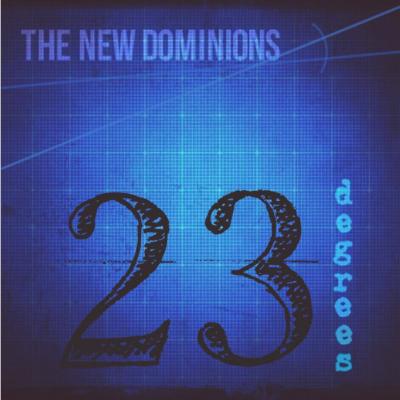 I really want to love this album. The New Dominions have some really good things happening with 23 Degrees. Its misfortune comes in the shape of production choices. Will you enjoy listening to this album? Yes. Could you enjoy it a lot more? Oh yes!

For starters, let me commend the New Dominions on Chandelier. The group's arrangement is in the small minority of those who chose not to make it an even darker and more somber interpretation than it needed to be. This version has life, complemented by heavy drumming, a bevy of vocal effects, and Jennifer Arcilla's solo that leaves everything on the track.

After this opener, I ran into my issues.

So much of this album feels right, and I can easily discern where the group's intent lies. The problem is a balance in voices, and sometimes overproduction. It's not terrible, but I'm left completely guessing what my ears should be focused on.

While the album has a strong level of energy, it remains constant, almost without change. Nearly every track starts at a forte, with little variance in dynamics. Even ballads such as City, which has a lighter touch, is too in-your-face. The saving grace lies in the soloist, who in spite of these obstacles, keeps the lead well-controlled and not over-the-top.

Tracks like Gone, Gone, Gone and Free are unfortunately prime examples of the production imbalance. The former suffers from backing voices being too far back in the mix, and at times it's difficult to distinguish the bass from the vocal percussion lines. The latter showcases another good lead, but the low-end of the mix is processed too much, losing a lot of the human appeal.

Things begin to dial down a bit by Goodbye In Her Eyes. The opening is a bit more satisfying and sets things up nicely for the lead's lighter voice. The backing group is still overpowering at times, but a pulse is finally grasped by the midway point. See You Again is a bit sterner than other tracks, but has an unmatched support system from the backing groups that allows the lead to deliver some much needed emotion called for by the song.

Come Sail Away may be the only track, outside of Chandelier, that actually feels completely right. The entrance is surprisingly lighter than other tracks, and the intensity generally matches what is called for by the song. The lead's range is fitting as Styx tracks are notorious for being challenging.

All said, 23 Degrees has appeal and is likable. But this release could be so much more. I don't want to speculate, but somewhere along the way, the production got a little too ambitious. Still, with some minor volume and EQ adjustments, there's plenty to enjoy.

23 Degrees is an album that's really hard to place. It's pleasant, upbeat, and plays pretty cohesively start to finish, but it stil feels like it's missing that extra essence of ownership to distinguish it from other pop cover albums. I think what prevents it from entering the pantheon of "4" is that while there's nothing glaring to point to from a technical standpoint, the album sounds just a bit too tidy, too safe.

Starlight is a good example. It's got a solid soloist leading it and the background is well-coordinated, but the delivery is just too light, airy, almost casual. It isn't that this sounds bad per se, but rather that it feels like there's a mismatch in intensity between the soloist's delivery and the surrounding track. I can't say for sure whether it is intentional, as I don't find it coming across deliberately, but the backing vocals need some measure of tension to properly relate to the soloist and drive the direction of the song. Around the 3:00 minute mark there is a brief shift in intensity thanks to the percussion, but by then the song is practically over. When you consider the song runs four minutes on the dot, there's not enough variance here to keep the listener's attention.

See You Again is probably an even better example. The initial set up is great. The "tin-tin"s add a nice texture over the top of the lower ranges and succeed in adding some rising tension, but when things pick up volume wise around 1:17 for the first chorus, the release is sort of underwhelming. The soloist has a really sweet tone and touch to her voice, but I would have liked to hear even more tenacity or a sense of longing to push it across the "4" threshold.

Still, 23 Degrees isn't without its moments, it's just that those moments come and go. Still Into You is a personal favorite. It's got catchy rhythmic backing syllables that propel the song along. The percussion is crisp and punchy and the soloist sounds engaged throughout. It's exactly the kind of energy and intensity that should've been present throughout the whole album. Other songs I'd recommend include Gone, Gone, Gone, Chandelier, and Come Sail Away.

What's holding 23 Degrees back is consistency in energy and intensity. Most of the time, the key to singing covers is to really sing it like you wrote it, like it's about you. It can be a difficult hurdle to clear, but once that happens, the world is yours.

Having reviewed Porch Time from The New Dominions, I walked into this new album cautiously. There was a lot going on then that I didn't particularly care for, and in the end, I had hoped for a lot more. With 23 Degrees, I'm getting some good things, but mostly more of the same problems as before: lackluster arranging, weak intention, and mediocre at best dynamics that end up creating a purely "Average" product, despite clearly showcasing the talent to be something stronger.

The soloists improved greatly. I'm a huge fan of Tim Carroll on Starlight; he takes complete control of his part and it works. Charlotte Eveleth takes a beautiful turn on City, one of my top five Sara Bareilles songs and no small order to take on. But Kerry Johnson takes the cake on Still Into You, executing the best dynamic control of the album with a beautiful piano softness in the post bridge. Gorgeous. Four for you, Kerry Johnson.

While Porch Time barely made the cut for a "3", 23 Degrees clears that hurdle easily, but can't get much farther. What I'm getting a lot more of on this album is life and attitude, which I do give James Gammon some credit for. There's not enough uniqueness and skill of execution to overcome the low tracks, though. What A Catch, Donnie is nearly five minutes of the same uninteresting syllables and leveled out dynamics that make the inclusion of a Landslide descant meaningless at 4 minutes and 20 seconds in. Goodbye In Her Eyes is the big album sinker, with a plodding quarter note bass line that disconnects the pace of the song and completely saps the drive from the ballad.

Granted, there's some variety in song selection. I don't usually get Styx on a modern album, nor Delta Rae. That being said, if you're going to choose some Top 40 numbers, be sure to do something unique with them. If I hear a song fifteen times a day in my car on the way to work, why do I want to hear someone else cover it if they don't make it different enough to be their own?

While clearly stronger than Porch Time, I end up having the same major critique about this album: great for the casual consumer, but lacking anything special enough to really make you want to sell the product that is The New Dominions.