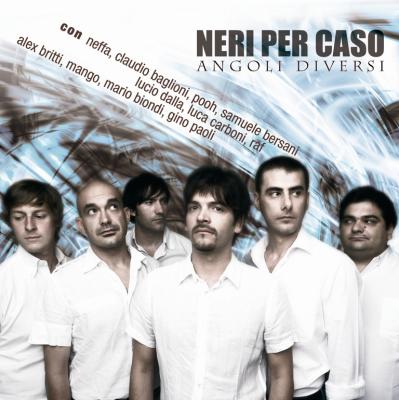 Neri Per Caso's new record is a great collection of music aided by a refreshing rare quality: it's not hung up on a cappella.

Angoli Diversi is clearly a vocal record, replete with "doo"s, "ah"s and handclaps. Yet the group never seems to stall there, like so many contemporary a cappella records, where the medium seems to muffle the musicality. Instead, we get a catchy and well-considered mix of chanson, pop and doowop nouveau, sung well and just about guaranteed to go over.

7000 caffè gets the album off to a terrific start. Warm and melodic, the song also dispenses with purism and takes advantage of a real guitar for a de rigeur instrumental break. Later songs keep the acoustic vibe going. I particularly liked the ballady Senza fine, which strolls along like a rainy summer European afternoon.

Risk-taking only turns up at the end of the album. The closer, Un grande salto, falls into the cheeseball a cappella trap, for all its technical panache. Its predeccesor, Ci vuole un fisico bestiale, has a neat Ladysmith Black Mambazo-esque hook, but loses my interest during a medley-style left turn about three quarters of the way through.

I've heard that Neri Per Caso has enjoyed a lot of cross-over success in Italy, like the mainstream listeners don't care that they're "just" an a cappella group. The appeal of this album makes it easy to see that kind of success.

Well, I guess you have to add Italy to the list of European countries where, unbeknownst to me until RARB came along, there is at least one terrific, professional a cappella group turning out some fantastic music.

"Neri Per Caso" translates into "Black by Chance" which refers to the group's early wardrobe choice and their matter-of-fact answer to the question of why they wore it. There's nothing matter-of-fact about their talent, however, and if they don't quite have the polish, versatility and consistency of the very, very best groups in the world, they certainly have flashes of brilliance which call to mind the "heavy hitters" of international a cappella such as baSix, The Real Group, or The King's Singers. Tuning and blend are superb throughout. For the most part, harmonies and grooves go seamlessly and effectively from straightforward to jazzy to funky. There's an unmistakable energy brought to all of the music which makes it, perhaps above all else, unceasingly infectious.

What makes this album even more remarkable is that Neri Per Caso is essentially "the band". That is, Angoli Diversi is actually a collection of Italian singers and musicians fronting Neri Per Caso, with the group itself serving as the backup singers and vocal instrumentalists. Having never heard the group before, this didn't bother me much because 11 guest artists translates into a fair amount of diversity of styles, both in composition (almost always by the guest artist) and in arrangement (typically by group). Direct interpolations of songs like Grease and Kool & the Gang's Too Hot Baby figure prominently, and there are many allusions to artists such as varied as The Beatles (Piccola katy), Abba (Balla balla ballerino), Vangelis, Simon & Garfunkel and Ladysmith Black Mambazo (all in Ci vuole un fisico bestiale). Even on tracks that nagged at me a bit — the guitar in the opening track (even though its author is a guitarist), the asthmatic Barry White-sounding Michael McDonald imitation from Mario Biondi on the sole English track — the music never failed to get my attention and hold it. That there is nary a track much longer than three minutes helps too.

More troublesome is the lack of any English translations for the songs which certainly would have added to my appreciation. And indeed, my understanding of what was going on here — the use of the guest artists and such — only truly became clear when I did some independent online research of the group and of the artist names shown on each track after the words "con la partecipazione di". But hey, that's what RARB is for. We do the heavy lifting so you can concentrate on the music. And this some great music. You may not understand a word they say, but it's pretty hard not to enjoy.

Neri Per Caso, a men's sextet from Italy, has achieved what most professional music groups (a cappella or not) in the United States only dream about. They've sold 600,000+ albums and have been performing to huge crowds for well over a decade. Their latest release, Angoli Diversi, is a cover album of 11 tracks, done with the collaboration of 11 prominent Italian artists, including Mango and Pooh. I don't know who those two are, but I like their names.

Every song is in Italian, except for What a fool believes, which, along with Senza fine, is the only familiar tune (Dean Martin covered the latter in the '60s). Nothing is lost in translation though, as Italian is a silky language and reading their tax code aloud would probably sound sexy.

The arrangements are effortlessly performed, and written by group members/brothers Ciro and Diego Caravano. The brothers throw in some Michael Jackson and Grease into the arrangement of Bella d'estate and some spoken words from Yellow Submarine in Piccola katy, but for the most part the arrangements focus on polished harmonies.

Neri Per Caso sings with an infectious energy and skill that does not fail to entertain, and it is unsurprising that they have achieved such renown in Italy. Angoli Diversi is definitely a success musically, and if their collaborators are as famous as Wikipedia says they are, than I am certain this album is also a commercial success.

To order this album, visit A-cappella.com or Amazon.com.