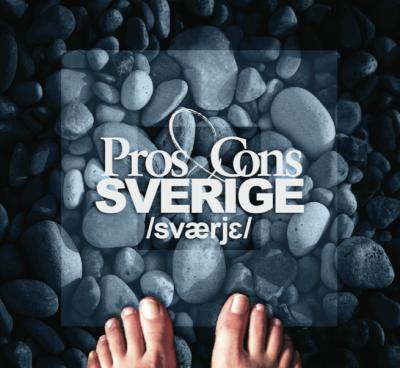 Pros & Cons received two key pieces of advice in RARB's reviews of their previous album, Safe & Sound. The group was encouraged to "delve deeper into its Swedish background" and to increase use of "dynamics, interesting interplay between voices, [and] unexpected melodic changes". Perhaps the group took this advice to heart, putting forth a beautiful tribute to Sweden, as well as a darn good a cappella album.

Sverige opens with a single tenor. His passionate vocalization is echoed and joined in turn by other singers, until the five men of Pros & Cons demonstrate their skills in building complex harmonies. This ear-catching introduction moves into a jazzy interpretation of Ack Värmeland, Du Sköna, a Swedish folk song that received lyrics in the early 1800s. Previous jazz takes on the piece are also in English (as Dear Old Stockholm) by Miles Davis and John Coltrane, among others.

Sverige is essentially a seven-song ode to Sweden ("sverige" is "Sweden" in Swedish). Some Die Young is originally performed by top Swedish singer-songwriter Laleh. Fredmans Epistel N:o 81 dates back to 1790s Swede and cittern player, songwriter, and poet Carl Michael Bellman. Dancing On My Own / Be Mine is a medley of two songs by Swedish pop artist Robyn.

Så Länge Skutan Kan Gå is a piece by troubadour Evert Taube, a respected Swedish musician from the early 1900s. How respected? His face appears on the 50 kronor banknote! Calleth You, Cometh I hit #2 on the Swedish singles charts and is originally by Swedish rock band The Ark. The Pros and Cons version includes a stunning cello accompaniment and solo by established Swedish cellist Amelia Jakobsson.

The album closes with title song Sverige, which was composed in the 1890s for a national anthem contest. Though no winner was selected, Sverige endured and is sung every New Year's Eve during the Swedish equivalent of the New York City's Times Square celebration.

The arrangements are anything but monotonous and simple. Joel Bexelius, who arranged every song, works the voices of Pros and Cons to the fullest, both dynamically and musically.

There is something lovely in the constructive critiques RARB gives being so clearly addressed in a subsequent release. While the liner notes do explain (in English) that Sverige was meant to be an "album that shows the beauty of Swedish melody-making over time", I do wish that more than the title and composer had been given for each piece, especially for the non-Swedish listener. Thankfully, Google Translate helped me fill in the gaps.

It's not everyday that a group is able to combine nationalistic folk tunes and pop covers seamlessly within the same album. With Sverige, Pros & Cons employ many pleasantly unique and unpredictable elements to engage listeners at all levels of musicality.

The album is magnetic from the very first minutes: the epic introduction of Ack Värmeland, Du Sköna could begin any song and make it exponentially more exciting. Furthermore, some of the intervals from the introduction are featured later in Så Länge Skutan Kan Gå, which contributes to album unity in a positive way. The mastery of the first track does not end with the introduction. Pros & Cons varies textures and explores multiple voicing combinations within its five-man structure. The end result is a tune presented in multiple variations, including mixed meter, which often obscures a discernible pattern and keeps the listener engaged.

As a group, Pros & Cons also displays excellence in four-part vocal writing throughout the album, epitomized by its closer, the title track. This beautiful tune employs chromatic lines in a smooth way for its singers and varies texture between verses, never becoming too static. The instrumental bridge in Calleth You, Cometh I tastefully includes some real string parts for contrast and uses its vocals as a sort of instrumental shout chorus before combining both as accompaniment for the closing refrain. This is an expert use of the recorded a cappella medium to create an enjoyable listening experience. The group's quality rhythmic writing is on display in Some Die Young, with a catchy repeated rhythmic line effectively paired with vocal syncopation.

On the other hand, a few spots are a less brilliant than others. In a few places, there exists some monotony, such as the long instrumental sections in Fredmans Epistel N:o 81, which detracts from the track overall. Så Länge Skutan Kan Gå features clearly intentional background dynamics, but the solo line sometimes trudges through the triple meter and could use some more effective phrasing throughout. English language phrasing is quite good on this release, but a couple of spots do not sound natural. Solos on this album are not flashy in general, but they do communicate emotion well within the simple style intended.

The sampling of songs presented in Sverige is diverse, arranged innovatively, and executed cleanly. Pros & Cons should be applauded for its bilingual release, and listeners of all cultural backgrounds should pick up a copy of this album (or at least stream it) as soon as possible.

As you might guess from the name, with the album Sverige the all-male outfit Pros & Cons is paying homage to their fatherland, Sweden. In an attempt to give their audience "a glimpse of the great Swedish songwriting tradition", as they say themselves, they have compiled a selection of both traditional tunes and modern pop songs, interweaving elements of the two throughout the album to instill a sense of "Swedishness" in the listener.

The album alternates traditional Swedish songs with more mainstream Swedish pop music in English, and even though there are no jarring transitions, there's still a noticeable difference between the types. Neither is better or worse than the other — personally, the more varied arrangements of the Swedish songs generally speak to me more, but I still prefer Some Die Young, underscored by a combination of body and vocal percussion, to Fredmans Epistel N:o 81, whose pop rock arrangement doesn't quite capture the emotional depth necessary to convey the powerful message of the lyrics even to those who don't understand Swedish (or were given a translation, like me).

The Swedish tracks also all incorporate elements of a folk chant, which ties the album together very nicely. This chant also opens the album, although it was not given a separate track listing but stuck in front of the first song Ack Värmeland, Du Sköna, despite being unrelated to it — maybe in order not to break the alternating pattern between Swedish and English tracks. There's also some cello on the penultimate track Calleth You, Cometh I, so purists beware! I'm not sure it was necessary, but I don't think it's doing any harm, either.

In the end, the marriage between the folk songs and pop hits, Swedish and English, works fairly well, which must be credited to the song selection, arrangements and production by Pros & Cons mastermind Joel Bexelius. A concept album full of covers is not an easy project to pull off, but it works decently enough.

Sverige is a solid album overall, and I have no major complaints — however, there's also little that excites me about it. It sounds Scandinavian, it exposes me to Swedish music I didn't know before, but it doesn't inspire me to explore further. Its contemporary approach to traditional material is pleasant, but it doesn't excite me. It often feels like Pros & Cons only went part way — I wonder how good they could be if they dared to go all the way.