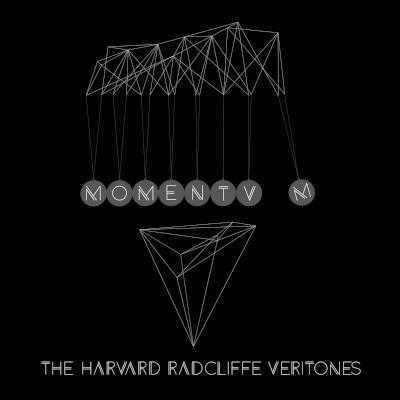 The Harvard-Radcliffe Veritones frontload MOMENTVM with their three strongest songs. In the digital age of single-track iTunes downloads, this is not a bad strategy. It is the Veritones' best chance at snagging that elusive full album purchase.

It is not a coincidence that William Horton arranged all three of the frontloaded tracks. He keeps aural interest high by integrating and alternating among supportive harmonies, unison, and syncopation. He makes use of silence. He passes moving lines between voice parts. His choice of syllables and use of lyrics is skillful. In short, Horton's arrangements are what make these tracks stand out.

MOMENTVM opens with a clever and seamless mash-up of Don't Wake Me Up by Chris Brown and Wake Me Up by Avicii. It is followed by Change, an almost criminally repetitive trip-hop number that Horton livens as best he can with a dynamic arrangement. Up next is Pendulum, which opens with the entire group singing the hook. They move from unison to harmony and back to great effect before the outstanding soloist joins in.

When Black Horse and the Cherry Tree follows, the sound is hollow in comparison. The rest of the album follows suit, hindered by thin arrangements or serviceable but uninspiring soloists. Both Pretty Hurts and Wings are inexplicably missing the low end. Every song is midtempo or slow. It works as background music but not for active listening.

Unlike some college a cappella groups, which lean toward vocal performance majors who treat the group like a professional endeavor (because perhaps for them it is), the Veritones have broad interests. No less than five current members are majoring in some form of biology, and their website touts their diverse activities beyond music.

MOMENTVM captures a moment in Veritones history. It reflects their hard work and dedication to the group and to each other. The average listener, however, should just download Pendulum.

MOMENTVM, the latest from the Harvard-Radcliffe Veritones, is what I would call a solid yearbook album with a few standouts scattered around. For an album with thirteen tracks, that's a pretty decent accomplishment. I'm sure the group could have decided to focus on the four or five top songs, but the yearbook format gives more opportunity to highlight group members, and the Veritones showcase a strong roster across the board.

The majority of the arrangements are provided by members William Horton and Hannah Mohd-Amir, with a handful of contributions from other members. Every song is led by a different soloist, although a few names appear a couple times as either supporting soloists or featured harmony lines. Vocal percussion duty is also split between a number of group members. All of these point to the depth of talent present in the group.

This strength is probably why there isn't really a song on MOMENTVM that falls flat. Sure, there are some that fall into the "nothing to write home about" category (Morning Comes, Chasing the Sun, Come Back Down), but there are enough gems in there that the album as a whole doesn't end up suffering from its length. Some of these showed up where I least expected them, too. Black Horse and the Cherry Tree, for example, could easily get stale quickly, but the arrangement keeps things moving and the track is really stoked up by a fantastic group performance.

To me the strongest track on the album is Pretty Hurts, which I think is due in equal parts to the singers and to the excellent mixing. This is the type of recording you'll want to break out a good pair of headphones for. The solo, especially when it first comes in, is just so real and raw that it took me a little by surprise the first time around. Bravo to Sandy Uwimana for the powerful performance she brings to the table. And bravo to Horton, who along with members Jason Friedman and Niya Avery, produced an album that really spotlights each one of the Veritones' members.

The Hardvard-Radcliffe Veritones showcase another collection of hard work and artistry in the full-length album MOMENTVM. As an ensemble, this group of talents gels quite well together, though the arrangements are mostly non-arc presenting without really attempting to give a "wow factor" climax. As for the solos, there are notable moments for some but most of the time they do not really shine. In general, the female vocalists are stronger than the male vocalists.

I particularly like the part where the ensemble sings "I don't wanna, I don't wanna, I don't wanna, I don't wanna fall, fall, fall, fall, fall, fall asleep" in (Don't) Wake Me Up. It shows how the entire chorus sounds tight together by singing the same lyrics in harmony. Hannah Mohd-Amir and Niya Avery come out strong in Say You Love Me, backed up by a solid group in the background. Pretty Hurts lacks the emotion that you would expect; it's too mechanical for me. It's similar to Come Back Down where it seems like the singers just read their lines off straight from the sheet music for the first time. I do appreciate Jason Friedman's attempt at giving an emotional performance of Imagine Dragon's Dream. The vulnerability turns out to be a thing of beauty regardless of some vocal flips that should not be there. With a bit more diaphragm support, he could have probably done better. Lastly, the trio of Hannah Mohd-Amir, Niya Avery, and Sophia Wennstedt's voices is too compressed in Wings. The trio is not singing at the same tempo, which ruins the harmonic value — especially when the bass is added towards the end of the song.

The vocal percusssionists have shining but inconsistent moments throughout this album. To me, good a cappella is usually backed by a strong vocal percussion and bass tandem which seems to be lacking in most of the tracks in this album — except in Chasing the Sun.

A couple of songs here lack a bass that's fat enough to support the chords (Dream and Fire). In fact, the basses and tenors are sort of buried in the mix while the treble voices continually overpower the lower voices. Having said this, the entire album seems to lack sound consistency; most of the panning is not evenly distributed to fill the gaps. I guess there should have been more emphasis in spreading the voices a bit since the digital space is vast enough to contain these young vocalists.

In classical mechanics, MOMENTVM is the product of mass and velocity but the overall weight of the tracks in this album is a bit unsteady, making my rating wobbly as well. The "raw materials" are already here but the sound is still young (though full of potential). The Harvard-Radcliffe Veritones' MOMENTVM has some nuggets to nibble, and I'd like them to take it to the next level on the next release.