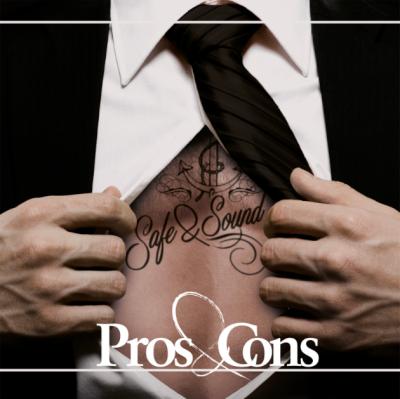 Pros & Cons made a six-song record that sounds like the soundtrack for two different movies. Pirate and Euphoria in particular sound like they'd match nicely with a cartoon adventure movie, something featuring a plucky lead character, a band of sidekicks and possibly an uplifting moral at the end. No Other Like You belongs more to an '80s light drama, maybe something Brat Pack. The others could go either way. This record has a nice sound, the sort that goes with good hair and sparkling teeth.

No Other Like You, an original, is the nicest song on the record, both in strength of songwriting and in the wonderful solo. I'm not sure which of the guys sings it (Pär Thored, the songwriter, would be my guess) but he's got a lovely voice and makes the most of a very nice melody. The background isn't perfectly tuned, but once the lead comes in I stop caring.

In contrast, Don't You Worry Child, one of the covers, uses enough auto-tune to approach Cher territory. It sorta works with the song but does set the stage for the tuning ebbs and flows to come. The other originals are also inconsistent. The Swedish one sort of slides by without making much of an impact, and I'm not sure the central image of Pirate works well for an adult audience. You can take the pirate out of the ocean, but you can't take the ocean out of the pirate. Wait, what? Pirates are on boats! They only end up in the ocean if they walk the plank! I think this song could succeed if it were set up properly by our aforementioned cartoon hero/heroine. On its own, maybe not so much.

This Swedish vocal band deserves credit for making a tight and well-conceived album. Half covers, which should help sales, and half originals, which helps on all the other levels. Pros & Cons sings well and sounds good and I look forward to hearing the next endeavor.

Pros & Cons is a five member all-male Swedish a cappella group. Safe & Sound is a strong EP, with a lot of good things going on. As I listened to the album, I was reminded over and over again of the Finnish group Club for Five. That's a good thing — I quite like Club for Five! Both groups have a classic a cappella sound, employing few studio tricks. Vocal percussion is used, but not overbearingly. The male soloists have similar tone qualities. Even their arrangements seem similar to me, with the exception that Club for Five is a mixed group. Both groups have a fairly minimalist arranging style with individual voices being prominent and not a lot of texture in the accompaniment parts. Part of that is undoubtedly due to the relatively small group size of both groups.

The singing is quite good and pleasant to listen to on Safe & Sound. However, moments that make one sit up and take notice are few and far between. There is not a lot of use of dynamics, interesting interplay between voices, unexpected melodic changes, etc. Given the obvious high quality of voices and musicianship, this aspect of the album is a bit disappointing.

The song choice is well within the range of my own personal pop-rock a cappella tastes, so the album gets high marks from me for repeat listenability. The one song choice I really question is Fireflies — really, if you're going to record a song that has been covered to death, you need to turn the creativity knob up to 11! And they don't — this version is essentially just like the six other versions I've got in my collection. One interesting choice is Pirate, a rollicking anthem with lyrics such as "You can take the pirate out of the ocean but not the ocean out of me". I'm nearly certain I've heard the song before, but since a Google search for that phrase came up completely empty I guess it's similar to a case of seeing someone with a "familiar face" that you think you've seen before.

In short, this is a very good album, perhaps even an excellent one in many respects. But I wouldn't call it a "must have".

With mixing and mastering help from Bill Hare, Pros & Cons offer a solid, yet monotonous release with Safe & Sound.

Safe & Sound starts with a simplistic version of Don't You Worry Child. It's an interesting arranging choice for Pros & Cons but not necessarily the best track to start off this release. The organic nature of the arranging is refreshing but doesn't match the vocal skills of Pros & Cons. Many times I found myself critiquing the performance of individual singers; every stylistic choice, every vowel placement comes under close scrutiny with Safe & Sound. It should be noted that Safe & Sound was completely arranged by Joel Bexelius. Every track has a unified sound; an accomplishment for Bexelius and Pros & Cons.

Bexelius' arrangement of Fireflies combined with the solo performances is different enough while staying true to the original. Safe & Sound finishes with another original, No Other Like You, this time featuring the songwriting abilities of Pär Thored.

With the group's next release, I would like to hear Pros & Cons delve deeper into its Swedish background and harness what makes this group unique; it will make for an fantastic release.

This album is available on iTunes and Spotify.