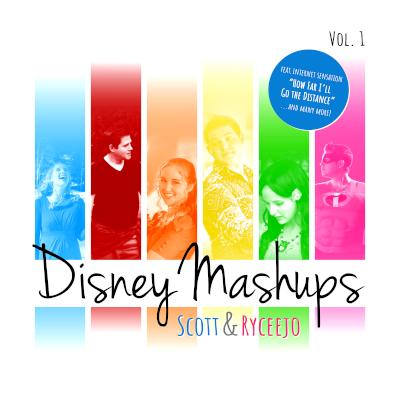 Disney songs are a genre unto themselves. They sew together the catchiness and thematic universalism of pop hits with the playful twists and plot-driven contextualism of show tunes. It is a genre that transcends generations with lyrics children proudly memorize for the first time and grown-ups nostalgically never seem to forget. With their theatrical appeal and recognizable melodies, Disney and a cappella are a match as inevitable as Tarzan and Jane. Enter Scott and Ryceejo.

Scott and Ryceejo began singing together in choral groups at Brigham Young University, and have since gotten married, started a family, and risen to YouTube stardom together. In 2016 they released La La Love, their ten-track debut album characterized as "bright", "lovey-dovey", and "starry-eyed". Sounds a bit like Ariel or Aladdin, right? This self-described "husband and wife music duo" has developed a stage persona (presumably reflecting a real life persona) every bit as darling as a Disney story, with voices to match. These singers have voices on the higher end of the register that consistently ring clear and blend beautifully with one another. They are expressive without being melodramatic, and sell all those out-there notes and conversational interludes that make musical numbers what they are. Easy "5"s for solo and blend.

Disney Mashups, Vol. 1 also scores high on production value. In addition to leads, Scott and Ryceejo personally take credit for just about all the backing vocals and percussion, arrangements, and post-production. To be so involved in the whole process is impressive, to do it at this caliber is downright Herculean. Despite overdubbing the same two voices over and over, the tracks sound full, dynamic, and even achieve various timbres to suit the occasion.

No Disney story is complete without something to overcome. Scott and Ryceejo don't need to save their fairytale kingdoms or prove something to their stubborn family members (we hope), but they do need to find a way to make their music less predictable. If you were scrolling through YouTube videos looking for novel takes on Disney classics, any one of these tracks would tug your heartstrings. Put them together, and the arrangements immediately feel as formulaic as, well, the Disney catalog. Though it is interesting to hear how often Disney recycles themes and character templates, and how easy it is to overlay perennial favorites, such repetition detracts from the otherwise infectious sense of energy and creativity Scott and Ryceejo bring to their music.

If you love Disney tunes, or are just in the market for some uplifiting a cappella, Disney Mashups, Vol. 1 is for you. At their best, Scott and Ryceejo have mastered the art of extending irresistible melodies into full-length listens. Everything comes together in Where You Are / Under the Sea, How Far I'll Go / Go the Distance, and The Incredibles Medley (arranged by David Fowler). When the formula goes awry, as in Mother Knows Best / In Here and Remember Me / You'll Be In My Heart, it makes you wish they would just do one really awesome song instead of shoehorning two into something less than awesome. Excited to hear Scott and Ryceejo hone their strengths, work out their weaknesses, and incorporate even more of their growing musical family in Volume 2!

Before I get into the review of the record, a fair warning to our readers — if you are not a super Disney fan, this may not be the record for you. With songs from almost fifteen different movies, ranging from The Little Mermaid to Coco, this album is truly a Disney lover's dream with so many classics to belt along to.

From the first mashup to the last, it's clear that Scott & Ryceejo are at least as big of a Disney fan as I am, if not more so. The songs have been recorded with such emotion and passion that Walt himself would be very proud. And with the exception of The Incredibles Medley, Scott and Ryceejo arranged all of the tracks on the album. They did a great job in pairing tracks with similar messages and emotions which allows for easier transitions within the mashups. While a few strong arrangements really stand out, others do not land as well from a structure/layout standpoint.

Taking the first mashup, Where You Are / Under the Sea, the first couple minutes of this release starts with Scott and Ryccejo singing each song individually. There is a quick overlap in songs around the two-minute mark, but the mashup really starts around minute three. With Ryceejo singing the bridge from Under the Sea and Scott singing a verse of Where You Are, the songs get lost with the addition of background vocals and percussion. Rather than a duet where both parts come through equally and clearly, this short thirty-second block becomes a wall of sound where picking out a particular voice part or even individual words becomes difficult. In the next track, Scott and Ryceejo's blend during For the First Time in Forever and When Will My Life Begin at the two-minute mark doesn't fit as well as it could, and I can't put my finger on what's not clicking. Whether it's the staggered endings at the end of sentences between the two of them, or maybe I am just hearing one of the songs in a slightly different tempo in my head, the mashup just does not blend as well for this verse. However, when both songs hit their choruses, the concerns that I have go away.

I do not have concerns with all of the mashups, and many of them toward the end of the album are fantastic all the way through. The final track, combining You'll Be in My Heart and Remember Me is simply stunning. No background vocals or percussion — just Scott and Ryceejo singing the two songs to each other in beautiful harmony and seamlessly trading the songs back and forth to one another. As a big fan of Disney villains (mainly because they sing the songs that I can easily sing as a baritone/bass), I was particularly interested in hearing Mother Knows Best / In Here, and Scott and Ryceejo don't disappoint by channeling the cunningness and emotional ranges of both Mother Gothel and Judge Claude Frollo. This is also one of the only tracks on the record where the arrangement does not involve the two individual songs being intertwined, and I like that the two leads made that choice. Instead, it reads as if the villains are speaking to Rapunzel and Quasimodo at the same time to not spread their wings (as if their stories merged within the song), and it is such a clever way to arrange the piece.

In fact, that is what makes Disney Mashups, Vol. 1 so impressive. Even on an album that is only mashups, each song is arranged in a slightly (or sometimes very) different way that keeps the listener engaged and interested to see what the next arrangement is going to bring. I cannot wait for Volume 2 to come out, which hopefully will feature some of the older classics.

Scott and Ryceejo are a married musical duo who seem to do it all when it comes to the making of Disney mashups, and this album is an excellent testament to their many talents.

The best mashups don't just fit together musically, but add something to their originals by enhancing the meaning in some way, and every last one of these mashups does exactly that. It's difficult to point to specific examples, because each pair of songs matches beautifully in both music and meaning, but a standout moment is the use of complementary lyrics to transition between segments of When Will My Life Begin and For the First Time in Forever.

The arrangements are ambitious, and rhythmically busy, but they are written and executed so flawlessly that the many musical themes never overwhelm one another. This is a tiny nit to pick, but the only time I notice any muddiness in the rhythm is at the very beginning of How Far I'll Go — some of the simple, struck chords in the background don't land in unison. It's never a problem again, but in an otherwise rhythmically clean album, small imperfections draw the ear.

The only segment I find a little underwhelming is the first part of I Just Can't Wait to Be King. After a strong opening with the use of barbershop quartet vocals, the energy of the soloists seems to drag. This could be due in part to the tempo: the general frenetic drive of the original has been relaxed to match with Almost There. Perhaps the lax energy, especially in the spoken lines, is a response to that, but the track more than makes up for this momentary lag, particularly with its very satisfying transition into the mashup proper.

There is so much to commend on Disney Mashups, Vol. 1. The instrumental Incredibles music put to voices is just one of the many testaments to Scott and Ryceejo's many strengths — brilliant arranging, flawless musicality (that humming section!), and clean editing to create a polished final product. The vocal counterpoint in the many contrasting solo lines is beautiful and interesting. The background vocals in Mother Knows Best are a standout on an entire album of standouts. The simple choice to follow Mother Knows Best / In Here with Out There / Part of your World is so emotionally satisfying.

I cannot say enough good things about this album. Every single track is a masterpiece, as is the composition of the album as a whole, and I could not be more thrilled to sing its praises. Thank you so much for your work, Scott and Ryceejo; you have certainly gained a fan.