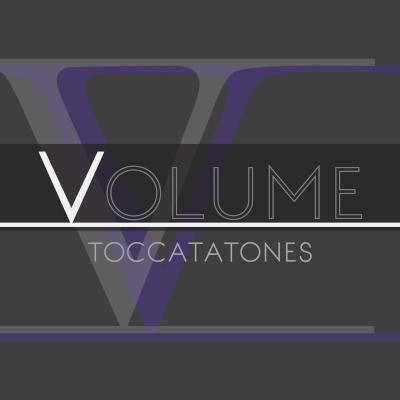 Volume is more of an up and down ride than I expected from this solid all-male collegiate group. The vocals and studio work are largely consistent: when things turn sour, a weak arrangement is usually the culprit.

Here is the roller coaster you board with Volume. The Toccatatones kick off their album with a catchy presentation of Geronimo. The background patterns add depth and eloquence, and the tenor parts are gorgeously scored. Then Crash into Me trips and falls with really repetitive, boring background parts that make the song quite bland in comparison to the album's opener. Love You Madly picks up in energy, but the cluttered arrangement has too many textures and rhythmic elements competing for the same space. But we're back up again with a gorgeous lead and glorious studio work for Goodbye. We don't get to stay long in this sonic space, though, because the very simplistic arrangement for Everytime We Touch sounds more appropriate for a youth choir. Wear Me Out is a compelling song, but the soloist is trying to channel someone outside of his natural voice with an over-the-top crooner style; the same out-of-voice experience happens with the lead on Ten Feet Tall, who prefers yelling to singing (better to go full-on than be timid, though). We conclude with a ho-hum interpretation of Go Big or Go Home, and then a very slick sounding Can't Feel My Face that sounds a bit out of place from the tracks that precede it. Up, down, up, down, round and round, but never steadily enjoyable. For a 5th album, it should be more consistent. Also missing: thorough liners that credit songwriters, and a clearly defined production team that credits roles associated with the names instead of lopping them into a general Thank You section.

With good musicianship present, it shouldn't be hard for The Toccatatones to elevate their charts for a stronger recorded package.

There is one song that is uniquely Toccatatones. Love You Madly, originally a Cake song, reminds me of the qualities I enjoyed about Ever After. It has a theatric otherness. It has gusto from the get-go. It has not one, but two "instrumental" breakdowns that transcend the lyrical nature of a cappella and pull you headlong into the groove.

Can't Feel My Face almost does the trick. The track sounds awesome. It is the kind of song that you want to hear again and again, but it is not the kind of song that will make you want to go out and find more by the Toccatatones. It is probably not a coincidence that this is the one arrangement on Volume credited entirely (Where Are Ü Now gives partial credit) to Alex Green and Alexander Koutzoukis of Plaid Productions. While outsourcing arrangements can be a great way to get inspiration and bolster your repertoire, it is inevitably not going to capture the idiosyncrasies that make you THAT group.

The other eight tracks are more or less indistinguishable from one another. The bad news is that the lyrics and themes are generally generic; jejune to the point of just skipping ahead to Can't Feel My Face. The good news is that Green and Koutzoukis do a phenomenal job with editing and mixing, so that the entire album sounds clean and clear. They add some subtle effects, as with the "dee dee"s in Crash into Me and the "da da"s in Everytime We Touch, that make the arrangements more interesting without overshadowing the vocal blend. For the majority of the album, the Toccatatones take a very safe approach to music-making without venturing into anything too great or anything too awful.

Needless to say, playing it safe rarely makes you THAT group. To be THAT group you need to arrange and perform and record something that you have probably never heard done before. Sometimes it comes naturally, sometimes it's intentional and sometimes it's a stroke of luck. However it happens, it winds up being music that makes audiences instantly want to know, and then never forget, the group behind it. Though Volume is not a breakout album, it proves the Toccatatones are never more than a few breakdowns away from being THAT group you just gotta hear.

Volume, as an album, should be so much better than it is. Talented singers, great blend and an all-star production and mastering team is usually a recipe for a very successful a cappella album. The problem is that Volume is so inconsistent and volatile in how it utilizes these tools. It ranges from truly inspired and driven to a mad jumble of half-baked ideas.

Glimmers of strong potential in the Toccatatones definitely show throughout. Geronimo is a good way to kick-off the album with high intensity and a strong soloist in Anthony Boucher. Goodbye and Go Big or Go Home also utilize the background vocals really well. It's very possible, however, that no one is more aware of the group's potential than Plaid Productions, who contributed the two strongest arrangements to this album: Where Are Ü Now and Can't Feel My Face. Both are incredibly aware of where the group's strengths and vocal ranges lie, and the parts sung never feel arbitrary or forced. Norm MacDonald and Teddy Dallam also fit the two songs, respectively, incredibly well.

That being said, the low points of this album are also very distracting. For all the well-utilized solos, there are a few that don't really fit the songs. Everytime We Touch, Crash into Me, and Wear Me Out come to mind most easily. Additionally, there are extremely questionable arrangement choices in several of the songs. They feel arbitrary and purposeless, whether it's the add9 chords in Geronimo's choruses, the out-of-place half measure and extra Dave Matthews Band semi-mashed-in lyrics in Crash into Me, or a peculiar authentic cadence at the very end of Everytime We Touch.

In some ways, Volume unfortunately lives up to its name: the album never lets up on uptunes, dynamics stay quite high, and there's rarely a ballad to break up the intensity and add flow. Crash into Me, for example, should be one of its ballads, but it fails to be that because the arrangement and solo remain consistently loud.

Finally, there are significant problems with the album's liner notes and credits. Crediting original performers is not nearly as necessary as crediting composers and songwriters, and Volume includes the former while omitting the latter. There are some minor errors as well, such as Cascada's Everytime We Touch being listed on the album as "Every Time We Touch" instead of using Cascada's spelling. Far more egregious, however, is that Ten Feet Tall fails to credit in any capacity that it's actually a mashup, where choruses are taken directly out of Shadow by Bleachers. I had to do my own research and lyric searching to discover the mashup element, which is absurd.

Volume certainly has a lot of problems, but when it gets good, it gets ridiculously good. The advice I'd give to the Toccatatones would be to aim for intention and purpose in every song and arrangement choice. Right now, they have the tools that can grant them perfect scores — they just need to use them.