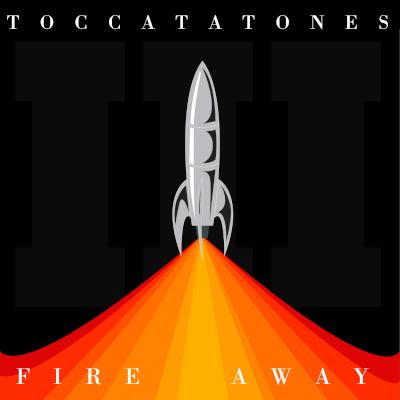 Fire Away gets a score of "2" because there are only two parts of the album that you need to hear. The first is the creative bridge in Come Sail Away that quite literally sails away into an ethereal exploration of syllables, filters, space, and dynamics. The second is the progressive, intricate arrangement of Ever After led by Chaz Duffy's riveting solo. These are moments you can hear again and again and still get lost in the depth of emotion and musicality portrayed by the Toccatatones. The rest of the album goes in one ear and out the other.

The Toccatatones start with a humdrum collection of songs. Nothing is particularly fast or slow, loud or soft, spunky or somber, aggressive or laid-back. It's all right in the uninspired middle where you are most apt to disconnect. Even songs that may have once wooed you, like Mexico or Without You, have been sapped of their charm by cover after cover through the years. To make you want to hear these songs, the Toccatatones need some crafty arrangements or powerful performances.

Fire Away has neither. NINE of the eleven songs start with a riff-establishing intro of cheesy syllables and eight of them end with a held-out chord of "oo", "oh", or "ah". The middle is filled with repetitive rhythms on distracting syllables like "jet je ne" in Moonshine or "dung da ding" in Home. These background parts are sung with about as much enthusiasm as it takes to keep the song moving, but not enough to make you want to sing along. The solos are just as disengaged and generally don't have a tone well-suited to the genre they are covering. The producers clean everything up nicely, but their liberal use of pulsing phaser effects only adds to the air of simplicity.

How did Ever After wind up at the end of all this? Come Sail Away is a teaser. It hints at the imagination and the bravado the group has in store. Ever After is the triumphant declaration that the Toccatatones are a unique group with the talent to really contribute to the sound of a cappella. It's composed of the same silly syllables ("vananana" in this case) and post-production filters, but the source material and the execution reflects a whole different level of sophistication. Most of Fire Away is generic collegiate a cappella you probably don't need to hear again. Ever After and Come Sail Away (but especially Ever After) are two opportunities to hear the spirit of adventure and drama that you won't hear anywhere else.

With the group's latest album, Fire Away, the Toccatatones of High Point University don't quite lift off, but they also don't quite misfire. The album starts with a high-energy, rousing cover of Who's Got the Moonshine. Indeed, if the Toccatatones had followed this with an album of all or mostly raucous, well-constructed tunes, they might well have something special. Instead, Fire Away proceeds through a collection of stylistically disparate songs arranged and performed with wildly varying degrees of creativity and verve. Unfortunately, this results in an overall product which starts and ends with "yeah!," connected with a whole lot of "meh."

It is hardly unique for a college group to compile an album with notable inconsistency, but it is nevertheless disappointing. Group member Jacob Talley, who arranged the opening track with Plaid Productions, seems to have the best sense of both his group's strengths (and weaknesses) and the necessity of dynamic structures. His arrangements of Ever After and Without You are atmospheric and interesting, and his Home bubbles along, fizzing with natural ebullience. Songs arranged by other group members tend to be repetitive (Magic) or staid (Mexico).

The inconsistency spreads to the performances on the backing vocals, which run from energetic (Who's Got the Moonshine) to lethargic (Mexico) and everything in between. The solos reflect another all-too-common foible in college performances. Some of these guys are obviously talented (Chaz Duffy on Ever After offers a standout performance, Talley is quite good on Who's Got the Moonshine and Walking in Memphis), but they and others sometimes fall into the classic trap of trying to emulate mannerisms of the original soloist and do so poorly. The truth is, pop singers often have unique voices and styles, and efforts to directly mimic those styles can sound awkward, forced, or flat-out bad. On the flip side, Talley offers a hint of twang on Walking in Memphis which is a different and welcome modification, and one that he could have emphasized more.

The Toccatatones also make a few sloppy choices in the presentation of this album. First, the jacket offers only the frustratingly inadequate "OPB" rather than the authors or composers of each song. Second, the group does not explicitly credit the production team other than generally thanking Plaid Productions and Vocal Mastering. Presumably Misters Green and Koutzoukis tracked and/or edited and/or mixed the album, but express credit is always deserved. Finally, the jacket has Mexico and Walking in Memphis inverted from their actual positions on the album.

Ultimately, making music is about creating powerful and compelling moments. Sometimes, the Toccatatones do this with energy (Who's Got the Moonshine), other times with smart, engaging arrangements (Without You), and occasionally with a heartfelt solo (Ever After). Unfortunately, such moments on Fire Away just don't come often enough.

Fire Away, the second release from the Toccatatones, is consistent but uninspired. Following Hits From The Pitch Pipe, Fire Away is neither a step forward nor backward.

The tracklist panders to the more overplayed songs of the past several years (Magic, Without You, Come Sail Away, Walking in Memphis, Home, and Ever After). But it also brings fresh takes to lesser-arranged songs (Who's Got the Moonshine, September, Keeping Me Guessing, Time is Love, and Mexico). The mixes are creative while remaining true to the original songs, and they have been enhanced by Alex Green, Alex Koutzoukis (Plaid Productions), and Dave Sperandio (Vocal Mastering) to give the listener everything that their studios have to offer. But is this enough to set the Toccatatones apart from the hundreds of other all-male collegiate a cappella groups?

The arrangements never seem to reach the talent level of the singers performing them. The Toccatatones are talented enough to take on more than transcriptions. The fascinating part about the arranging though, is the consistency of sound; a feat that even some of the most accomplished a cappella groups struggle with. With few exceptions, most arrangements are written by music director, Jacob Talley. Interestingly enough, Come Sail Away is credited as being arranged by a cappella luminary, Ed Boyer. Come Sail Away is strikingly similar to the version made famous by the Tufts Beelzebubs, featured on their album Pandæmonium for which Boyer was the producer and tracking engineer.

Fire Away is definitely not in my top ten, but it's not in my bottom ten either. To remain relevant beyond the hundreds of all-male collegiate a cappella groups doing the exact same thing and doing it better, the Toccatatones will need to find something unique to say with the group's next album.

Copies of Fire Away can also be purchased from the High Point University bookstore.