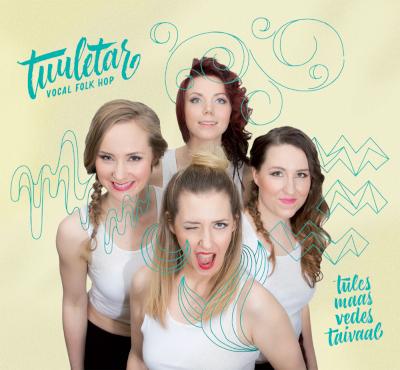 All-female Finnish quartet Tuuletar is named after the goddess of the wind. The group's sound is billed as vocal folk hop, but you may recognize it as World Music (an admittedly western-centric nomenclature). Finnish lyrics focus on and reference the natural world with haunting, whispering, and even piercing vocals that dance through tone and texture. Tuuletar's melodies are emotionally evocative and their arrangements are like paint on a canvas. But where this group truly rises above, establishing itself in the upper echelon of a cappella, is in its originality.

All eight tracks are penned by the group's members. Six of the eight have lyrics written or co-written by Piia Sailynoja and five have melodies composed at least in part by Sini Koskelainen with Venla Ilona Blom contributing another two and Johanna Kyykoski an additional piece. The result is a cohesive artistic voice, one more unified and more emotionally satisfying than the genre vocal folk hop might imply. The sound is a contemporary one in its harmonies and emphatic beatbox, but one with almost ancient roots, as the nature-inspired lyrics attest.

Those lyrics are, as one might expect, in Finnish. Thankfully, there are also English lyrics provided in the liner notes, but readers should know that they aren't exactly translations, but more poems inspired by the original Finnish. Of course, some Finnish is idiomatic, but there are also some real differences. Take Kohma where Sailynoja's original lyrics compare the growing coldness in a relationship with the frost in nature. By contrast, the English poem speaks only of frost and could just as easily be a commentary on seasonal affective disorder as on love. The originals, even with translative losses, are still preferable for their beauty and fuller storytelling.

Production in the 2010s is invariably technically proficient, no matter which aca-studio handles things. Almost never does an artist request a review and then deliver RARB a technical mess. Reviewers must judge production on its artistry now. It's a higher bar and a more elusive one than pure technical engineering. The production here feels solid but is occasionally just a step out of sync with the performances and energy of the group. Where Tuuletar is grounded, connected, powerful, and real, every so often their production feels a bit too shiny, canned, and artificial. Sometimes the drums lack dynamics or feel drum machine-like (the kick drum in Valkia, for instance). Sometimes the production adds a special effect (the end of Kohma, the bass of Tuu Kerää, the synth sound in Valkia) that has sonic appeal, but still feel disjunct and at odds with the group's core sound. These are relatively minor criticisms in the larger scheme. Once accepted, these choices can pass by, easy forgotten in repeated listenings. That's important because you will listen to Tuuletar repeatedly.

Many groups enter the studio with talent blemishes requiring more than a bit of studio make-up. Tuuletar is not such a group. Having heard them perform live as a judge when they competed in Aarhus, Denmark at AAVF, I can testify: these women have mesmerizing voices and a truly beautiful sound. Tules Maas Vedes Taivaal is a golden opportunity for the world to finally enjoy Tuuletar's rare and very original gifts.

Tuuletar is an all-female Finnish vocal quartet, and its first album Tules Maas Vedes Taivaal features eight original compositions. The group has labeled itself as "Vocal Folk Hop": there are some folksy harmonies here, but these pieces hop and jump with a modern flair, and there are just as many moments of beautiful dissonance as there are stunning harmonies.

Ei Leijuta ("No Float") is a song about a storm that switches from soothing sighs to sassy, driving melodies to a swirling tempest, with these singers' voices personifying the countless facets of a storm. It's the most powerful song on the album; Venla Ilona Blom has done a stunning job with this composition. Listeners can get a sense of the emotion and meaning of the song just from the pacing and tone of the vocals; turns out the translation of the lyrics in the CD booklet is unnecessary.

There are many beautiful moments on the rest of Tules Maas Vedes Taivaal, but none as gorgeous as that song. The sparse beginning of Kohma is attention-grabbing, and the group uses human breath to gain momentum. Tuu Kerää starts out like the sound of water dripping and ends with a rallying cheerleader yelp, while the soaring lead on Valkia is entrancing.

But there are some choices here that detract from the overall whole. The first song Alku is an extended intro track that goes on a bit too long and is distracting on subsequent album listens. The use of handclaps as percussion on several songs (Loimu, Tuu Kerää) is off-putting with its loudness against the voices and overall processed sound. Odotan is gorgeous throughout but ends with an oddly atonal phrase that doesn't fit with the rest of the song. These choices don't distract from the first listen, but they do cause me to pick and choose songs on successive listens. That impact on repeat listenability is what makes this album a "4" for me — as odd as it may sound, there are songs that I loved hearing but don't want to revisit, and those moments can't stack up next to the beauty of standouts like Ei Leijuta.

Releasing a first full-length album is a daunting prospect for any artist, with or without instrumental support. For an a cappella group from the Scandinavian Peninsula though, the pressure must be especially high. When those who came before you include luminaries like The Real Group, Riltons Vänner, Club for Five, and Rajaton, you might find yourself facing heightened expectations from a cappella pundits all around the world (myself included). It's a lot of pressure — but all-female quartet Tuuletar fulfills all of my expectations, and then some.

"Tuuletar" translates to "Goddess of the Wind", and the album name promises songs "On Fire and Earth, in Water and Air". It's a fitting title for an album that contains songs titled "Frost" or "Flame" (according to the secondary English titles every song is given), and the inspiration the band and especially lyricist Piia Sailynoja draw from the windswept landscapes of Finland is evident throughout the album.

The percussion at the beginning of Kohma ("Frost") sounds like ice cracking, like someone slowly making her way through deep snow on top of a glacier. The joyfully whispered tribal chants introducing Loimu ("Flame") reflect the magical trance of dancing around a fire to stay warm. Ei Leijuta ("No Float") starts with a mysterious overtone-filled intro before breaking into an explosive beat, a sweaty rave in a Helsinki basement while outside the arctic winds are howling.

You can hear the raw elements grinding against each other in the music, and the evocative lyrics, music, and arrangements that all four singers contributed play a large part in that. But due credit must be given to the mixing and producing done by Liquid 5th Productions. Each track is given its space to develop a lush acoustic landscape, which in tracks like Tuu Kerää ("Kick") can all of a sudden shrink to almost claustrophobic intimacy before opening up again. Tuuletar's style is influenced by the haunting harmonies of Finnish vocal music, but also by the explosive all-female beats of The Boxettes and the trip hop vibes of Ommm. There's a wide gap to be straddled in polishing the beats of these songs without losing the inherent connection to nature, and Liquid 5th along with primary arranger Sini Koskelainen realize that vision with great cohesion. There are gorgeously phrased sprawling vocal lines, floating overtones, and energetic chants ranging in volume from barely audible whispers to shouting at the top of the singers' voices, all tied together by Venla Ilona Blom's explosive vocal percussion.

The one criticism I could level against this album would be that it only consists of eight tracks — but these tracks build so perfectly from and into each other, starting with a calmly building storm in Alku ("Beginning") that reminds me of Club for Five's excellent You're the Voice album, and eventually closing in a brief choral outro added to the end of Soua ("Row"), that I can't even fault Tuuletar for this.

Tules Maas Vedes Taivaal is Scandinavian a cappella at its finest, blending traditional harmonies and modern beats in its folk hop textures. It's hard to think of a reason why any a cappella fan should not like this album.