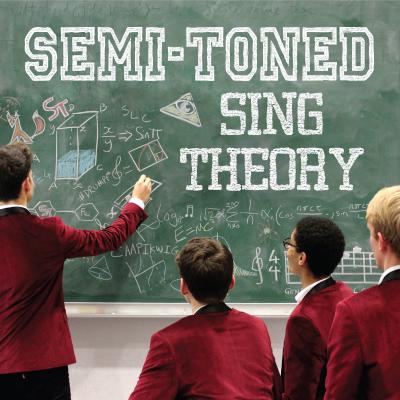 With Sing Theory, the men of Semi-Toned have put together an exciting six-song EP that feels complete enough to be a full album. Though Semi-Toned is a group from Exeter University in Britain, this work sounds more like it's from a professional group than a collegiate one. Semi-Toned is on fire with energy, the soloists rock, the backgrounds lock, the vocal percussion is on point, and the production polishes without overwhelming.

Semi-Toned sets the tone with the bouncy and funky Time and continues to deliver with each new track. While all the arrangements are good, those by Eddie Henley are brilliant. His work on 7/11, Sweet Life, and The Chain put those songs over the top. He keeps the ear interested throughout each song by mixing it up in just the right way. He knows when to be simple, when to be complex, when parts should move, when a solid chord is effective, when silence is strategic, and when the beat should drop.

Samson is the EP's only ballad, placed strategically in the middle of the album. It is a simple and sweet piece and the only one without vocal percussion. It highlights Semi-Toned's sweet blend and flawless intonation, though it is a drastic departure from the rest of the percussion- and bass-heavy tracks.

Sing Theory closes with a whimsical interpretation of Rich Man which mixes an original Broadway sensibility with Gwen Stefani's modern take. It's clear the guys are having fun with it, just as it's clear they had fun making the entirety of Sing Theory.

Sing Theory is an adorable EP with just six rhythmically-driven vocal arrangements to satisfy an a cappella craving. Liquid 5th does a good job capturing the voices of these talented men. I just love the arranging style of each song on this EP. I'm pretty sure it wasn't just about creating harmonies; the apt usage of rhythm and tempo drives each track to its excellence.

My first impression of Time was kind of mixed. I didn't know that using "e" and "a" syllables in one harmonic texture could turn out so cute. Having this track as an opener instantly drew my attention to listening to the more fun, playful character of Semi-Toned. I could never imagine a male group singing this Beyonce song, but I'm surprised at how they slay their interpretation of 7/11. Sweet Life is an enjoyable listen — soloist Adam Carpenter has a vocal character that suits the song. The background vocals drive the rhythm, so even without the vocal percussion it would still sound perfect.

In Samson, the group shows its vulnerable side by singing a choral-style arrangement. Michael Luya's solo performance delivers the desired emotional value of the poetic verses of this Regina Spekter original. The Chain reignites the energetic and playful mood of the EP — the arrangement must have been fun to learn during rehearsals and including this song in the release makes this EP even more diverse. Lastly, Rich Man closes the EP well by reminding me that this talented bunch can be playful, entertaining, and worth any a cappella fan's attention. I love the arrangement's transition that takes us to the original source of Gwen Stefani's hit  — If I Were a Rich Man from Fiddler on the Roof.

On Sing Theory, I'd give all soloists an A- as they do not even have to perform vocal acrobatics to impress the listeners. The fun mood of this EP, the meaty bass, the punchy vp, and the rhythm and syllable choices of the arrangements makes it a worthwhile experience. The only thing I don't like about this release is the number of tracks. Surely less is more, but the group's capability to entertain is so addictive that my craving becomes insatiable. Is this just a sampler of what these guys can do? I'm excited to have more.

On Sing Theory, Semi-Toned demonstrates an immense raw ability in its sound, creativity, and energy. This is an album that feels entirely crafted by music nerds, and that's a good thing — it's at its best when most in touch with this identity. It's all of the rough edges that need to be addressed that keep this album from fully reaching its potential.

Kicking off with Time and 7/11 is a strong choice, as these songs present the group at its highest energy level and demonstrate how well-mixed and creatively-arranged Semi-Toned's album gets. The former demonstrates a method to the chaotic nature of the voices, while the latter is a much smoother experience throughout, which lets it explore a wider range of sound within the song. When Semi-Toned deviates from a standard and traditional collegiate a cappella sound, and instead focuses on making musical moments that are appreciated regardless of genre, that is when the group is at its best.

The main issue I have with this album, however, is that the high intensity found in these two songs never really lets up for most of the album. Right after these two songs would be the perfect time to take a breather, and Sweet Life, in its initial moments, sets itself up as just that. This breather doesn't last long, however, before the song kicks up in intensity incredibly quickly. There's even an added key change that seems to be too much for the group. This would be fine if the next song, Samson, didn't do the exact same thing. The songs, while both fantastic by themselves, feel insecure in context regarding a lowering in volume and smoothing-out.

The Chain is another fantastic song on the album, but I could never get fully into it on my multiple listens. For my first few listens, I couldn't pinpoint exactly why, and it hit me soon after that I was fatigued from the over-prevalent intensity of the album's previous songs. When The Chain comes up — and it's quite intense as well — I started to zone out no matter how hard I tried to stay engaged.

Semi-Toned has a knack for mashing up songs into single cover arrangements so seamlessly that I often can't tell when one song ends and another begins. This is a good thing — creating a brand new product that feels complete in itself, rather than very overtly stitched-together. It also gives room to meld one song's lyrics and style into another's harmonic progression, a concept which Semi-Toned also aces. I should mention at this point, however, that the liner notes for the album are lacking. While they do credit every original performer for every song and mashup, they do not credit the original songwriters, nor do they credit the specific song names for which the performers and writers are responsible.

On a technical level, I love how openly and clearly many of the members of Semi-Toned sing, both background parts and soloists. I must give a shoutout to the basses in particular. Semi-Toned's basses don't feel the need to prove themselves and thus don't really press or stress their voices. They sing with an ease and openness that by itself is enough to create the needed foundation for the group sound. It's this clarity and confidence that also makes Rich Man's bass solo feel well-deserved, rather than shoehorned in.

Speaking of Rich Man, I need to rave about how much I love this song, as it encapsulates everything I like about — and everything I want more from — in this release. As I mentioned, Edward Scott does an exceptional job with the solo. He also arranged it with great dynamic contrast between sections, which allows the song to breathe within its bigger moments. The mashup is downright silly, and Semi-Toned embraces this silliness all the way through.

In general, the high points of Sing Theory are absolutely brilliant. I look forward to hearing more from Semi-Toned in the future, because I'm confident that this group can make these highs appear more consistently, while also giving their work ample space to breathe.