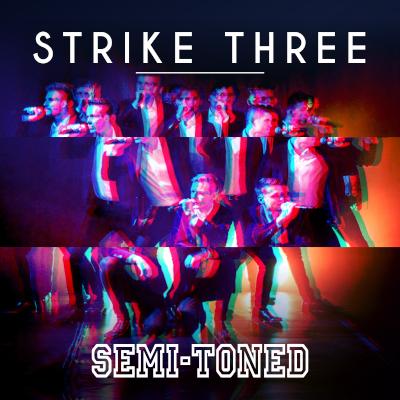 Strike Three is an aptly-titled EP by Semi-Toned, an all-male group from the University of Exeter. Out of the six tracks on this EP, only three manage to hit a home run. However, these singers have mastered the art of chord improvisation and that's a feature that every a cappella group should have.

Let me begin by highlighting the good stuff. Crave starts the EP with fireworks, from its first note to the last chord. The tempo changes, chord substitutions, and vocal riffs are impressively tapestried in this collaborative arrangement by Tommy Hamer and Alfie Davies. Semi-Toned's version is so enjoyable that I don't even miss the soulful feel of the original song by Pharrell. Next, Space Oddity confirms how much of a sucker I am for choral style presentations. The arranger, Jon Smith, is able to create the right amount of embellishments to make a captivating and performance-friendly work. Truly, these guys prove they can melt hearts by just plain singing, no vocal percussion needed. The last track, Bat out of Hell, is such an energy-infused performance that it almost makes me long for more.

While there are some tracks I consider home runs, there are some songs that don't make my hit list. I Wish, Careless Whisper, and Peg (I Got the News) are fillers in the midst of good performances. The thing is, one can't just sing Stevie Wonder's I Wish without committing to exude the bouncing energy that the song requires. Although the soloist/arranger Tommy Hamer is able to pull off a decent front line representation, the background singers just seem to lack the commitment to back it up with some groove. Then, Careless Whisper fails to make something new out of flirtatiously impactful original material — it just doesn't work for me. Singing "never gonna dance again" and "guilty feet have got no rhythm" on a dance tempo is an ironic way of delivering the message of the song. And lastly, the repetitive melody of Peg (I Got the News) is so painful that a one-time experience is enough and another run through is just a matter of personal choice.

Strike Three may be hits and misses as a final product, but this doesn't stop me from being a fan of Semi-Toned. I will still play my favorite tracks on repeat until my ears bleed. Fans will totally love it too, I hope.

Semi-Toned is one of the most fun groups for me to review. While not perfect, Strike Three continues the group's trend of infectious and bubbly energy, though this release is not as polished or consistent as the group's last EP, Sing Theory.

Most of the praises I've given this group in the past still stand. This EP is at its best when Semi-Toned deviates from a traditional a cappella sound and embraces a higher level of musicality. Even when traditional a cappella vocables (vocal syllables) and textures are used, the group performs them well enough to make me not mind. The group has a clear sense of identity in its sound, and is not afraid to sound cute, quirky, and silly when it's needed (such as on Careless Whisper). Textures are smooth and background voices are warm, particularly the basses.

One praise I can't give to the same extent is the seamlessness of song mashups. Both of these interludes —  Crave's She Drives Me Wild and Peg's I Got The News —  feel a bit forced in. They're great song choices for these mashups, but the transitions could've been improved for both.

One area where I consider Strike Three a major step up, however, is the EP's patience. On Sing Theory, songs had a tendency to rush into high points and even end without full realization of their ideas. This is not the case on Strike Three — after a fantastically upbeat opening with Crave and I Wish, Space Oddity is exactly the type of song needed to let the listener relax. Some of the singers may push their voices a bit and don't commit to the tender texture, and the harmonies can get choppy at times, but the song still does exactly what I was hoping it'd do.

Later, Bat out of Hell has a phenomenal buildup to its high points. A high-octane entrance leads the way to a gentle first verse, which gives the rest of the song plenty of room to build and feel satisfying the whole way through. Strike Three uses moments like these to create a strong arc even in the limiting length of an EP.

Soloists have also stepped up their game since the last time. Solo work wasn't at all weak on Sing Theory, but Strike Three's soloists take true ownership of the music more frequently. My favorites are easily Sam Harper's incredible expressiveness on Bat out of Hell, followed by Tommy Hamer's mixed voice and super smooth control on I Wish.

That said, Strike Three is unfortunately not as consistent in energy and lacks the commitment to the planned musicality that Sing Theory had. There are times when the direct transcription type of arranging limits the group's ability to explore more textures or make the songs more their own — Peg (I Got the News) is particularly guilty of this. At times, the cute background falsetto riffs can get tinny and feel half-baked. As I mentioned earlier, Space Oddity suffers from a lack of buy-in to the tender texture, but it's not the only song held back by this type of disagreement. During the most high energy songs, such as Crave, some of the background voices are restraining themselves too much, when they should be matching the soloist's level of engagement.

Despite these issues, this is still one of the most fun a cappella albums I've listened to in a while. Semi-Toned once again demonstrates that it has a sound and identity worth embracing. The best next step is a full commitment to this sound and identity, both on the album level and on a song-by-song basis. Strike Three is quite simply fun, and does everything in its power to remind you that it is exactly that.

Semi-Toned warrants a commendation right off the bat for adapting several songs that don't lend themselves readily to a cappella, and for executing these adaptations with precision and intensity. It's easy for an instrumental solo or riff to sound labored or cheesy when put to voices, but especially with the famous saxophone solo in Careless Whisper and the virtuosic opening to Bat out of Hell, the group exceeds expectations.

The soloists are strong and well-suited to their numbers. The dual soloists Chad St. Louis and Alfie Davies (Crave), and Sam Harper (Bat out of Hell) are standouts from start to finish, not only for excellent vocal quality and style, but for the excitement they bring to their respective numbers, securing a strong beginning and end to the album as a whole.

Semi-Toned excels in the jazzy up-tempo style. Kevin Fox's adaptation of Careless Whisper deserves special recognition for breathing new life into a song so well-known that its sax solo can be used as a punchline. The background vocals are precise, well-blended, and generally interesting to listen to throughout. I'd like to give a shout-out to the bass section for holding down some great lines in every number, but I'll draw attention to I Wish and Space Oddity, and to vocal percussionist Max Weeden for bringing the intensity, especially for Crave and Bat out of Hell.

While most of the songs on the album are exciting and fun to listen to, a few of the middle numbers come across as one-note, especially in terms of vocal intensity, and it affects the group's attention to rhythmic precision. The album's only slower number, Space Oddity, suffers from a slight imprecision in the background vocals, and I Wish loses some of its initial intensity by failing to build towards the middle/end, but I only draw attention to these things because the other songs on the album, especially Crave, Careless Whisper, and Bat out of Hell, are so outstanding in terms of vocal intensity and precision.

I've mentioned the closer, Bat out of Hell, in almost every positive attribute of the album so far, and that is because Semi-Toned really saved the best for last. The rock genre is tricky to adapt for voices because it will naturally lose the edge to the sound provided by the instruments, but the group and soloist make up for this tenfold. I've already sung praises for Sam Harper's solo and the strong opening, but I can't say enough good things about this one. The group knows exactly when to switch tonal quality in the background vocals, and it creates some incredible contrasts that give the song a thrilling progression. Some sections are so beautiful they give me chills, and then the background vocals go right back to the strong, precise, and exciting tone that carries the style.

Semi-Toned would do well to bring some of its stunning intensity to slower and filler numbers, but overall, Strike Three is a fun listen with some incredible standout performances and great moments of innovation.