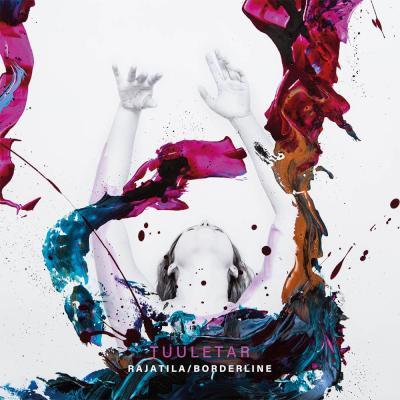 Rhythmic, dissonant, and compellingly melodic, this new album from Tuuletar is the most interesting vocal project I've heard in ages. Finland is no stranger to women's folk (Värttinä) or vocal metal (Fork). The four women of Tuuletar build on that tradition and, in the process, make something that is entirely their own.

The heavy breathing, low chanting, and soaring ululation of Tulen surma sets the stage for what is to come. This track has echoes of throat singing, Middle Eastern celebrations, and German experimental music (like Einstürzende Neubauten). It takes whatever the listener brings to the table and adds a new, holistic layer of song and performance. It's hard to describe something without comparing it to what you've heard before — whatever background you have, Tuuletar will pull from it and augment it in the course of getting its vision across.

One advantage of modern a cappella recording is that so many of the old debates we used to have about purism are now obsolete. No one outside the classical milieu records now in a way that sounds like they would in a live, acoustic venue. As a result, I no longer obsess over an artifical baseline here, a set of overdubs there, or where the looping stops and starts. Rajatila / Borderline has all of those things and more, but I never question its place in the vocal record canon.

Folk music in particular has a lot to gain from crossover projects like this. Adding new beats and new ideas keeps a tradition feeling fresh and alive, while ensuring there's a strong community of expert musicians who are as keenly aware of their roots as they are of the new directions they are pursuing. Nordic folk music is having a vibrant moment now, as modern strings blend with Hardanger fiddles, nyckelharpa, and global beats to find new energy and new audiences.

Finland's own folkloric string instrument, the jouhikko or bowed lyre, makes an appearance here by way of performer and ethnomusicologist Pekko Käppi. On Hälytystila he offers a cello-like obligato that sings alongside the voices, sounding at home. Likewise, the bass lines and dance grooves of Valtaaja also succeed under one of the catchiest choruses of the whole disc. Each song presented here has its own rhythm and its own melodic center, keeping the tracks sounding different even as they unmistakably flow as a whole.

"Rajatila" means borderlands, and the songs assembled here brush up against any number of artistic, geographic and traditional musical boundaries. Tuuletar styles itself "vocal folk hop". That's not the collection of concepts I would have used, but you should get this record and decide for yourself.

What Finland's Tuuletar has created is an artsy, atmospheric soundscape, one that inexorably leans towards the disturbing and theatrical. Mystical forces meet electrical currents. A self-described "vocal folk hop" group, only the vocal part may lead most RARB readers to conjure the group's sound. The folk they're referencing is the timeless, nature-focused Finnish folk tradition, not the James Taylor variety, and the hip hop elements are only those that have penetrated world music generally. But mismatched monikers aside, Rajatila / Borderline is a truly bold ride.

Purists beware: Rajatila / Borderline is vocal-centric, but not always strictly a cappella. Though there's beatboxing, you'll also hear a good deal of non-human percussion, atmospheric effects like water and thunder, and even a bowed lyre, accordian, and flute. And while the lead voices are treated sparsely by mixer Oona Kapari (a nice contrast to 2016's Tules Maas Vedes Taivaal), the deeper-placed backgrounds range from natural to extremely electronically enhanced. Think Nordic a cappella plus theatrical sound design.

Despite this award-winning group's obvious skills, precision isn't the real focus here; raw, dramatic expression takes center stage at almost all moments. One moment in whispers, the next in shouts and screams punctuated with tension-filled harmonies and anxious beats, the world of Tuuletar seems dangerous and otherworldly. It's no wonder the group's music helped create the soundtrack to Game of Thrones.

Strikingly original and emotionally impactful, Tuuletar deserves our undivided attention. But for all its virtues, Rajatila / Borderline will leave a good many listeners feeling adrift as they consciously or unconsciously seek something familiar and come up empty-handed. Form, harmony, texture, lyric, melody, and tone color are all departures from the norm. That's part of what makes Rajatila / Borderline such a powerful listen. But it's also what sometimes keeps it at arm's length. Only the truly open-minded listener is likely to find comfort here. But I suspect that may be exactly what Tuuletar intended. These singers know their adventure isn't for the timid.

In all my years of listening to a cappella music, I don't think I've ever come across an album like this. Tuuletar is a folk quartet out of Finland. The group describes Rajatila / Borderline as an "extensive artistic work that lingers and wanders along the border of life and death". One of the challenges of music from other countries and in other languages is that we as listeners might not be able to understand the story being told without understanding the language. As Tuuletar demonstrates throughout this album, language is irrelevant when presented this effectively.

If it wasn't clear that this album is going to be an experience, just start from the top. Tulen surma is incredible. This track feels entirely unmetered, and cacophonous, but stylistically flawless. The sound is exactly what one would expect when hearing phrases that translate to imply a demonic rising. It's haunting and absolutely gorgeous. I cannot understate how amazing the conflicting patterns and phrases are. If standing in a crowd, it's possible for the human brain to simply ignore the white noise of others around it and focus on one source of sound. This number refuses to let the listener process one line; everything is conflicting and forces the listener to process each line at the same time. The resulting effect is haunting and mesmerizing.

When Tuuletar instead ventures into more metered work, Aika tappa is a great piece to examine. While there are still complicated rhythmic elements, this piece uses simple chords over a driving beat to highlight the intention of the song. The soloist's anguished pleading translates flawlessly. There are pained screams in the background of the final chorus and the raspy pseudo-screaming in the soloist's final phrases are an amazing added touch. This piece fully encapsulates the emotions of the piece, and fully tells the story in a way that is truly unique.

As someone who spends the vast majority of his time listening to American popular music, I find myself somewhat disliking the presence of the only piece that most closely resembles that sound. Valtaaja (Remix) is a very well-done misstep. That statement contains an oxymoron, but the track is just in the wrong place on this album. This album is rooted in the folk style and there is an amazing story arc throughout that is present regardless of if the listener understands the language or not. So, when a track steps in that is presented over a very driving club-style beat, it's distracting from the intention of the group. While I can appreciate the presentation and state that there's nothing inherently wrong with the track, it might have been better presented as a bonus track or perhaps be independent of the album and its story entirely. Removing the track might have strengthened the overall presentation of the album.

When all is said and done, I am still amazed by Rajatila / Borderline. It is so incredibly unique. It is not an album to listen to in the background while working or driving. This is an album to sit and listen to. It's a phenomenal display of musicianship that I have never heard before. Take a listen to this work — genuinely take this album, sit in a chair for an hour, and simply listen. It's worth every second.