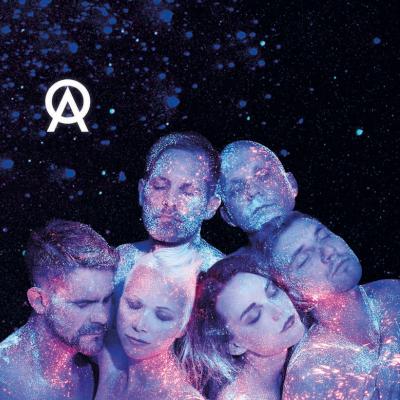 ONAIR took the a cappella world by storm with commanding appearances at AAVF in Aarhus, Denmark; "Vokal.Total" in Graz, Austria; and SingStrong in Chicago, IL, USA. ONAIR's performances are undeniably powerful and emotionally moving with a bevy of awards as proof. But translating that raw, infectious energy to the recording studio can present a daunting challenge. With Illuminate, ONAIR meets that challenge head-on with a fair amount of success — but the result, as strong as it is, falls just short of the wonderful experience of catching the group live.

Illuminate, the title track, is unfortunately the album's weakest. The performance feels so sweet and mellow that its authenticity is a bit suspect. Though the end has a strong build, it doesn't save the day. Fans may recall ONAIR's daring and bold Wolf and I. Performances like that mark a group and cement its reputation. Here they also guide expectations for an album's intensity. Thankfully, Sonne brings an aggressive energy and artful grace to the forefront. Track one is forgotten, and the "real" ONAIR, daring and inventive, seems poised to dominate the rest of the album.

But then Stairway To Heaven throws a curveball. The beginning of this classic is intentionally sung with very loose intonation. The artistic goal is to reveal the singer's character, to set the scene. After all, these singers can sing impeccably. But nonetheless this choice doesn't evoke the intended reaction; at least some musically inclined listeners may even grimace at the intonation choice. The track is also weighed by an electric guitar solo that's good, but not quite at the group's normal high standards. Still, ONAIR finds many spots in the song to joyfully rock out.

Der Weg is a German ballad that is simple and beautiful. The arranging and singing is truly excellent, and the emotional journey is genuinely touching. It's the track with the least production bells and whistles, and it may be the album's most successful.

The Pretender is haunting, especially at the outset, and the performance moves dramatically between whisper and shout.

The closer, Illuminated, delivers a deeply satisfying anthemic strength. By the time you reach it, ONAIR's LP feels too short. And that perhaps is the mark of a group with undeniable excellence; even on an inconsistent release, greatness shines though. I remain a fan and can't wait for the group's next release.

ONAIR's debut release, Moon, is one of my favorite a cappella albums of all time, so clearly Illuminate had a lot to live up to for me. And it delivered!

In case you missed RARB's previous review, ONAIR is a six-member mixed group from Germany. The group's typical sound is pop a cappella, with strong bass and vocal percussion, either a female or male on the lead, and the other parts filling in the background. The group's arrangements on Moon are very interesting, and the ones on Illuminate continue the trend. Although their "home" sound is pop, they certainly do excursions ... into folk, rock, metal, you name it. Sometimes all in one song! Like Sonne: a Rammstein song which the group has made its own by cycling through various musical styles (including children's, heavy metal, and a fugal section), and then adding interesting chords where Rammstein often just had spoken parts. It's actually kind of bizarre, and a little disconcerting, but well worth a "5" rating even though I had to listen to it several times before I really felt like I "got" the piece.

One shortcoming of the album is the liner notes. Namely, they are non-existent. The CD packaging gives the track list, singers, and production credits — but that's all. As a result, I wasn't able to look up any information about the title track, Illuminate. I was also unable to Google it, so I suspect the song was written by group members themselves. It's a nice pop anthem with a female soloist, perhaps a bit repetitive but otherwise very fun.

Stairway To Heaven is a great cover of the classic Led Zeppelin song that again employs a female soloist. She begins with a kind of old-fashioned audio filter. The filter drops off around the 1:20 mark, and the song becomes more modern. Almost a pop feel for the next minute, before morphing into full-blown rock. A minute later there's an "instrumental" section with an awesome distorted electric guitar solo. Probably my favorite moment of the song, and one of the best spots on the entire album.

With such a variety of styles, it would be easy for Illuminate to feel disjointed. However, the even hand of master mixer Bill Hare shines through, with perfect balance, perfect blend, and a consistent elegance that persists throughout the changing musical styles to unify the album. It really makes the album a joy to listen to straight through from beginning to end.

And Bill Hare's work is never more impressive than on The Pretender, my favorite song on the album. It's a cover of a Foo Fighters song, somehow matching or maybe exceeding the intensity of the original but without the harshness of the original. The repeated chorus approaches shouting volumes, but never loses a musical feel: "What if I say I'm not like the others? What if I say I'm not just another one of your plays? You're the pretender! What if I say I will never surrender?" Wow! I think I played the track three times back-to-back-to-back the first time I listened to it, just in awe of the experience.

The album concludes with Illuminated, which is also very full, with a wall of sound feeling in places. It's a cover of a "synthpop" British group, Hurts, and is an appropriate bookend to the title track Illuminate. It's almost as if the initial track is a command to their own music to illuminate the listener, and the final one is a statement of the listener's final condition after having survived the journey. And this is one 25-minute journey you will not regret making. Kudos to the group, and to all involved in the making of the album.

With Illuminate, ONAIR is moving on from the group's first two EPs. This is most immediately apparent in the cover art: on the first two albums, the band logo was monolithically displayed over a cloudy background; here the logo is tucked into a corner with the band taking center stage. Naked, nestled up against one another and sprinkled in UV paint, the group heralds an album that feels much more intimate than its predecessors.

The album opens with the title track and sole original; ONAIR appears to be shifting away from covers, and this song indicates where the group will go. It's a catchy pop tune, masterfully arranged as we have come to expect from Stefan Flügel. Over a bubbly groove, the lead and backing arrangement sparkle and light up just like the UV paint on the faces of the singers on the cover.

Although the remainder of the songs are covers, the treatments are as unique, appropriate, creative and occasionally surprising as one would expect from ONAIR. Sure, Sonne still has some distorted guitar and menacingly whispered lyrics — it's still a Rammstein song. But there are quiet moments full of suspense, tender harmonies, and even a fugue-like section (which the other well-known Rammstein cover by a German group, Maybebop's Engel, also had ... coincidence?). The other German song, Der Weg, will be unknown to most people outside of Germany; here, though, it was a major hit, written by Herbert Grönemeyer after his wife passed away. While the original never strays too far from bordering on cheesy, the cover feels much more intimate, evoking many different nuances of grief and reminiscing. This is what elevates ONAIR above other groups — both in the group's arranging and performance, the singers manage to condense the songs down to their emotional core message.

The Pretender and Stairway To Heaven are rock classics, and daunting choices for any group to take on due to their notoriety. ONAIR is mostly up for the task, though. There is a great amount of restraint and tension among the calm intro of The Pretender, before the piece unleashes, more slowly than the original but with no less intense emotion behind it. Stairway To Heaven is perhaps the weakest piece on this album; the arrangement seems slightly intimidated by the famous original and the guitar solo is a bit too artificial. It's still an extremely solid cover, but it doesn't stand as tall as the rest.

ONAIR continue to impress with its emotionally concise and intense performances, but the singers feel much more personal on this release. Even though a cappella purists might turn up their noses at the amount of studio effects used in the production of Illuminate, it's very hard to justify giving this one a miss.

This album is available on iTunes and the group's online store.