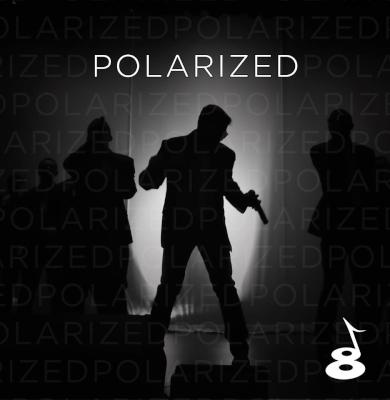 The interest in covering the latest popular music and the issues — some might say challenges, some might say obstacles — inherent in translating that music into a cappella have been around for several decades now. As pop music itself becomes more and more "assembled" rather than "performed", those issues only become more pronounced. That's especially the case when the repertoire is predominantly hip-hop/club-oriented R&B, and that's precisely the hurdle that Eight Beat Measure was facing with its new album, Polarized.

The good news is that for the most part, as a finished product, Polarized generally succeeds. To call this album "slick" is perhaps an understatement and it's also not meant as a negative. Indeed, the swagger of the men of Eight Beat Measure comes blaring through on quite a few of the songs rendered here — in keeping with the testosterone-fueled material they often choose to cover — and the production serves them well in replicating (almost too faithfully at times) the inhuman vp and various guitar and synth effects that are native to the source material. As an "assembly", it's terrifically done, sounds fantastic, and in some cases, could almost substitute for the original if you had a hankering to listen to some of these songs.

Unlike some past albums I've reviewed, that's — thankfully — not to say that there is little craft also demonstrated here amongst the arrangers and singers as well. It's the extent to which that craft and creativity comes through that defined my enjoyment of each selection, even as many of them earned the same top score, since at the end of the day, their quality as recorded a cappella is hard to contest.

At the high end, there is Hold On, We're Going Home, which takes a somewhat plain, limited, and not especially melodically interesting original and expands on it with all sorts of harmonic choices that broaden and deepen the material. Songs like Fascinated and Talk Dirty are a bit less successful as they rely so heavily on the pounding bass/vp effects that the rest of the backs almost become unessential ornamentation. It's laudable that a conscious effort is made to keep most of these heavily manipulated arrangements sounding "vocal" and not just automated, but so overwhelming are the machine-generated elements at times that it's hard not to take notice (and to wonder if Eight Beat's live set incorporates much of this same "trickery"). It's also telling that on Brand New Jones — what might be called a purer arrangement, at least on this album — the results are good, but not exceptional. Without the crutch of sampled and sequenced vp, the performance falls a bit short in the groove department and the arrangement misses an opportunity to build a funk texture more naturalistically with a more layered, densely rhythmic and harmonic background.

Also to its credit, the group isn't afraid to take a few chances and do some reinterpretation here and there. The tweaked/customized raps do get a little repetitive (showing up in at least four songs) but towards the end of the album, the group's choices on All of Me and Uptown Funk demonstrate that the singers are not so slavishly devoted to the originals that they can't mix things up a bit. For me, the former, which gets a bit too much boy band-esque treatment here, is less successful as it obscures the plaintive earnestness that is the emotional center of the song. The slowed-down Uptown Funk is both surprising and effective, in particular when it comes on the heels of numerous other songs with similar grooves. It's refreshing that the group chose not to make this one business as usual.

I'd be remiss if I ended without noting that at least in the version I received, the CD comes devoid of almost any credits whatsoever — which feels both unjust and irresponsible (and possibly illegal, though that is not my area of expertise). These guys do a lot of wonderful work here and both they — as individual arrangers, soloists, percussionists — and the team that handled the aforementioned "assembly", and certainly the original writers and artists, deserve the recognition (it would also help buyers know that the Jealous offered here is not in fact the Nick Jonas song). If this were work of far lesser quality, I might understand hoping to preserve anonymity. But even with my quibbles, this is quite excellent work, and the guys owe it to all concerned to make sure everyone gets noticed.

These boys are the real deal!

If you're not familiar with the work of RIT's Eight Beat Measure, it's time to introduce yourself. These guys are the future of a cappella. And Polarized has everything to do with it. In the span of eleven songs, Eight Beat Measure delivers the most polished and in-your-face album that I've heard all year. And if you're still in your seats by the end, you may need to get your hearing checked.

Polarized opens with a small sample of Bound 2. Although the track is 37 seconds, its reminiscent feel of early 2000s RnB is smooth and lets you know you're in for something good.

Each subsequent track is heavy on having a pulse and riding it 'til it's time for the club to close. Fascinated starts with plenty of production effects and a confident rapper. Songs like this can get a tad repetitive, but moments of big group harmonies and small pauses before re-engaging are what make the experience great.

The group then transitions into a cover of Drake's Hold On, We're Going Home. From the runs in the backing parts to the bare moments of bass, percussion, and solo, the song is effective, and has everything that good, modern songs should deliver. And the group's cover of Talk Dirty is literally on-par with the original. The backing music is just that good!

The contrasting rhythms and massive buildups in Scream are two reasons we should be labeling Eight Beat Measure as one of the most innovative and creative groups currently in the aca-scene.

The group makes a slight detour in the production style with Brand New Jones. The track is equally good as anything that precedes and follows it, but the focus is on the soul of the song, which gives the vocals a unique sound and keeps the momentum moving forward.

There are few college groups who are putting out stylish songs like Boogie Nights. The 70s-esque song has life in every aspect of it. Jealous keeps with a similar electro-funk vibe that's big on harmonies and shows how good the group is at completely filling a vocal space.

All of Me is a blueprint on how to remix an extremely popular song into something of your own. The song is powerful even in the softer spots. Uptown Funk is also on the same level and is the most imaginative cover of this song around.

The group concludes with a smash hit in She Came to Give It to You, weaving elements from previous tracks to outfit this rhythm-heavy, fast-paced, incredible dance track.

There's hardly anything to remark negatively about when looking at Polarized. For those looking for a break in the excitement level of these high-octane tracks, look elsewhere. This is exactly what a cappella needs to compete with anything mainstream. And I'll just say, I'd be willing to bet on Eight Beat Measure every time if the group's music remains this good in the coming years.

For the most part, that vanilla pop radio style is found on the first half of the album. At worst, Eight Beat Measure tries too hard to imitate the original performers, and ends up creating a pressed and tense sound in their voices without exploring their own instruments enough. Scream is a good example of this, where the soloist sounds like he's constantly trying to catch up to his own breath support on the verses. Talk Dirty is probably the best track amongst this group of songs on the album — it doesn't really go beyond the original song, but it's too clean to not still enjoy.

The second half of the album is mostly populated by the disco and funk styles. Even in the more contemporary songs on this side, the group cleverly employs sounds and vocal instrumentation that fits those styles. All of Me, however, should not have been placed right in the middle of these songs. It feels lackluster in focus and emotional effect, and it breaks up the rest of that very consistent and enjoyable vibe.

For the most part, Eight Beat Measure understands the groove required for disco and funk. Well, for the most part — the basses need some refinement. The best way to sing bass is to sing the low notes as you would any other part of your range. Trying too hard to sound "bassy" doesn't help anyone, especially in these genres.

My score for She Came to Give It to You is a little deceptive — it's one of my favorite songs on this release, but it was a poor way of ending the album. It just doesn't feel conclusive — other songs on the album would have done better to be selected as the finale.

I have to give a shout-out to The Vocal Company for the production work on Polarized. I'm pretty ambivalent about heavy mixing in a cappella, but the producers definitely make good use of it on this album. Songs such as Fascinated, Boogie Nights, and Jealous would be nowhere near as good if not for the heavy effects used.

The liner notes, by the way, are upsetting. There are song titles ... and that's about it. No songwriters, arrangers, soloists, original performers — nothing. It's disrespectful to the writers, to the arrangers and soloists of your own group, and also to the consumers and reviewers who have to search for segments of lyrics because they can't find the original song online just by a song title.

Despite this annoyance, Polarized is an enjoyable album that is at its weakest when it plays it safe, and at its best when it takes its biggest risks.

This album is also available on Google Play and Spotify.