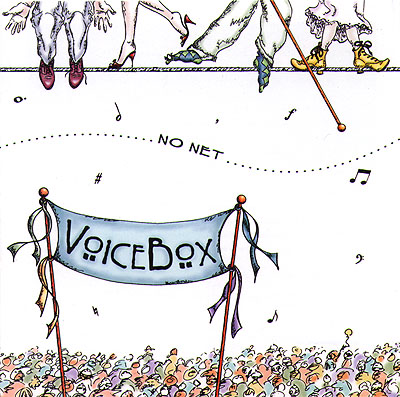 If RARB were tasked with naming albums instead of merely reviewing them, I'd call the new VoiceBox album "Meditations on the Four". All of its songs are Good, but some are better than others. And regardless of its inherent merit, whether you will like it or not depends entirely on your personal aesthetic.

Strong, clear, mature voices are the album's hallmark. Like hotel piano-jazz singers. The average VoiceBox singer is a little too pure to be classical, way too white to be pop, let alone soul, and a little too much vibrato to sing straight jazz. The background singing is typically tight and well-blended, as that vibrato apparently comes with a fair measure of control. But that makes sense too, because all of these voices sound well-directed from within and without.

Some of the biggest successes on the album exploit the potential purity and rich tone that these singers are capable of. They do a lovely rendition of Sinead O'Connor's In This Heart, and the album's closer Good Night is quite beautiful. I liked Dixie Storms also, although I think the VoiceBox strengths lend themselves more to ensemble singing than the solo-and-background format. Witness the jazz standards Over the Rainbow and Skylark, the latter with a perfectly cast soprano solo, pure and rich in all the best ways.

The medieval patter song Fowles in the Frith is a terrific track, the most original-sounding cut on the disk. Another surprising success is the vampy Pink Cadillac/Greased Lightning medley. It's bouncy, jaunty and cute in its over-the-top quality, and goes together very well. I could have done entirely without the I Get Around interlude, however — another example of "a good idea taken too far" for the a cappella archives.

From this album, I think I would enjoy the VoiceBox live show. I am drawn to the pure and beautiful quality of all of their voices. And I bet they have a downright dreamy quality in person. They remind me of a slightly poppier, slightly less pristine version of the Western Wind Vocal Ensemble.

But to buy the album without that personal connection? Only if you are the sort of person who likes Lynne Jackson and Mike Palter duets, or perhaps Diana Krall. Or if you look beyond groove to the voices within.

VoiceBox does a great job of putting together clean harmonies, rhythmic sophistication, and crisp production on their second album, No Net. Their eight singers are mature, capable, and study hard at their craft. Their intonation and blend are quite good. Even the liner notes are well designed and informative. In fact, I liked the album. So with all that going for them, why did I not give VoiceBox a higher rating?

The actual listening experience of No Net leaves much to be desired. There is a long stretch down the middle of the album where all the songs just kind of mesh together in terms of arrangement style (languid and mellifluous), tempo (slow), and interpretation (choir! choir! choir!). As a matter of fact, it is somewhat strange to me that VoiceBox's sound is so choir-like, since there is only eight of them. Hrm. Well, it may be a testament to their ability to blend and tune together that they would sound so much like a bigger ensemble.

Another of VoiceBox's choir-esque attributes is their soloists' consistent use of head voice to sing their leads. Even when the notes are low enough for some power belting, VoiceBox soloists continue to sing in head voice, which definitely lends to the show choir sound.

I was disappointed that the arrangements seldom fleshed out into really challenging chords; VoiceBox is not afraid to sing in unison or near-unison quite often. While I realize that singing well in unison is a marvelous feat in itself (you laugh! it's true!), I find myself wishing that these capable singers would stretch their wings a bit and tackle something more complex.

In any case, VoiceBox has left me with a favorable opinion on their talent — unfortunately the lackluster conglomeration of their performance, arrangements, and soloists makes No Net a record that doesn't make a similarly positive impression.

While listening to this album I got the strange feeling that I'm not really part of the demographic that it would be aimed at. However, I was still able to appreciate what they were trying to do and enjoyed reviewing it.

From what I can gather, VoiceBox is a group of seasoned jazz singers with perfectly tuned ears. There were no pitch problems at all which was very impressive considering some of the close harmonies that are on this album. I also have never heard a group of voices blend so beautifully with each other. Not one voice sticks out and the control over the dynamics was terrific. Musicality-wise, this album is solid.

There is also an eclectic selection of songs to listen to. They perform everything from classical selections (You Are The New Day) to modern pop tunes (Don't Stop). While the classical and jazz songs are their stronger ones, I applaud them for their diversity. I also have to add here that Guinnevere is absolutely gorgeous. It's almost worth getting this album for just that song.

The problems that come with this album are the attempts at the more contemporary songs (Don't Stop, Pink Cadillac/Greased Lightning). There was something that just didn't sound right with these. They were slowed down and given a kind of swing feel that really didn't belong there. It was kind of like if your local barbershop quartet attempted to sing something by Nirvana. It just wouldn't sound right. I also didn't understand the little fugue section in the middle of Moondance. It was another section that just didn't seem to fit.

Overall, this is an excellent album. Even though this is not an album that I would normally listen to, I'm glad I did. Sometimes you get caught up in one type of music and forget about the rest. Albums like this are great examples to remind you that there are other genres out there that are well worth listening to.

The booklet for VoiceBox, No Net, is like an infomercial. Many wonderful claims are made, but the actual product does not deliver. Through "a capella" (Is that how it is spelled in Ohio?), VoiceBox has been freed from the constraint instruments place on style. They are "eight singers — one voice", and their current album, No Net, focuses "on the pop side" of their repertoire. And now, for a short time only, you will also receive a fabulous Sushi Maker absolutely free!

What No Net does do, however, is show that voices are constrained by style. There are those out there who can alter their voice to fit different musical genres with ease. Then there are the members of VoiceBox. In the four upbeat songs on this album, especially Don't Stop, the soloists sounded like a church choir in an all-white neighborhood, while clashing female vibratos belied the claim of "eight singers — one voice".

There are some interesting sections in the arrangements, but any time a certain level of complexity is reached, the sloppiness of execution eliminates any appreciation for the moment. This is most obvious in the 13th century folksong, Fowles in the Frith, the only song on this album I could not listen to all the way through.

As far as pitch and blend go, VoiceBox has more success with slow ballads, and there are twelve of them on this album-which can be viewed as a good or a bad thing. An imprecise sense of pitch in several soloists unfortunately diminished the quality of a lot of those songs.

One major thing I noted was the lack of percussion. There were snaps on a few songs; several hand-held percussion instruments on the Zulu folksong, Babethandaza, and some vocal choo choo train sounds on Riding the Rails. The sound of a rainstorm was the intro to Dixie Storms, and was scattered throughout. For future VoiceBox endeavors, I think a little VP would go a long way.

The next album could improve by leaps and bounds by eliminating vibrato in background singing and refusing to allow pitch mistakes in soloists. Let them record it ten times if that is what it takes to get it right!

I just realized I forgot to address the claim to a focus on pop. I have decided that my generation would find No Pop in No Net, but take a look at the track list and decide for yourself. This isn't a bad album, but I wouldn't recommend that you spend any money on it. Of course if you have seen VoiceBox live or have a personal connection to the group, by all means support them by buying this.

No Net is a perfectly named CD. VoiceBox fearlessly attacks an impossibly broad range of genres on their second release, stretching beyond their strengths on the outer reaches of the repertoire. Maybe there are groups out there that can soar on 12th-century folk songs and then kick butt on Bruce Springsteen covers. I haven't found them yet.

These eight mellow, mature voices shine on relaxed songs that resonate with their classic pre-VP a cappella style. My Romance is basic and lovely. Dixie Storms and In This Heart are equally effective. These songs show off the terrific pipes that are the group's greatest asset. The first soprano floats gently above the chords without ever becoming shrill. The basses have great volume and roundness to their sound. All these lovely voices come together into a blend that's remarkable in a mixed group.

So why press beyond that zone of excellence into rock covers so bouncily precise they're robbed of their soul? Why saddle excellent singers with solos (She's Not There and Ridin' the Rails) well outside their stylistic range?

No Net's production style is just as net-free as the repertoire; the recording straightforward and literal, so each voice is mercilessly exposed. That's a great way of preserving pure vocal music like this, but even the tiniest tuning errors (Fowles in the Frith, etc.) have nowhere to hide.

Some song choices are questionable not for their diversity, but for their familiarity. VoiceBox takes pride in performing songs regardless of genre, but how about retiring the genre of painfully overdone a cappella covers? Some of the oldest workhorses of a cappella get one more trot around the ring on No Net. Great songs they may be, but renditions of You Are the New Day, Somewhere Over the Rainbow, Moondance, and That Lonesome Road have to be pretty creative to add anything new to the canon of music already recorded. These tracks are done well, but are unlikely to bring much to your collection.

VoiceBox's come-one-come-all philosophy does a bit of a disservice to its terrific personnel. I'd love to see VoiceBox pick a theme for its next album and push the envelope in terms of perfection instead of inclusion. Few of us are Stevie Nicks and Van Morrison all rolled into one, and there's no reason we ought to be.

No Net can be purchased through the VoiceBox website.