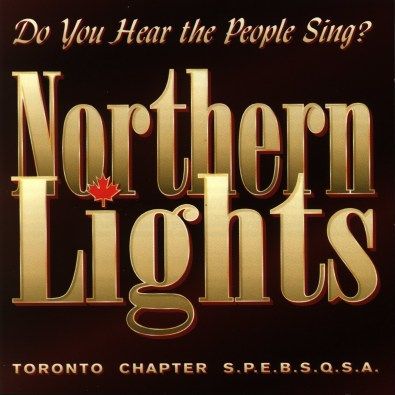 I like the sound generated by this group — a robust but unboastful masculine tone that never seems to strain in filling the church where the album was recorded. The size of the group makes "that barbershop ring" difficult to achieve, although the harmony is tight — what the music lacks in ring is more than made up for for this reviewer by the equivalent lack of schmaltz to the tone. Rich deep basses and clear high tenors work together around a nice warm middle. I do like the sound.

Now, about the song selection. The first nine songs are barbershop, and done with aplomb (if, as said, sometimes without ring/schmaltz; you pays your money and you takes your choice). The guys walk smoothly from bright and cheerful to darker and more melancholy, crossing at the same time from sudden volume to a lovely lush softness. So far so good.

The problems start with the second half of the album. Better put: the problem is that the SECOND HALF OF THE ALBUM is Les Miserables a la SPEBSQSA. Wrapping so many all-male voices around that musical (including instrumental accompaniment) is quite an achievement, and is in its own way impressive the first time through, but for this reviewer at least there can be no second time. A countertenoric Castle on a Cloud? Unmatched vowels on the solo-driven Bring Him Home? Technically well done, but emotionally it gives me the willies.

So, again, you pays your money and you takes you choice. If nine barbershop pieces and a run-through of Les Mis is enough, do go ahead and give this album a chance — the sound is good and the music well done. But if you, like me, think that Les Mis is best done only one way (in French, on paper, preferably with cloth binding), get this album anyway, and have a good time with the first half.

There really is something preferable about an all-male ensemble. I know that a couple years ago there was quite an in-depth analysis of the alleged popularity of all-male a cappella groups over mixed or female groups, and recall that it ended up getting quite technical (the physics, you know, had everything to do with it). Well, I'm no rocket scientist myself, but Northern Lights does a remarkable job of creating an enjoyable album of classic jazz numbers, barbershop standards, and a notable Les Miserables adaptation.

As a large-ish ensemble performing in the barbershop style, Northern Lights may not be the crispest or cleanest sounding group, but their music is still very listenable and fun. Their liner notes include either notes about each song's background or an anecdote concerning the choir's choice to perform the piece. I would have liked to hear the group perform some more complex arrangements in the regular portion of the album (the second half of the album can be called something of a concept-album-within-an-album). I mean, I know that it's barbershop (my liking of the genre is documented in RARB), but how many times can a major dominant seventh be used in a single song? In addition, I feel like the production of the CD could have been smoother; there are sound quality differences in the recording of different songs, some tracks could have used more reverb, while others less. There also seems to be some mastering issues (volume EQ between songs).

Not being familiar with Les Miserables (hard to believe, isn't it?), I can't say how the Northern Lights' adaptation compares to the Broadway classic. However, I think that the dedication and determination that this group displays in pursuing a serious and honest interpretation of the musical is applaudable. They have pieced together the musical highlights of the show with a spoken narration and intertwined melodies, creating a thoroughly impressive medley.

While a fan of barbershop would probably enjoy Northern Lights' album, I'll probably only be listening to the last ten tracks in my CD player.

It was the best of times; it was the worst of times. I like to call this review A Tale of Two CDs. You really have to look at this disc as two separate entities.

Let's begin with the first half. The first nine selections are a nice collection of a barbershop chorus at its best. Each song has that happy, innocent feel that barbershop is built on. The chords ring with dissonance that beautifully resolve and send shivers up the spine. You can't be in a bad mood after listening to these tracks. Each one can put a smile on anyone's face. The only problem that I had was that some of the parts seemed to be covered up. This is because of the different voices all blending together to create music. Barbershop is best performed with a quartet because each voice can shine on it's own. When dealing with many voices, some parts tend to cover up the others leaving a large, but muddy, sound. For example, on Lonesome, That's All I lost the tenor part. I understand that the lead is the most important part, but I like to hear all the other voices as well. I was quite pleased with the first half of this disc, despite this minor criticism.

The second half is a barbershop chorus version of the Broadway musical, Les Miserables. While I commend them for trying something new, and putting their necks out, I didn't enjoy the end product. First of all, they tried to squeeze too much in too little a place. Anyone that has seen this musical knows that it goes on forever. When you try to make a 20 minute summary of it, you're bound to miss something. Les Mis also doesn't really come across as the type of subject matter that would fit in well with the barbershop style. I'd consider Les Mis to be dark, barbershop to be light. When mixed together, you get sort of a greyish thing that becomes boring. A perfect example is in Master of the House. The whole song leads to the last line where the inn keeper's wife tells him where to raise his glass. (If you don't know the play, try to think of something that rhymes with glass.) Because of the clean cut barbershop image, someone decided to change the words. It's like telling a joke without the punchline. While I was disappointed with this section in general, there were some bright spots. The beginning to Castle on a Cloud was chilling, while On My Own was arranged beautifully. Instead of doing an entire summary of the show, they might have been better off picking a couple songs and treating them as individual pieces.

While I would recommend this album to serious barbershop fans looking for something different, I don't believe it is for everyone. Kudos for the attempt, but it didn't work for me.

There's a lot to like about Toronto Northern Lights' first album, Do You Hear the People Sing?. Featuring outstanding liner notes (good liner notes are rarer than they should be) and an elegant design, the CD is a listening pleasure — the accomplished chorus of 41 men sing with an even blend devoid of the more nasal pushing sound typical of a lot of barbershop.

Even those who "don't like barbershop" may be won over by such tracks as South Rampart Street Parade, an upbeat, catchy standard, as well as the album's only live track, a haunting rendition of Day is Done.

What really makes this album noteworthy is the last 10 tracks, more than half the album, given over to what can best be described as a Barbershop Epic — a greatest-hits, oratorio-style staging of Les Miserables, with narration to boot. I was skeptical, but it actually works — the men sing in a beautiful blended falsetto in Castle on a Cloud and Bring Him Home, and handle the rest with sensitivity and gusto.

Do You Hear the People Sing is an album worthy of any barbershop collection worth its salt, and non-barbershop men's choruses should definitely look to it as a model for a clean and unobtrusive barbershop sound.

When I joined RARB, I had one concern. What would I do if I were assigned to review an album in a genre I don't listen to much, like, say, a barbershop album? How would I score it on, say, innovation/creativity, when I'd heard so few barbershop recordings to compare it to?

Problem solved. It may be the only barbershop album I own, but I'm prepared to say that Do You Hear the People Sing? is pretty darn innovative. I'm going to go out on a limb here and say that this is probably the only album on the market featuring a condensed version of Les Miserables sung by 41 enthusiastic Canadian amateur barbershoppers, complete with ponderous narration of the plot. You just haven't lived until you've heard Castle on a Cloud rendered by a large chorus of middle-aged men. This, my friends, is a new idea. As for whether it's a good one...all I can say is that Scott McCarthy just wasn't born to play Cosette. Only the agonizingly familiar version of The Longest Time cost the album its 5 for creativity.

The Northern Lights are a capable choir. They sound well-directed, and they sing with feeling, despite sometimes leaden basses. There is solid musicianship evident on songs like South Rampart Street Parade. But what I see as the up side of barbershop — namely the precision and intimacy of the harmony — evaporates with ten on a part. You've heard this sound if you've ever gone to see one of those old-boy Ivy League a cappella groups and stuck around for the alumni song.

The recording sounds almost like a bootleg from a venue with good reverb. The live sound works well on sentimental songs, especially my favorite track, When You and I Were Young, Maggie. Unfortunately, this technique also means they couldn't fix the little tuning glitches on Bring Him Home and the title track, or perfect the balance between parts, which varies widely from phrase to phrase. My blend expectations are very high with this many voices, but individuals sometimes stick out, and the upper and lower voices disagree about how much to round their vowels.

By this time, you know whether you want to stick your head under a pillow or rush out to order the CD. As for which of those categories I fall into, well, this one won't spend much time in my stereo. Except for John Mallett, most of the soloists have that Kermit the Frog quality, and the whole thing is corny as Kansas in August. But I can't help liking these guys in spite of it all. They have such honest, gee-whiz affection for what they do. Kick some butt in Kansas City, guys. I'm rooting for you.

To order, print the order form on their web page, fill it in and mail it to the group.