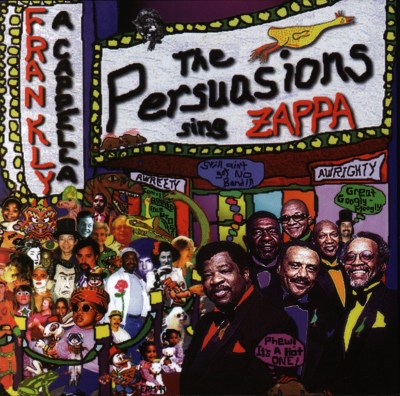 Frank Zappa as sung by the Persuasions. It's a truly bizarre concept. But it's bloody f@!in' brilliant. Frankly A Cappella does more than honor the memory of a great American composer (who just happened to sign the Persuasions to their first recording contract). This CD breathes new life into an art form many believed had seen its day. And who better to do it than the Persuasions?

The Persuasions are the quintessential embodiment of the street corner sound: raspy soulful leads, simple back-ups, a bottomless bass and all the energy in the world. But doo-wop music, as a genre, is lyrically empty; the simplicity and popularity of the songs breeds an over-familiarity. And familiarity breeds contempt -particularly of the drippingly sweet sentimental cliches. Ah my jaded little boys and girls, Frank Zappa is the cure for what ails you. Zappa and the Persuasions are like Michael Jackson and Lisa Marie Presley- this marriage looks odd, and it might not last, but in some ways it's a match made in heaven.

Take for example The Meek Shall Inherit Nothing. The Persuasions deliver authentic down-home gospel. But the lyrics are anything but- :

"Those Jesus freaks well they're friendly but the shit they believe has got their minds all shut up and they don't even care if their church take a cut ain't it bleak when you've got so much nothing."

In Find Her Finer the song begins as a standard "take-my-advice" '50s song:

"If you see a girl on the street
Maybe you might think she's sweet
If you want to tickle her treat
now really what should you do?"

But the advice is far from standard:

"Don't ever let her know you're smart
The Universe is nowhere to start
You got to play it straight from the heart or she'll denunciate you."

Other songs deal with racial identity, politics, and fornication in the same kind of quirky, no-bullshit prose, which can only be Zappa. Even the last note of the CD, a hidden track (Mystery Track) is a funny, touching and beautiful tribute that gave me both chills and a smile in the silence to follow.

Admittedly, the Persuasions play a little fast and loose with pitch and blend. But that's just not the point of this CD. So don't get hung up on it; it reflects poorly on your character. Frankly A Cappella is about the genius of contrast and the power of soulful voices finally singing an honest message. Let me hear ya say, "Amen!" LOUDER! Good. Now go buy the CD.

The Persuasions sing Zappa...interesting combination, especially since my experience with anything Zappa-like has been either about him in print, or from his well-named kids. So to me, it's almost like an album of all new music. And with this album, the Persuasions re-infuse my interest in doo-wop street corner harmony with this album of easily digestible music.

If there's anything that I can state definitively about this album, it's that I'm more curious about the original works of Frank Zappa. Short of that, the Persuasions have taken Zappa's material and laid claim to adding their unique harmonic style to these particular songs. Included in this album is a wonderful detailed history of not only the Persuasions' introduction to recorded music and a contract, but also how Frank Zappa was instrumental to their national prominence. It lends to the connection between the two, and makes the concept that much more open to acceptance.

All of the musical tracks are absolutely incredible, and one has to wonder if any thought is being given to releasing these as individual singles. While they wouldn't achieve stunning success, it would be quite a coup to see it happen.

The only minor flaws that I found were getting through the interludes included as a sort of palette cleansing effect. It didn't detract from the overall product, but it certainly didn't help me appreciate Zappa's music any more.

While the idea of following up a children's album with a tribute album to Frank Zappa may not be the most logical idea, the Persuasions serve this up with the same energy, drive, and heart. Trust in the Persuasions, they know what they're doing, even if we're not always sure.

The Persuasions are pioneers of a cappella. Unfortunately this is not one of their shining moments.

This is a tribute album to Frank Zappa, who had considerable influences on the Persuasions' career. The music, however, didn't seem to fit in with what made this group. While I'm not all that familiar with Zappa's work, by listening to the words and reading the titles of some of his songs recorded here, he seems to be kind of out there. This is almost the opposite of the down to earth sound of the Persuasions. They have a gritty, honest, street corner sound that goes so well with doo-wop.

I kept expecting to hear vocal percussion and distortion pedals on this album, but there were none. It needed something to keep my interest. I found myself easily bored with the arrangements. It was the same thing over and over again which makes it difficult to listen to again.

I was also a little miffed by the "Interludes". They were each basically eight seconds of nothing thrown in the middle of the disc. If they were supposed to have a higher meaning, I guess I missed it. To me, they were an annoyance.

If you haven't guessed already, I was not impressed with this album. If you're new to the Persuasions, I'd suggest one of their earlier works to really get what these guys are all about.

Great Googly-Moogly! Frankly A Cappella — The Persuasions Sing Zappa is another first class project by a cappella's most seasoned veterans. It's impossible to find a better tribute to bestow upon a fellow musician than to record and produce an album of their music. This tribute to Frank Zappa and his wife Gail showcases some of Frank's greatest works performed with the fervor that only a group as talented as the Persuasions could.

It's very difficult to say a bad thing about anything on this album. Every track on the album is performed with the highest possible regard for musicality and style. The only thing that bothered me about this album were the interludes. The liner notes claimed that the interludes were supposed to give "a little nod to the composer's avant-garde side". It's tracks like this that kept me from giving this album the highest possible score. Tracks like this may be funny or amusing to the groups, but to the average listener they're just annoying.

Let me give a couple quick warnings to listeners who may want to buy this album. If you've been living in a shell and don't know the style of music that the Persuasions perform, there is no rhythm section to any of the songs. You won't find any vocal percussion, with the exception of minor percussive sounds on You Are What You Is, or elaborate studio effects on this album. Sure there is the occasional clapping in the background to get the groove going, but as a whole it's a strictly vocal groove. In addition, if you don't like Frank Zappa's music, you may not like this particular Persuasions album. The best way I can describe the sound on the album is a down-home southern sound with a whole lot of soul!

At first I was a little skeptical of this project. I was born in 1977 and embarrassingly didn't know much at all about Frank Zappa or his music. The first time I listened to this album there were only a handful songs that I really liked. Unfortunately with music being as subjective as it is, if you don't like the songs on an album, even if they're performed by a group as good as the Persuasions, you won't like the album. After a few more times through this album I finally began to hear the songs. I couldn't take it out of my CD player. I found myself singing along to the stereo and even humming riffs while sitting through Dr. Wunderlich's microcomputer architecture final. (Yuck)

The humor on this album is tasteful and funny. The sound on this album is rich and soulful. If you don't like Frank Zappa or his music, then go buy any other Persuasions album; you won't be disappointed. But if you truly love music, it's my honest opinion that you will love this album.

Voice quality, both tone and pitch, decreases with age, and aside from their tenor, it is easy to hear it. This CD is like the time I saw Chita Rivera in Kiss of the Spiderwoman. The singing and dancing she did was great for a woman in her seventies, but a twenty-year old could have done it better.

The lead vocalist has a very distinct voice and vibrato, and in Lumpy Gravy and any other section of a song that was entirely "instrumental", he didn't blend at all. In Love of My Life there were pitch issues in the solo. It also got a bit tiresome that he was the only one soloing. This was definitely not barbershop, so where is the variety?

An interesting thing they did on several songs was to include instruments. There is a trombone solo in Cheap Thrills and a guitar is used in My Guitar Wants to Kill Your Mama. I think a trombone was used in Tears Began to Fall, but it was not credited.

The artwork looks like it was done with scissors, tape, a bunch of random pictures, crayons and a ten-year old child. They could have done better than that. The interludes and mystery track are just plain weird. I don't understand how they positively contribute to the album. At least the longest is only 1:13.

For some reason, Zappa's music itself just didn't do anything for me, which made it very difficult to review this album. Based on RARB criteria, this is an above average product, but I just didn't like it very much.

What the Persuasions do have is soul, personality and energy. I can tell that they had a blast making this album. If you like the Persuasions and/or Frank Zappa, add this CD to your collection. It is a nice tribute to a man by a group who owes their fame to him. Just read the three panels of text in the booklet.

Available at all major record outlets, or directly by calling 1-800-409-2457 or visiting the EarthBeat website.