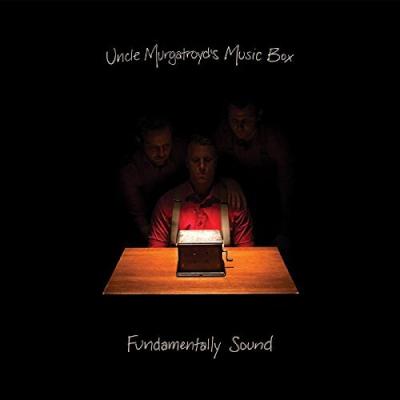 Fundamentally Sound really epitomizes its name with its newest release. This all-male group from the University of Wisconsin-Madison has a knack for breaking down songs into fundamental elements to explore different shades of meaning. Of course, with an album titled Uncle Murgatroyd's Music Box, there's plenty of fun to be had as well.

While not a perfect album, there is quite a bit going on that deserves recognition. When Doves Cry takes a close look at the lyrics and creates a choral soundscape that evokes thoughtfulness. Pumped Up Kids does the same, though with less effect. The group's sensitivity comes through via the soloists as well, as is aptly demonstrated in the opening track, Holding On To You. And I was equal parts excited and dismayed to see Uptown Funk on the track list as I love the song, but find it overly-saturating the a cappella scene. Much to my relief, the guys of Fundamentally Sound kept the heart, while making it just enough their own to stay interesting, complete with an admirable, and not too lengthy beatbox solo.

There are three things that keep this album from working to the fullest extent. First is the production. The super clean and compressed nature of the sound hinders much of the emotional resonance that many of the arrangements would otherwise possess. The second piece is the percussion choices in several songs. The focus is so heavy on the kick and snare that the hi-hat and upper frequencies are either non-existent, or are not present enough to fill out the soundscape, leaving a hollow, empty feeling; Bang Bang suffers from this in particular, and the slightly show choir/majorly intensive arrangement only exacerbates it.  The final issue is with Stayin' Alive. I love the song, and the arrangement is perfectly serviceable, but it sounds like Mickey Mouse singing rather than a sexy male falsetto voice. It's a subtle issue of placement and vowel shaping, but it's enough to make the difference.

Despite these setbacks, this album makes me happy for a very specific reason: these guys take chances and still manage to maintain a style that is unique to them. This passion for the craft dominates Uncle Murgatroyd's Music Box and makes it a gem that is worth adding to any a cappella collection.

I'm not sure who this "Uncle Murgatroyd" is exactly, but I want to get my hands on his music box and keep it for myself. Fundamentally Sound, with the help of Ed Boyer, Dave Sperandio, and the crew at Plaid Productions, has delivered an album that is not just dynamic and fun to listen to, but is also an album with creative arrangements that are beautifully sung from top to bottom.

We'll start with quite possibly my two favorite tracks of the album — Bon Iver's Heavenly Father and Walk The Moon's Iscariot. The three soloists on the former track, Mike Fuller, Josh Junig, and Karan Aditya, are absolutely great as a trio, sharing the opening verse and chorus with staggered entrances (similar to how Ingrid Michaelson sings her final chorus of The Chain) and ending with a gorgeous three-part harmony. And Lucas Rapisarda and Aditya deliver a beautiful, yet somber duet in the latter that takes you on quite the reflective journey. But, in both of these tracks, what stands out above all else for me is the musicality of the background vocals. Both arrangements do a great job in letting both the soloist and the backgrounds have their own moments, utilizing both silence and soft vocal dynamics to allow the solo to shine. But, even at a soft volume, the background blend on each and every vowel, whether they are echoing the solo line or just supporting on a sustained "ooh", is nothing short of stellar — like it's only three or four voices supporting the soloists rather than fifteen. Anything less than what was recorded, and I don't think the arrangements would have had the same impact on the listener as they do currently. The only downside of these tracks ... they just aren't long enough. Seriously, I could listen to these two tracks alone on repeat all day.

However, they aren't the only two tracks on this release that pack a punch. Fundamentally Sound proves the group can break out the radio hits, both the current and the classics. Uptown Funk grooves the way that you want the song to, with Luke Dutelle crushing it on the solo and Peter Anderson, who provides the vocal percussion on a majority of the tracks, replacing the second verse with a brief, but pretty sick breakdown. Runaway proves that these guys can take their listeners to the club, with slick effects and a great beat in the chorus specifically that gets me dancing around my apartment. Pumped Up Kids, a mashup of Foster The People's Pumped Up Kicks and MGMT's Kids is very cool — arranger Lee Stovall (who also arranged Heavenly Father) does a great job of varying tempos and dynamic levels while blending the two song together, keeping listeners on their toes and providing quite the aural experience.

Even with all of these great moments, I have some small critiques. Bang Bang and Stayin' Alive, while both fun tracks, do not have the same emotional impact that I feel in some of the other tracks mentioned. Both songs are really high for the soloists, and while the leads do an admirable job with both songs, there are certain moments where it can sound a little strained — I wouldn't have been opposed with the key dropping a little bit to help them out.

On its face though, this is a really fun, emotional, and exciting release that Fundamentally Sound should be really proud of. Now, excuse me while I go back to listening to Iscariot and Heavenly Father for the rest of the day...

The last time we heard Fundamentally Sound sing a full-length album was in 2012 (Sound the Alarm). That's four long years keeping their fans hungry for more awesome recorded a cappella music. I fell in love with that group after hearing the high octave tenors and the intricate arrangements that showcase the group's exceptional musicianship. Fast-forward to the present generation of FS in Uncle Murgatroyd's Music Box, and these guys continue to deliver astonishing collegiate all-male a cappella music.

Uncle Murgatroyd seems to have an interesting collection in his music box. FS really knows how to draw a listener's attention just by track positioning, starting off with Holding On To You that is instantly charming from the first note until the last. Rapping seems like an easy task but not when you'd have to blend those lyrics in harmony. An EDM track, Runaway, comes next showing off the impressive usage of studio tricks to make it sound club-worthy. I think FS performs Iscariot better than the original artist (if that doesn't offend anyone). The choral approach gives this song so much color and character by chord sustenance where appropriate. The vp and bass shine most in Uptown Funk, and it is by far my favorite cover version. FS scores another brownie point for fun and musicality by adding unexpected chords.

Lee Stovall contributes interesting music choices in Uncle Murgatroyd's Music Box. Many groups sing Billboard's current top hits, but FS performs a wide mix of genres on this album; I was totally unfamiliar with some songs but I ended up loving them. Also, Bon Iver's Heavenly Father and Prince's When Doves Cry are arranged in a simple choral style but the delivery of the messages follows an effective trajectory that takes the listener to majestic climaxes. However, one of the belting soloists in When Doves Cry comes off a bit pitchy/shaky but is redeemed by the backing chorus in the end.

Austin Schopbach, Mike Fuller, and Alex Becker nail those high notes without sounding like boys just before hitting puberty in Bang Bang. Also, Brett Kissel gives justice to the Bee Gees track Stayin' Alive, and the modulation towards the end paves the way to a great coda. Peter Anderson deserves special mention as the group's vocal percussionist. His skills give life to the tracks in this album. Don't get me wrong, FS sounds amazing on choral style performances but the vp is an added bonus. Can't Hold Us wraps up the album with another rap and it's like a saddening farewell to fans who want more.

I definitely enjoy this album just as I love the previous ones. It's also worth the purchase when you already know what to expect from this group. Some song selections in this album may not be as accessible, but Fundamentally Sound gives these song choices so much heart — that is worth an a cappella lover's attention.