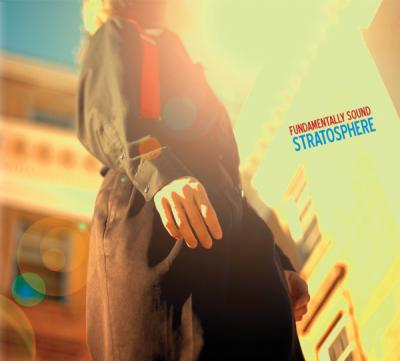 On the plus side, Fundamentally Sound delivers both creativity in their arrangements and high energy and focus in their deliveries. That alone manages to keep their scores in a respectable range. Unfortunately Stratosphere suffers from a common problem: humorous sounds are presented as if they weren't funny. The awkward disconnect prompts listeners to look around as if to say "You just heard that, right?" But then other sounds — bass, percussion, leads, some electronic effects — are processed artfully and to such a degree as if to say, "Take this group seriously. We belong on the radio alongside major label artists." The underlying tensions in Fundamentally Sound's basic building blocks keep us forever deconstructing them, looking for the elusive meaning behind their choices. But for those who long to lose themselves in the music, Stratosphere ultimately frustrates.

There are many interesting moments. Died in Ya Arms presents an unexpected rap section. Killin' in the Name catches the ear as a dark introspective ballad. I Believe in a Thing Called Love is the album's most inspired and effective arrangement (until it abruptly stops). Superstar boasts an exceptionally soulful lead. Closer's hot production makes it Stratosphere's clear party track.

While flaws abound, they are best exemplified in The Luckiest. This track, perhaps one of Ben Folds' most moving compositions, is an unhappy battle between robotic autotuning, aggressive bass enhancement and a natural choral arrangement with classical phrasing, and a very genuine lead. As the old saying goes, this creature is neither fish nor fowl, and though we may admire the individual elements (the arrangement is actually quite lovely), the final effect is tragically flawed.

It's easy to imagine that Fundamentally Sound's energy and creativity leap from a live stage in a way that could not quite be captured on Stratosphere. They have both a sense of drama and charisma, but in the end, Stratosphere is neither a must have, nor a must avoid, but rather a moderately polished yearbook.

There are lots of beautiful voices in Fundamentally Sound. But the bulk of the group's album Stratosphere sounds like an ideal fit for a Lite FM station to play. Heck, they even made a Rage Against the Machine number mellow. And while this is not such a horrible thing, it's also not a very interesting listen with so little contrast.

Fundamentally Sound certainly has the right vibe for this type of easy listening repertoire. I believe the Bublé, Vandross, and Folds. I believe the High and Dry and Boston. But it's just all so much of the same mid-tempo, laid back, pretty tunes without anything really special or memorable. The group doesn't take many chances to make this material their own. How about a faster, zippier Died in Ya Arms instead of one that feels undertempo for its duration? Maybe a bigger High and Dry is in order instead of such a contained, soft version. And maybe bigger spotlight moments when the climax hits on the driving ballads like Let Love In and Boston.

Excitement finally rolls around to close the album. I Believe in a Thing Called Love is energetic and surprising. The Luckiest still belongs on the Lite FM station, but goodness is it gorgeous and effective. And Closer just feels like the right ending — it's fun, it's vibrant, it's what there should have been more of prior to the very end of Stratosphere.

Ultimately, the gentlemen of Fundamentally Sound will have to find a way to leave their signature on well-known hits. One technique they do try is super staccato syllables in their arrangements. Normally this type of delivery is great and just right for a cappella — very percussive and crisp — but when this technique turns up in every arrangement as a kind of main layer, it again doesn't create much contrast. I'm also not convinced it's appropriate for some numbers, like Superstar and Lost. But, it's a signature nonetheless.

Next time, they'll need to use their voices to sign in bold ink.

It's amazing how quickly new collegiate a cappella groups can develop a fan base, build up a bankroll, and churn out a full-length album these days. Fundamentally Sound was only founded in the fall of 2005, but they certainly don't sound like a group that's wet behind the ears. Their first album, Stratosphere, is a solid — though imperfect — collection of music.

You gotta hand it to Fundamentally Sound for consistently delivering interesting and unique arrangements. Right up front, I need to mention Lee Stovall, the man behind the majority of the group's charts. Lee does a fantastic job of keeping songs fresh and engaging without sounding tacky or overpowering. He's the only arranger to date to have made a Rage Against the Machine song bearable for me to listen to. (His treatment of Killin' in the Name is phenomenal.) Although the setlist includes some collegiate a cappella standards (The Luckiest, High and Dry, I Believe in a Thing Called Love, etc.), Stovall manages to make them all sound fresh.

Beyond the superb arrangements, Stratosphere offers some energetic performances and a few quality soloists. Most of the songs come together nicely, and in general, you'll be pleased with the quality of music the album provides.

Several elements, however, hold this album back from being a true standout. The group sound is pretty solid, but doesn't always do the material justice. Songs like Died in Ya Arms and What You Got would be that much better with a little more attention paid to pitch, tone, and dynamics. On some tracks, the pitch is dead-on, but on others, intonation issues are more noticeable. This seems to be more of an issue of consistent production than the group's singing (unless mine ears deceive me). Soloists range from average to commendable. (Peter Goitom on Closer is particularly strong.)

Overall, the creativity and energy's here, but the musicality needs a bit of work. Even saying this, I'd recommend getting your hands on Stratosphere. It's got some nice tracks, and if you appreciate fine arranging, it's definitely worth a listen. Judging by how quickly the guys have progressed already, I'd say it won't be long before they're nailing some of the tougher stuff.

To order this album, visit Exclusive Co. and B-Side Records in Madison, or CDBaby.com or acaTunes.com.