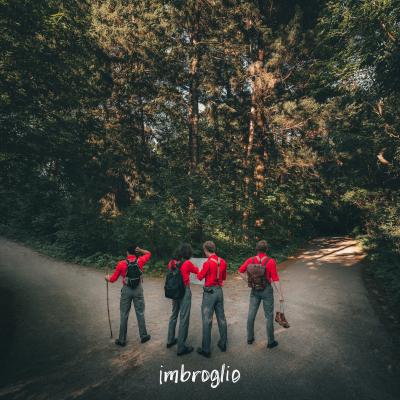 Imbroglio leaves listeners with an assortment of feelings and revelations. But perhaps the most evident one is that the members of Fundamentally Sound are entertainers first. Their latest album is rich with standout moments of admirable artistry, but for me, the group's seamless ability to pair high-class vocals with jaw-dropping entertainment sets Fundamentally Sound apart from its peers.

Right out the gate, Fundamentally Sound blows the roof off the joint with one of the best original songs to come out of the a cappella scene in years. A Cappella 101 is playful, cool, well-structured from beginning to end, and loaded to the brim with nearly every a cappella stereotype you've ever heard. While it's extremely comedic, it never once substitutes the group's vocal excellence for the sake of trying to land a joke. One listen will convince you why it won a 2021 Contemporary A Cappella Recording Award for "Best Humor Song". Did I mention that the group found a way to incorporate a Fix You joke?

Each track that follows takes on a life of its own. The live bar atmosphere created for Tennessee Whiskey is superbly fitting as it's paired with the warm and subtle stylings of the backing group, which exudes a wonderful southern charm, especially during the harmonies. Brother is heavy with lament, showcasing a drastically different gear by the group. Fundamentally Sound leans so much into being vulnerable through fluctuations of energy and intensity, steered masterfully by the passion of the lead vocalists.

Where Fundamentally Sound excels the most comes in its grand showstopping numbers.

Wait for My Shot is arguably one of the best mashups in a cappella history! Combining Wait for It and My Shot from Hamilton, Fundamentally Sound executes a flawless buildup of artistic magnificence with effortless transitions, modern music appeal, an impressive rap flow and spectacular chord execution. Each of the song's individual parts, including the hard-hitting percussion, culminates into a grand performance.

Previously released as a single, Silhouette showcases how effective pacing can be when done right. Nothing in the song is ever rushed, allowing the dynamics to wash over listeners and the soloist to deliver a gentle and captivating performance. There is so much in this track that is so audibly pleasing. And No Me, No You, No More, while heartbreaking, is majestic to experience. Each moment of unison is breathtaking and shows how vital blend is to any a cappella group.

Where Imbroglio struggles has less to do with vocal delivery and is more centered on conviction. The group at times comes off as mechanical, such as in some of the backing parts of Tennessee Whiskey. And certain tracks simply need an emotional boost, such as Blood I Bled.

And still with these minor imperfections, Fundamentally Sound has managed to give listeners a great album in Imbroglio with its larger-than-life sound, pristine harmonies, and even a few award-winning tracks. The project should be commended and is worth returning to regularly.

Some things in life just aren't fair. The fact that Fundamentally Sound can pivot on a dime to switch from side-splitting comedy to strong emotional connection is one of them. The suspenders-clad Wisconsin-based group has a reputation for this duality, and Imbroglio is the newest example. This album has a little something for everyone, and is a must-have for any a cappella collection.

Let's start with the funny stuff. A Cappella 101 is a parody of Marianas Trench's Pop 101 that squeezes an ungodly number of modern contemporary a cappella tropes into less than four minutes of music. I happened to see this performed live as part of an ICCA set, and could not stop laughing at the inclusion of Coldplay's Fix You. Arranger Luke Dutelle deserves a gold star for the arrangement and a slap in the face for forcing the a cappella community to be so accurately parodied. Wisconsin delivers a similar method, rewording Ylvis' Massachusetts to the same level of parody. As a Wisconsin resident, this track hits a little close to home, but still never fails to bring a smile to my face. These are pieces intended purely as comedic, but keep a high level of musicality.

On the opposite end of the spectrum, we have pieces like No Me, No You, No More and Brother. These pieces are just dripping with emotion. No Me, No You, No More utilizes so many different ways of presenting the story. Whether it's one person, a unison duet, or a group choral moment, the group has a complete understanding of the emotional impact throughout the song. The number of soloists mirrors the large scale dynamics of the piece while still allowing the group to swell and diminish within each of those moments, resulting in some serious impact. Brother is set up to let Jordan Fortek tell his story. The little intricacies in the background keep a feeling of motion without overpowering the soloist. But, more importantly, the lack of intricacies tell the listener exactly when there is only one person to pay attention to. The difference is like shining a musical spotlight on the soloist, and Fortek does it beautifully. Oliver Cardona really outdid himself with these arrangements.

However, what really makes this album a little something for everyone are the pieces that should feel out of place on a release like this. Wait for My Shot is a Broadway mashup of two songs from the musical Hamilton. I'm always terrified when a group performs a song with any semblance of rap lyrics, but Zachary Zimmerman has some serious flow. This piece isn't a whole bunch of nerdy a cappella guys in suspenders trying to rap and failing to feel the piece, it's a bunch of nerdy a cappella guys in suspenders fully understanding what the song is and delivering it at a high level. There's even Daydreaming, a piece that walks a tightrope between choral and digital influences. Lee Stovall's arrangement is breathtaking and the group's execution is flawless. If this group decides they want to do a certain style, it will figure out how to make that genre of music in its wheelhouse.

Imbroglio is an album I can listen to over and over again. There is always something novel to unpack. Even after multiple listens to the album, I'm still finding new things in each song. They are all unique, yet still feel like it's from the same group. Fundamentally Sound has figured out a way to have a wide breadth of styles, with nothing feeling out of place. However,  because of this array, it makes the album easier to listen to. I'm not tired after listening; I want to go back and listen again to see what fresh thing I will find. Check out Imbroglio to see what awaits you.

While the title suggests a confusing mess, Fundamentally Sound's latest album Imbroglio in fact showcases stellar musicality, arranging, soloists, and album construction. And the group's penchant for risk-taking comes through even more strongly in both the light-hearted and the dramatic tracks.

Sometimes these musicians create showstoppers like Silhouette, which won RARB's 2020 Single of the Year and for which I praised the group's ability to create a lush, evocative soundscape, reminiscent of "a sublime oil painting of a ship caught in a stormy sea". The final four tracks retain some of that dramatic, soaring quality, including the ethereal Daydreaming and the choral, and at times stilted No Me, No You, No More. I still have chills thinking about the final chorus of the anthemic Brother, helmed by soloist Jordan Fortek and arranged by Oliver Cardona. To close the album, arranger Ben Hecht transforms the already formidable Blood I Bled by The Staves into a force of nature. In addition, the song samples Brother and opens and closes with the same wordless intro as Silhouette, binding the melancholic back-half quintet together.

In contrast, the first half of the album tends toward the opposite side of the emotional spectrum. The group offers an excellently sung and inventive version of Britney Spears' Baby One More Time (although the vp solo was excessive and out of place), and a vibrant, compelling take on Tennessee Whiskey fronted by silky-voiced soloist Luke Dutelle, who arranged both songs.

But it is with the remaining three tracks that the group takes some of its most daring creative risks, two of which pay off. The infectiously fun Wisconsin delivers a fantastic parody of the parody group Ylvis' Massachusetts, complete with many state-specific references that demonstrate Fundamentally Sound's genuine affection for their university's state. And though well-sung and technically impressive for its many musical quotations, I found Wait for My Shot, a mashup of songs from the musical Hamilton, difficult to follow, perhaps especially if you know the source material.

And then there's the tour-de-force first track, A Cappella 101 (for which there is also a music video, which is another parody of a parody, this time of Pop 101 by Marianas Trench). Fundamentally Sound trains its caricature at the clichés and stylistic idiosyncrasies of ICCA and contemporary collegiate a cappella more broadly, such as rushing the front of the stage or ending a song with a half-time chorus. The song is also rife with lyrical and musical allusions that appeal to a cappella insiders and novices alike, including a Pitch Perfect send-up and a quick quotation of The Nor'easters' Jaywalk. Much credit for this spot-on track goes to arranger Dutelle, lyricists Daniel Viveros and Zachary Zimmermann, and soloist Hecht.

Throughout Imbroglio, impeccable editing by Alex Green/Plaid Productions, mixing by Ed Boyer, and mastering by Dave Sperandio foreground the group's excellent singing and bring to life its creative visions. With that wind at its back, Fundamentally Sound swings for the fences and knocks down more than a few homeruns.