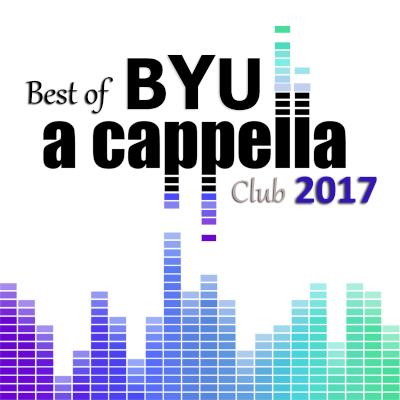 Brigham Young University is a collegiate a cappella powerhouse, with nineteen active a cappella groups on campus. BYU Noteworthy and BYU Vocal Point are managed by BYU, while the remaining groups are student-run. Almost all of the student-run groups are members of BYU's A Cappella Club, which exists to support and promote its members. (Full disclosure: the club's faculty advisor and producer of Best of BYU A Cappella (BOBAC) is John Colton, a current RARB reviewer.)

How tracks end up on BOBAC is rather convoluted. Noteworthy and Vocal Point are automatically in with two songs apiece, selected from previous recordings. BOBCA 2017 is a bit of a misnomer for these groups as Home was released on Vocal Point's 2008 album Nonstop, and We All Need Saving was first heard on Lead Thou Me On, the group's 2012 release. For Noteworthy, Apologize was released in 2009 on Green Means Go, while the group's most current submission (Drag Me Down) was put out recently enough to count — it appeared on the 2016 album Ready for a Miracle.

Nine tracks were funded by the club and recorded specifically for the album. Club members auditioned for a spot on the album, with eight groups selected and one lucky group (Duly Noted) receiving two tracks. Club members were also afforded the opportunity to submit songs they recorded on their own. This year, In Tune landed a track with Unchained Melody / Can't Help Falling in Love.

On the whole, BOBAC is well-sung and solidly produced. While no arrangements stand out as particularly outstanding, there are a few that are overly simplistic and detract from the impact of the piece (Car Radio and Wildest Dreams Mashup are examples of this).

There is also a distinct lack of energy throughout the album. Much of this is due to song choice. It is no mistake that the two most exciting tracks come from Duly Noted, who selected bouncier pieces (Better When I'm Dancin' and No Matter Where You Are).

In the end, BOBAC 2017 is a mellow listen, featuring midtempo songs and a pleasant pop sensibility. It captures a snapshot of a cappella at BYU, and demonstrates that the school's bench for musical ability runs deep. Sing on!

The various a cappella compilation albums released every year are some of my favorites to own. Between the Best of College A Cappella and Best of High School albums released by Varsity Vocals, the Voices Only albums released by Voices Only Productions, and the sing series released by CASA, there's something for everyone. They often highlight the cutting edge of what is possible and showcase some of the new groups on the scene that are starting to emerge. With BYU having one of the largest on-campus a cappella communities in the country, it seems only fitting that they have their own compilation album highlighting the best of the university. However, despite having the phrase "Best of" in the title, there seem to be a few blemishes that permeate through the album.

One of the largest gripes I have is the small love affair this album has with mashups and medleys. In an album of fourteen tracks, there are four with multiple original songs per number. Overall, I don't find these mashups adding much value to the overall album as they have a tendency to become oversaturated with too many ideas in one spot without being able to fully explore any of them. Consider the track The Middle / Heartbeat Song (1AChord). David Allen and Brittany Farnsworth open the number with a very reconstructed ballad of the Jimmy Eat World original but quickly abandoned the idea to transition to a more faithful upbeat cover of the original pieces. The track twenty one pilots medley (Familiar Ring) has this same issue, in this case resulting in a lack of a musical climax. Jacob Macmichael has a very cool musical moment of spoken word interwoven with his vocal percussion, but it's buried in the background rather than being a foreground moment that could tie multiple songs together. Instead, the transitions are abrupt rather than unifying. As a single medley, this would be a small blip on the radar. However, when medleys account for over a quarter of the album, I would like a bit more thought into either the number of medleys, working to make sure the medleys still present themselves well regardless of the quantity, or both.

On the other hand, there are a handful of tracks that have only a few small flaws. Duly Noted offers two tracks: Better When I'm Dancin' and No Matter Where You Are that are both just a lot of fun to listen to. Each track has a tendency to have too many percussive backgrounds that come dangerously close to muddling all the rhythms together but are still definitely worth listening and dancing to. Up-Beat's take on Send My Love (To Your New Lover) has a very cool opening with some glorious color chords before shifting into a more ballad-like presentation than Adele's original, which feels more aligned with the subject matter. However, the vocal percussion hinders the song by forcing the beat to remain very rigid when little bits of flowing tempo would be beneficial at letting the emotions shine. I could listen to fourteen tracks like these three on constant repeat. However, too much of a good thing is a bad thing, so a sprinkling of these types of tracks is a welcome addition to the bunch, but I would certainly love more.

Lastly, I want to talk about the tracks by Noteworthy and Vocal Point. I want to be excited about these tracks being on this album given the history of both of these groups. Both have won the ICCA (in back-to-back years, no less) and been competitors on The Sing-Off. However, three of the four tracks by these groups are more than five years old. I normally wouldn't gripe about a song from five years ago, except that since this is an annual compilation album the inclusion is confusing. This album would be more accurately titled Best of BYU A Cappella 2017 with Noteworthy and Vocal Point Past Highlights. Overall, the tracks are still good. We All Need Saving still remains a stellar modern ballad despite being recorded in 2011. However, the contemporary a cappella landscape is ever-changing. Home has a great sound and was one of the best a cappella recorded ballads of its time, but it's very repetitive — also very calm and peaceful but never has the climax that we're more accustomed to in the most recent recordings. Thus, the track feels out of place. On the other hand, Drag Me Down has some serious power and impact and is just fun. The two tracks sound like they were recorded at drastically different times. In a compilation album designated by the year of release, it's a flaw that doesn't sit well with me.

Despite the flaws, I will leave with this statement: Brigham Young University still has an a cappella program that is a force to be reckoned with. Many schools across the world have one or two groups that have a strong reputation for excellence and strong recordings to match. BYU has so many that they are allowed to pick and choose and create an album of the best on campus. It's not perfect, but it's still darn impressive. Will I happily wait for Best of BYU 2018? You betcha. Will I listen to 2017 over and over until the next album? That's less likely.

Best of BYU A Cappella Club 2017 is unique in collegiate a cappella. Every year the many talented groups on campus submit songs for a "best of" album, showcasing the university's talent pool. A Cappella Club 2017 achieves its goal of incorporating songs from several groups, genres, and styles. But its strength in this regard also exposes its weakness: that in a pool of eleven groups it is difficult to produce tracks that are consistently above average.

The third track, Send My Love (To Your New Lover), is representative. I was drawn in by the opening sequence and I think Aly Hardy's voice is a great fit for the solo. Unfortunately, the song does not hold my interest as a result of the arrangement and the seeming lack of commitment on the part of the group. The slow tempo combined with frequent use of drawn-out block chords and minimal dynamic change makes it hard for even the most energetic of groups to carry the song. The first minute doesn't sound all that different from the second or third minute, which should be a red flag. Additionally, soloist Aly Hardy does an okay job in the performance, but her voice is such a good fit for this song I was hoping for more intensity and commitment.

The mashups and medley are also hit or miss. I enjoy the Unchained Melody / Can't Help Falling In Love combination. The songs are great candidates for a mashup and In Tune does a good job with them. On the other hand, Wildest Dreams Mashup leaves me feeling underwhelmed. The arrangement feels disjointed and Attention's execution is subpar. Also, the key change halfway through sticks out. While key changes are a simple way to amplify intensity, they cannot act alone. Here, the key change cuts against the song by amplifying the song's lack of energy before and after. It is not supported and feels out of context as a result.

There are a few tracks that stand above the rest. I would include Home, Apologize, and We All Need Saving in this category. I particularly enjoy Brad McOmber's solo in Home and Tanner Nilsson's solo in We All Need Saving, both of BYU Vocal Point. They exude emotion and purpose in their singing. The arrangements create a dynamic background that compliments the soloists, showcases the rest of the group, and keeps listeners engaged. I also enjoy Kaity McGuire's solo on Apologize from BYU Noteworthy, which shows off her lower register and belt. These three songs are keepers.

The album is a manageable length with fourteen tracks and fifty minutes of running time. The opening and closing songs are well placed in the track list. And for so many groups and singers in one album, the production team does a good job unifying the sound within and between tracks.

Overall, this year's rendition of Best of BYU A Cappella Club is a pleasant listen and includes bright spots that listeners can add to their permanent library.