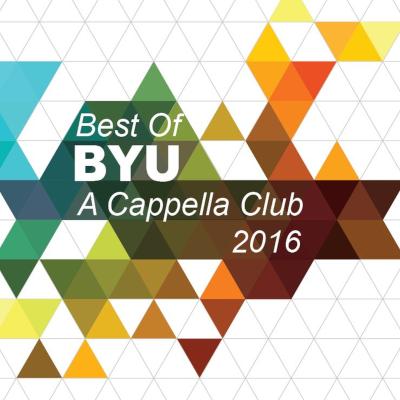 The BYU A Cappella Club supports new and existing a cappella groups on BYU's campus; there are thirteen student-run groups at BYU as of the fall of 2015, with two other groups (Vocal Point and Noteworthy) run by the University. With such a thriving vocal community, the Club has put together "Best Of" albums the last few years, which serve as a great opportunity for listeners to get acquainted with the BYU groups and for newer groups to get studio experience very early in their careers. (Disclosure: the Club's faculty advisor is RARB reviewer John Colton.)

I loved last year's Best of BYU A Cappella Club 2015; there were multiple memorable tracks there by groups I wasn't previously familiar with. This year's Best of BYU A Cappella Club 2016 doesn't have quite the same impact. That's not due to the recording quality, which is fantastic; all songs except for Vocal Point and Noteworthy's contributions were recorded, edited, mixed, and mastered by Scott Shattuck, and that consistent studio approach makes this feel more cohesive than a typical compilation album.

The most memorable song here is Vocal Point's fantastic Grace Kelly; soloist Buck Mangum does an amazing job with the lead, deftly shifting back and forth into a bouncing falsetto with exceptional accuracy. It's an outstanding performance, both by Mangum and by the guys singing behind him, but I was incredibly disappointed to see that this song came out on Vocal Point's 2011 album Back In Blue: Maximum A Cappella. It seems like an odd choice for a "Best of 2016" album to include a song that's five years old and features a soloist who's long since graduated. The other Noteworthy and Vocal Point contributions were released in 2014, which still seems a little old, but not nearly as old as Grace Kelly.

Several of the groups here are really, really new, and they sound like it: 1AChord, freeVerse, and In Tune all formed in the fall of 2015 — so the fact that we have professionally-recorded material in the spring of 2016 is impressive and commendable. But the newer groups' arrangements and performances don't stand up next to the more established groups. We Built This City (1AChord) has heart but just sounds simplistic, Remind You (freeVerse) drags a bit with its extended chords, and the arrangement of Geronimo / Brave (In Tune) just doesn't need to be a medley. (As an aside, shout-out to the whistler on In Tune's On Top of the World, who's uncredited in the liner notes but deserves kudos for the excellent whistle lines.) The production on freeVerse's I Want You Back is questionable as well; the soloists get drowned out by the backs and the percussion; it's a weak addition to the track list, but its issues might not be the group's fault.

The older groups fare somewhat better. Beyond Measure's Human is hauntingly beautiful thanks to soloist Abby Falke, solid percussion from Justin Liu, and dynamics from the group that help give direction to this ballad. Duly Noted does a nice job with the uptempo Raging Fire, and the gorgeous opening of Hello is fantastic, with the group joining in sections to create a dramatic intro. There's a moment when the bass comes in that's especially striking, and even though the rest of the song isn't that memorable, the first minute or so is a perfect mix of suspense, drama, and a gorgeous somber tone. Noteworthy's Feel Again is a fun and beautifully-sung performance, from rockstar arranger Catherine Papworth's charts to soloist Janae Klumpp's entrancing lead and the group's dynamics and execution. The arrangement of Familiar Ring's Stitches has a lot going on, but it really works; I wish there had been more than one track from these guys here, especially given how much I enjoyed their contributions to the 2015 BOBAC album.

One final disappointment on this album: all the medleys that follow the formula of Song A shifting into Song B and then back again. Either song of Wrecking Ball / Skyscraper could've stood on its own, but combining them doesn't add anything to either tune. Same thing goes for the Taylor Swift songs I Knew You Were Trouble / We Are Never Ever Getting Back Together from Noteworthy, and Provocalize's trilogy Radioactive / My Songs Know What You Did in the Dark / Sail. Hearing so many songs combined with the same formula starts to sound predictable after a while, and it definitely gets overwhelming when a compilation of seventeen different tracks actually represents twenty-two different songs. The component songs are some of the better performances here, but the unnecessary medleys actually detract from them overall.

As is to be expected from a "Best Of" album, there are a few standout performances here: Feel Again, Human, Stitches, and Grace Kelly especially (even if the latter is a bit outdated). The rest of BOBAC2016 is a mix of rough-around-the-edges new groups and formulaic medleys with a few other solid performances mixed in. In many ways, though, that's what makes BOBAC2016 such an honest compilation: BYU may have more groups than most college campuses, but the breadth of quality is the same. There are some groups that kick butt, some that are pretty good, and some that are still finding their sea legs. Even if not every track here is worth checking out, it is always fun to get a professionally-recorded and -produced snapshot of the BYU a cappella scene. It's a "Yearbook Album" of a whole different sort: a yearbook of the BYU a cappella community, with its superstars and rookies standing side-by-side.

Brigham Young University is a known entity for a cappella with good reason. The school-sponsored groups have had much success at high levels of the ICCA tournament, and the creative musical output of all of the groups on campus has been extremely high-caliber for many years. This compilation album is an excellent revue of the current status of BYU's groups (those sponsored by the university and those self-run). It is worth noting that the university-sponsored groups stand out; this is likely circular, as both BYU Noteworthy and BYU Vocal Point get the most support and likely attract the best talent.

Both Vocal Point and Noteworthy have two tracks each on the album, all of which excel. In particular, I appreciate BYU Vocal Point's Set Fire to the Rain, which feels significantly original. So many Adele covers wind up feeling performative, but this arrangement and solo voicing are smooth and inspired on the Vocal Point recording.

In Tune's recorded mashup of Geronimo/Brave misses the mark — not in production value, but instead of lifting both songs to a higher level, it does them both a disservice. The frenzied tempo creates a frantic feeling that permeates the entire track. Provocalize's mashup of Radioactive/My Songs Know What You Did in the Dark/Sail also misses the mark, losing all of the grit of the original Radioactive track in favor of the mashup. The end of the track picks up some, as they piece together an ending, but it is a frustrating detour to get there.

The Duly Noted track Make You Feel My Love stands out with a stellar solo performance and a simple, rich arrangement. Beyond Measure's Human similarly revolves around an impassioned vocal solo. Of course, it is difficult to judge a compilation album due to the wide variety of factors at play, but these two tracks are welcome respites from the driving pop beat of the rest of the album.

While this compilation isn't groundbreaking, it is a comprehensive look at the current status of BYU a cappella. That status? Strong.

This Best of BYU A Cappella Club 2016 is a highlights reel from ten of BYU's sixteen a cappella groups. Yes, you read that right: sixteen groups! To make the cut, groups generally had to audition or submit their tracks for evaluation. Twelve of the tracks were recorded specifically for this album.

As this album shows, BYU has an incredibly deep bench of talented cappella singers. It features great soloists (Janae Klumpp on Feel Again), interesting arrangements (Scott Shattuck's arrangement of Set Fire to the Rain; Shawn Gándola and Abner Apsley's arrangement of Geronimo/Brave), high-energy recordings (Stiches), and just down right fun songs (On Top of the World; I Knew You Were Trouble / We Are Never Ever Getting Back Together). Even though not all of the songs were recorded specifically for the compilation, the production team did a good job unifying the sound of the album.

That said, the difficulties of unifying seventeen songs from ten groups does show through at times. The first half of the album seems stronger than the back half. Part of that feeling may stem from listener fatigue from having a longer-than-usual album. Future compilations would benefit from a slightly shorter track list. I thought that the selection of almost all modern pop songs made the album feel unified overall, a hard feat for compilation albums. However, songs like I Want You Back and We Built this City feel out of place as a result — this is also something to watch out for in the future. Finally, by combining many tracks from many groups, the album inevitably includes songs that are more average in comparison to the stand-outs. Again, this can easily be addressed by making a shorter album.

BYU also did a meticulous job in the liner notes, providing credit for every singer, soloist, percussionist, arranger, writer, and original performer. It really shows off the range of talent that went into making this album possible. In the rush to get an album out the door, this is where groups can get sloppy, but the level of detail is appropriate and much appreciated.

Overall, the Best of BYU A Cappella Club 2016 compilation album delivers on its promise to give listeners the best at BYU. Go take a listen.