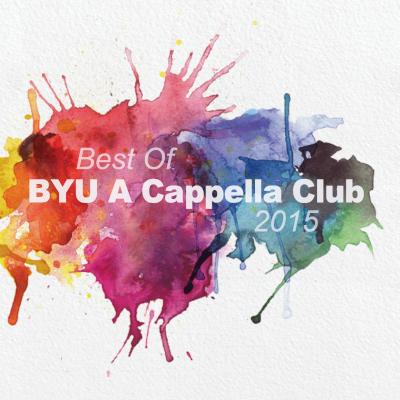 Best of BYU A Cappella Club 2015 features eight of BYU's thirteen a cappella groups, and all but four of these tracks were recorded specifically for this compilation (two tracks each from Vocal Point and Noteworthy were previously released on other albums). The fact that the same person recorded most of these songs goes a long way toward making BOBAC 2015 sound like a cohesive album and not a hodgepodge compilation.

The sound and performance quality of this compilation is outstanding, as one would expect from an album with "best of" in its name. But more than that, the songs and groups included here were selected after a rigorous audition process, and as a result, these truly sound like the best of the best of BYU, all presented in one unified album. There certainly are some truly memorable moments here: the dynamics on Skyfall (Provocalize), the first soloist on Songs From a New World Mashup (Attention), the gender swap and killer bass line on All About That Bass (Familiar Ring), and the hazy watercolor sound of Stay (Provocalize) are all ear-catching moments here. Vocal Point's recording of Danny Boy is phenomenal, and soloist Keith Evans wrote an additional verse which gives a fresh spin to this traditional track.

The only thing working against BOBAC 2015 is the song selection, which is a common pitfall on compilation albums. The track list skews heavily towards modern pop hits, with a few religious songs mixed in, so it's both a little monotonous and a little disjointed at the same time. Still, even with a few continuity hiccups, BOBAC 2015 is both a solid album on its own and a great introduction to the a cappella scene on BYU's campus.

BYU apparently seems to like a cappella. Like, a lot. While many colleges and universities might settle on one, two, or maybe even three groups, BYU has upped the game by being host to thirteen groups. Still, if quantity isn't the best indication of a cappella power, then the music should certainly speak for itself. That's where Best of BYU A Cappella Club 2015 comes in. As a showcase of the university's talents, BOBAC 2015 succeeds in providing an album that is both entertaining and diverse in its movements through different styles and sonic spaces.

BOBAC 2015 begins nicely with BYU Vocal Point's Dare You To Move. It's a solid introduction that injects a bit of early energy without being over the top. I appreciate how the guitar-like effects on the vocals are subtly added without distracting or detracting from the overall blend. The accents and engagment in the background really sell the group as taking a deep investment in the song.

Provocalize's Skyfall starts with a mysterious, smoky intro but ultimately ends sounding kind of underwhelming. The blend of the backing voices is smooth and well accented, but the song never quite builds enough momentum to deliver any impact. While the solo on this song adds a nice alternative character, it doesn't quite take the song in a direction that achieves the dramatic climax that my ear wants to hear.

Attention's Songs From a New World Mashup is a great change up as the album hits its midway point. Attention has an interesting balance here between a danceable, punchy vocal percussion and a more traditional bright, colorful, emerging choral sound that adds a lot of variety to the album's overall sound.

BYU Vocal Point follows on the next track with a terriffic cover of traditional classic Danny Boy. Vocal Point's iteration is seemlessly blended and kept simple and to the point. It's the dynamic swells and energy from the backing vocals here that help make it something special.

Provocalize's rendition of Stay is easily my favorite song on BOBAC 2015. It's a complete one-two punch between a dynamic, well-engaged background and soloists that sing the song like they wrote it. The soloists' contrasting timbres pair remarkably well together, and their combined ownership of the song really puts a fresh coat of paint on a recent hit.

In all, BYU's BOBAC 2015 is delivered the way a "greatest hits" album should be. With consistently intensely sung tracks and a selection that features a great range of arrangements and musical tastes, BOBAC 2015 is album that should please fans of a cappella and traditional vocal music alike.

This is the first oppurtunity I've had to review a compilation album, and it's certainly an interesting start. To kick off, there are a lot of groups on this product (eight, to be precise). As such, with such a varying composition of material and styles, it makes it difficult to get a solid message from this album. If the goal was to sell the best points of the university's a cappella scene, it offers some mixed success. Liz Tyler has an excellent turn on Give Your Heart A Break, as do Keith Evans on Danny Boy and Matt Winn and Daniel Rellaford on Beside You. Sarah Mason and Luke Elmer absolutely elevate Stay to an entirely new level; the building intensity as the two harmonize into the bridge is pure art.

I want to take another moment to talk about Danny Boy, a standout track on a mostly pop/contemporary album. I'm a huge fan of making unique arrangements of folk tunes. They're called standards for a reason, and they certainly give groups massive oppurtunity to show off all the great things no one else could hope to do. I would advise all collegiate groups to consider showing the world their own takes on classics, because if they can do it half as well as BYU Vocal Point, the bar will be set at an incredible place.

Everything else is hit or miss. Noteworthy's tracks may steal the show, but Attention's tracks drag them back down with "pretty and proper" singing, making sure all the vowels and consonants are "correct" instead of really diving into the music. Clean Cut tries to make something new of I Won't Give Up, which almost works, but the breakdown on the back half of the bridge gets sloppy and breaks the rhythm entirely.

Production is back and forth as well, especially odd given that the product is almost entirely mastered by the same company. Arrangements generally are standard fare, unfortunate given the massive pool of arrangers to be chosen from.

And here's the part that cans my peaches: the liner notes credit the song writers and original performers, even the album the group first released the track on (for Vocal Point and Noteworthy), and yet STILL no percussionists. I've soapboxed enough about this, so I'll leave it at that.

All together, this is a great sampler piece to see which groups you want to buy more of and which ones you don't. But I can only recommend a third of the tracks as a collective piece of a cappella.