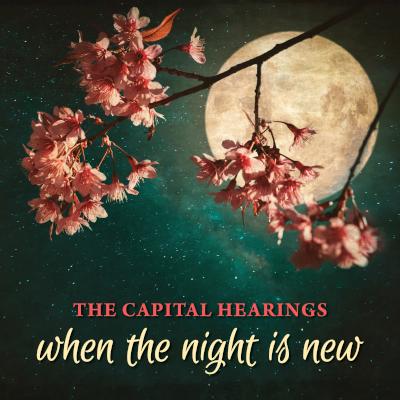 The Capital Hearings are at their very best on When The Night Is New. They breathe fresh life into works ranging from 16th century poems to mid-century swing classics; Poulenc to the Indigo Girls. From choralizing to crooning, bel canto to belt, you won't find a more varied, single artist release in a cappella this year; that's a certainty. Producer/directors Dileep Srihari and Mike Rowan have much to be proud of.

The Capital Hearings are an elegant ensemble above all else. Whenever their songs call for a blended, chamber sound, these 14(ish) voices do not disappoint. They phrase and float, they attack and fade, and they find beauty throughout their chosen works.

Where they join the ranks of the mere mortals is when their arrangements and song choices demand truly contemporary stylings: pop and rock, especially. At that point, the match is everything. Sometimes the pairing is perfection (the heart-wrenching Jaime Alvis on Tom Anderson's striking arrangement of Galileo, for example). Other times the result is worthy and enjoyable, but not quite in the rarified realms of their more classical and jazzy ensemble work.

Two bright and original lights on the album come in the form of The Astronomer and There Will Come Soft Rains, the 2015 and 2014 Winners of The Capital Hearings Young Composers Competitions, respectively. William Yanesh's sense of rhythm and text painting is an absolute, crowd-pleasing delight, while Connor J. Koppin's gentle suspensions and key-hopping bring chills. The new works are not only uplifting, but also a perfect match for the ensemble's proven strengths as shown on more familiar pieces like Poulenc's O Magnum Mysterium.

The Capital Hearings' most ardent fans are likely to be classically-inclined listeners who enjoy delightfully unexpected twists in programming. Great efforts have been made to research and present the hidden and thought-provoking connections between composers and poets: separated by centuries, but struggling in common ways with the patterns and cycles of their day. The liner notes alone are a treasure trove of information that make the CD far preferable to any digital download that might not include them.

The Capital Hearings are more akin to a pops concert than a pop group. The complex and artful choices of When The Night Is New are best enjoyed as just such a versatile and inspiring experience.

As a whole, When The Night Is New conjures up feelings for me that I've only ever felt by listening to The Swingle Singers. While The Capital Hearings have a bit further to go in the way of style and execution, the group's latest release is a polished blend of classical and modern influences that are warm, rich, and exceptionally satisfying.

To start, the album booklet is one of the best I've ever come across. The design fits the tone of the project and is beautifully done. The cover is mesmerizing, while the text found inside is meaningful and detailed, often highlighting the motivation behind a song's selection or rationale on why the track was arranged as it is.

As for the music, the works can best be summarized by a quote in the liner notes: "Our goal is to use universal themes to highlight the connections that bind music across centuries and styles."

Whether it's the bouncy, toe-tapping, jazz stylings of the album's opener It Might As Well Be Spring or the ominous and passionate delivery of The Tyger, The Capital Hearings infuse undeniable conviction into each track. The most fitting track that embodies this is Sunday Bloody Sunday. The track has a somber mood, which is intensified by the lead's emotional vocals that are laden with earnestness. The arrangement is brilliant as it captures the classical core of The Capital Hearings' style mixed with contemporary elements that can appeal to modern audiences. Dynamics are wonderfully controlled as each vocal line steadily builds with the song's progression, creating a delightful musical experience.

Another track that successfully balances classical and modern elements is Galileo. The structure of the arrangement is simply elegant as The Capital Hearings open with a gorgeous Latin movement that's captivating, then seamlessly transition to the Indigo Girls' lyrics in English. The piece is immensely inspirational, which is owed in part to a stunning female lead, the contemporary feel created by both bass and percussion, and the arrangement's ever-evolving nature.

The predominantly classical pieces on When The Night Is New also offer much strength to the project. The phrasing and the balance between the higher and lower vocals, which set a dark and light contrast to the tone, is immaculate on the Italian piece Io Son La Primavera, whereas O Magnum Mysterium, which offers a similar tone, has a more reflective sound quality and features exquisite soprano vocals.

When The Night Is New can appeal to both new and older audiences. It occasionally struggles in reaching its vocal peak, dynamically, such as Where Have All The Flowers Gone and in completely moving the listener with tracks such as Don't Carry It All. In other instances, many of the tracks lie on the heavier and gloomier side, which can affect replayability.

The Capital Hearings have a well-crafted, imaginative project on their hands with When The Night Is New. I hope that more contemporary pop groups would consider bringing classical music into their repertoire.

Excited anticipation doesn't begin to describe how I felt when opening up When The Night Is New for a listen. Since the Capital Hearings' first album, Opening Statement, was my Pick of the Year when it was released in 2013, I was excited to hear how the group had developed since that recording. In that review, I remarked that The Capital Hearings "were playing at a difficulty level much higher than I expected. This album jumps from genre to genre, alighting from modern jazz to alternative to classical without caring that these things often don't go together." Well, there's good news for fans of Opening Statement: When The Night Is New retains that sensibility and superb musicianship, while also moving beyond the group's original limitations.

No song reflects the genre-hopping better than Hey Brother, a track arranged by Rachel Rood and Mike Rowan that pairs a song by Avicii with Down in the River to Pray, linking the two via Dan Tyminski's lead vocals on the former and his association with Alison Krauss, who famously covered the latter. It's a tenuous connection between a traditional spiritual and recent contemporary pop song that surprises at every turn. The driving pulse of the pop song overtakes the loose spiritual, recedes, and then explodes at the nadir of the track. It's gripping.

I'm beyond thrilled that The Capital Hearings have both founded a Young Composers Competition and have included some of the winners on this album. There Will Come Soft Rains, by Connor J. Koppin, beautifully layers bright chords with undertones of conflict reflected in the lyrics. The echoing "singing, singing" refrain belies the ghostly character of spring. it's a stunning piece, beautifully rendered. I don't know how to categorize The Astronomer — it starts as a kind of madrigal-y musical theater choral work, I guess — but its plaintive second section surprises. Linked with the next track, a gorgeous rendition of Galileo by the Indigo Girls, it really speaks to the conflict of religion vs. science, or the spiritual vs. factual.

Even on tracks I don't love, there's so much going for this group. The arrangement for Where Have All The Flowers Gone moves in waves, just like the song. The intensity of the recording doesn't hit me (especially in the overemphasiezd fourth verse), but as always, The Capital Hearings have superb tuning that still gives me something to appreciate. Don't Carry It All suffers from a strained solo and tired "jig-a jig-a" background syllables, but there's an interesting quote from Hard Times Come Again No More woven in.

The recorded accomplishments of The Capital Hearings are incredibly impressive, especially when recalling that they are not traditional "professionals". Regardless of definition, this group continues to make boundary-pushing choices that delight. As the last track lovingly states, I hope we'll all be seeing you live soon.