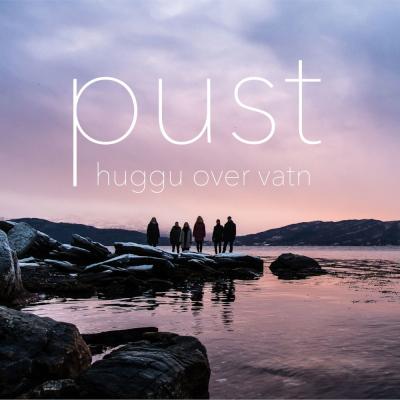 Huggu Over Vatn is my favorite a cappella album of 2017 and one of my favorite albums of any kind to cross my path this year. Pust sounds its heavenly best — shades of early music, jazz, and an extra quality all its own combine for one of the best vocal atmospheres you'll encounter. From wordless folk tunes to graceful orginals and a well-chosen Sigur Ros cover, all of the material is perfectly selected to please.

Pust truly understands how to use the voice as an instrument, with a color all its own. While the songs with words convey plenty of feeling, those without lyrics are equally evocative. Instead of imitating other instruments, the vocal lines complement them — sometimes literally. Gjermund Larsen's fiddle offers a wonderful counterpart on the title track and Påls Innehøner, while Lars Andreas Haug's tuba sounds almost like another vocal line. How refreshing, to hear an instrument imitating a voice on an a cappella album instead of the other way around.

The tracks with the instruments have a lot more going for them than just novelty. Påls Innehøner has a lovely syncopated rhythm and some very interesting vocal textures, while Huggu Over Vatn is a straight up lovely song. Ditto the entirely vocal Folketone fra Sunnmøre, which succeeds solely on the strength of its underlying folk melody.

The wordless songs on this record satisfy a craving I didn't know I had. From the very first listen, the floating lilt of Gammel reinlender fra Sønndala had me dancing before I really noticed the record had started. Salmevals sounds to me like an excerpt from a movie soundtrack, while Molde Canticle registers as the humming memory of a carol you might have heard in a contented time long ago.

Gjer Ein Annan Mann Ei Beine is my favorite of the songs that do have words. Female voices take center stage, as a gorgeous descant overlays the main lyric and a soft underlying pulse. It's hard to describe this song without falling into new age cliches or other stereotypes — suffice to say it's stunning and you should check it out. I also love the tenor solo anchoring Fljótavík, the cover. Really there is only one song I do not connect with, the peppy 240, Tuja Og Trampoline. While there's nothing wrong with the performance, I personally find it a bit cloying, especially after multiple listens.

If you are to only buy one record this year, this is a good one. And if you love music and seek it out regularly, Huggu Over Vatn will bring a welcome new energy to your artistic soul.

From the opening punctuated notes of Gammel reinlender fra Sønndala that seem to disappear down a sonic highway, it's clear that Pust has given us another album of what this group does best: an exploration of sound.

Keeping their arrangement standards a notch above the rest of the world, the singers of Pust have perhaps recorded their strongest release yet with Huggu Over Vatn. How about the bold choice of having five songs without any real lyrics, just a symphony of singing that allows natural resonance to reach its absolute maximum? How about two dance hall pieces (Huggu Over Vatn and Påls Innehøner) with real fiddles, percussion, and tubas(!), the latter of which features vocals that are so fused with the instruments that you simply cannot play one set without the other? To date, I have never heard anything quite as envelope-pushing at RARB as Påls Innehøner. And the unimagined source material the arrangers daringly venture to work from — Håvard Gravdal based the album's opening number from a Danish string quartet for the six voices in his a cappella group. What a creative leap.

And the vocal technique and execution! The musicians of Pust again stand alone here, all performing as beautifully on the lead microphone as nestled into the background ensemble. The primer for profoundly excellent singing on this album is Uten At Du Veit, and how richly fitting: the lyrics (based on an Emily Dickinson poem) speak of a passerby whose hummed melody catches and uplifts a sad stranger in need of comfort. When the Norwegian word for "melody" is sung twice in a row, the repetition impact does not go unnoticed or unfelt: you'll be absolutely lost in the warmth of this special song.

Huggu Over Vatn translates to "Head above water". While this meaning is universally applied to challenges in one's livelihood, Pust is so far above the water that this group is safety in celestial orbit. You can still hear natural, stunning musicianship in recorded a cappella. You can encounter new configurations, collaborations, and approaches to vocal music. It's right here, written and sung by Pust.

Floating on your back on a warm, not hot, summer day. Huggu Over Vatn ("Head above water") is the fluid supporting you from underneath while at the same time rocking you gently from all sides. It is a meditative experience, interspersed amicably with moments of playfulness and intensity. If you have been waiting for just the right time to bask in the music of Pust (Norwegian for "breath"), this is the album to do it.

Pust is a Norwegian sextet that has been performing together since 2003. On the group's 2013 album, Fryktløs, the production value was so minimalist that at times it distracted from the musicianship. I am thrilled to report that thanks to the engineering skills of Øystein Halvorsen, Huggu Over Vatn is a pristine recording that captures the cohesion and dynamic range Pust has to offer.

Another bold artistic decision is the accompaniment from a tuba (Lars Andreas Haug) on three songs, a percussionist (Knut Aalefjær) on three songs, and a fiddle (Gjermund Larsen) on two songs. It is not a typical instrumentation to my ears, but the synergy is brilliant. The tuba has a warm, round tone that melds effortlessly with Mads Iversen's bass parts. The percussion is light in the mix: a shaker here and some high hat taps there, with just a hint of kick drum to lock in the beat. For this pastoral style of music, here's a crisp alternative to the often pulpy or overproduced sounds of vocal percussion. The fiddle ... you could almost begrudge Larsen for stealing the show if you were not so delightedly smitten with his playing. Now to answer how exactly these instruments fit into the serenity pool.

Huggu Over Vatn drifts between three general moods. The predominant mood is tranquil, contemplative, and slightly somber. Dit Du Lengter, Folketone fra Sunnmøre, Salmevals, Molde Canticle, Fljótavík, and Om Kvelden are prolonged series of swells, overlapping in a mesmerizing array of harmony like ripples on the surface. Uten at du veit and Gjer ein annan mann ei beine have a similar shapelessness but are given direction by simple droning rhythms. There are no instruments in these songs, only the nurturing resonance of human voices.

Lest you float away in hymnals and ballads, Pust includes a few lively tracks to bring you back to earth. Our introduction to Huggu Over Vatn, Gammel reinlender fra Sønndala, opens with a mysterious round of simulated echos before erupting into a jazzy scat jam. The energy continues into the invigorating Huggu Over Vatn, a jig featuring the hearty tuba, toe-tapping drum kit, and stratospheric fiddle. The middle of the album brings a different kind of energy with Før vi Kan Snu and 240, Tuja Og Trampoline. These intermission tracks, punctuated with percussion in the former and tuba in the latter, are silly, staccato and swingy. The final hurrah is Påls Innehøner, a return to the fully accompanied jig before settling back into weightlessness.

Huggu Over Vatn is a restful reverie, with just enough charismatic melodies to keep your head above water. Even if you know no other Norwegian than what you gleaned from this review, the music of Pust is crafted with a feeling that transcends the limits of language.