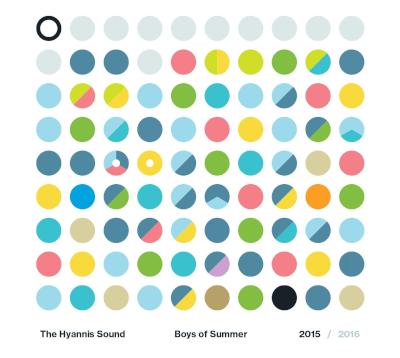 By now, we know what The Hyannis Sound is all about: this all-male collegiate supergroup gets together on Cape Cod every summer to perform at public and private functions across the area. It's a pretty sweet gig — what collegiate a cappella singer wouldn't relish the opportunity to spend all summer singing? — and those of us who don't live in the Sound's performing radius are treated to the group's recorded albums roughly every other year. For those curious what a Hyannis Sound summer is really like, the cover art for Boys of Summer depicts the singers' performance schedule: every circle represents a day, and each color represents a particular kind of show, described in the album's liner notes.

The songs on Boys of Summer are typical Hyannis Sound: lots of classic favorites interspersed with a few contemporary hits. Every song here is performed impeccably, and the singers in The Hyannis Sound definitely know how to craft a phrase. The dynamics and phrasing are on point; every performance tells the song's story and moves from start to end without sounding like each chorus has been copied-and-pasted. No album is ever a replacement for a concert, but if you'll never see The Hyannis Sound live, this album is a pretty close substitute. It's impossible to sit still during Turn The Beat Around or September, and the lush, velvety cover of All Night Long is beautifully-performed, from its sultry verses to its peppy choruses. With Or Without You grows at the perfect rate: this is how you do a crescendo, how you build a song from a whisper up, pausing at and savoring every new volume level instead of rushing up to a forte. It's a song we've all heard a billion times, but it sounds fresh and new here. But perhaps the best moment of Boys of Summer is the slow, sparse version of Landslide, which is entrancingly emotional. It's the kind of performance that makes the world stop around it, and taking this song extra-slow was definitely a risk that paid off for the Sound.

I've mentioned before in my reviews of The Hyannis Sound that I'd like a few more surprises in the group's repertoire; Boys of Summer features covers by Earth, Wind & Fire; Donna Summer, Stevie Wonder, Fleetwood Mac, Lionel Richie, and Otis Redding. It sounds like the singers spent an afternoon digging through their parents' vinyl collections, and I'm sure these crowd-pleasing favorites go over well with their summer audiences. There are still a few surprises here: Respect starts off with an unusual arrangement (kudos to Sound alum Noah Berg), and the unhurried performance of Landslide is especially beautiful. It All Fades Away is a surprising contemporary musical theatre song choice, and soloist Sean Switzer's unaccompanied lead at the beginning is an absolute showstopper.

Even without a ton of surprises, Boys of Summer is an enjoyable listen. It's always nice to hear a collection of songs performed joyously and flawlessly, whether they're old favorites or obscure unknowns. We as listeners know what we're going to get from a Hyannis Sound album — well-performed numbers with moving dynamics, excellent phrasing, and impeccable production — and Boys of Summer definitely delivers.

The Boys of Summer are back! I've been excited about The Hyannis Sound ever since I reviewed the group's last album, H2O. These young men just have a way of sharing so much musical talent and energy through the speakers that I can't help but fall in love with them. From the first riffs to the final chords, this album has a little something for everyone, and it's sure to be a long-running standard of excellence.

This album is filled to the brim with amazing displays of technique. This Will Be is a vocal marathon for Nick Oberlies, and he performs it beautifully. His tone is crystal clear throughout the intricate patterns that permeate this track and is only magnified by the register that he's sitting in. By the time he gets to the triplet figures around the 1:41 mark, my jaw is sitting on the floor. The notes are flying by, the lyrics are crystal clear, and the backgrounds are harmonizing with this pattern. It's absolutely unreal. Oberlies reprises his expertise in Turn The Beat Around, another one of my favorite tracks. Aside from Oberlies, Jon Smith is all kinds of sexy in Respect, and Alex Spears is rocking some serious swagger in I Wish. There's not a single bad soloist on this album. Heck, there's not a single mediocre soloist on this album. The technique is flawless; it's just a matter of who's presenting it on each track.

When we leave behind the technique, the arranging is amazing. It All Fades Away has a tremendous build. The arrangement flows so perfectly. Sean Switzer really outdoes himself on this one. The "den zeh" pulse during the bridge is a rhythmic push I hope to see permeate into new arrangements over the coming years. It gives a natural swell to the sound without overpowering, and the chords surrounding that pattern are a perfect combination of simple and colorful. Avi Montanez's arrangement of Landslide is also just beautiful. The emotions of this song have been amazingly raw since Stevie Nicks first performed it. Montanez takes that tenderness and makes it purely vocal, and it's absolutely amazing. The use of harmonizing with the soloist for accenting musical thoughts is an amazing choice, and the performance is breathtaking.

If I'm nitpicking on this album, my only complaint is the small obsession with the introductory statements of many of these songs. It All Fades Away has a 30-second intro that perhaps sets the mood and introduces some of the melodies, but doesn't necessarily help push the song forward as the soloist begins over silence. Another interesting arranging choice is Respect, which begins with a slower and more sultry groove for the first verse, which is then abandoned to transition to a more uptempo presentation with what feels like a gradual accelerando, all before closing with a return visit to the original style and tempo. None of these musical decisions are terrible in the grand scheme of things. However, on a track-by-track basis, the flow gets interrupted by where the arranger wants the song to go. I like the ideas, but without a clear path for the songs to go in these transitions, there are a few seconds of confusion.

Even with the smallest of blemishes, this album is still a masterpiece. This album will make you laugh, cry, dance, and wonder. It's an album I will continue to listen to as I anxiously await the next release this group produces — so let the music of Boys of Summer keep you warm in the colder months until that next album comes along.

The Hyannis Sound loves to generate a high-level performance, whether in a live setting or on a recorded album. Boys of Summer is no exception to this: these singers, with such talents, might just stun a non-a cappella musician who is exposed to this calibre of an a cappella group.

As an opener, This Will Be starts the fireworks that one expects from The Hyannis Sound. The singers' high energy and convincing vocals from top to bottom are a treat, and I'd guess that Natalie Cole would be proud to hear this version.

September by Earth, Wind & Fire is certainly covered a lot in the a cappella arena. The version in this album is mixed with The Hyannis Sound's breakdown riff and it just raises the standard for this song.

The following tracks are a series of spiced up versions of songs from different eras. Sean Switzer proves that the group can take on a musical and turn it into a spectacular a cappella performance with It All Fades Away. Last Dance start off slow and later develops into a faster tempo and if that's not enough, is modulated one semi-tone higher building the song to a grand climax before it ends with a bang. I Wish and My Front Porch Looking In are busy arrangements but that doesn't stop Alex Spears from carrying his soloist torch with sprinkles and glitter.

The Hyannis Sound seems to like making heart-warming versions of songs like Landslide and Hold Back The River, while songs that require grit and scratching chords are given the right applications in the arrangements. I can't complain hearing frequencies that tickle my ears in tracks such as All Night Long, Respect, Turn The Beat Around, and Ain't No Mountain High Enough.

There's only one track (With Or Without You) where pitch correction is too audible, and I cannot seem to unhear it whenever I listen to this song. Other than that, Boys of Summer is a great collection of The Hyannis Sound's annual summer gigs.