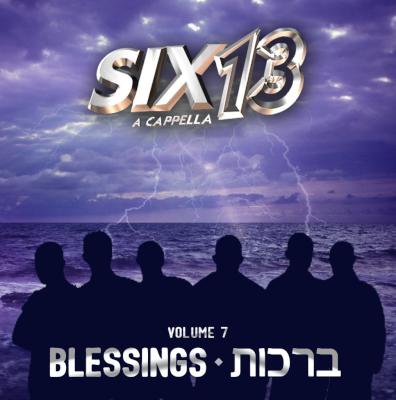 The one thing that perplexes me the most is the inconsistency in sound and production. Blessings is missing what I can only describe as a thickness over the whole album. It never gets to the point that it sounds like completely different groups depending on the track, but it gets awfully close. There are a bunch of people listed as recorders, editors, and mixers which can result in a lot of schütteherein happening with no one master chef.

The first four tracks sound really hollow, almost like there was a definitive choice to record in a way that most replicates the "live" sound: we're just six guys singing and that's all you are going to get. These songs sound like they would fit right at home on the debut Six13 album (okay maybe not A Hamilton Chanukah because that wasn't a gleam in Lin-Manuel Miranda's eye in 2006), and also, for some reason the liner notes say Six13 has eight award-winning albums so that's a little confusing. But starting with Gam Ki Elech, we're gifted with the full-bodied richness that makes Six13, well, Six13.

Even though there is a fun, kitschy zeitgeist with A Hamilton Chanukah — I mean, (former) President Barack Obama gave props for all the world to see this on YouTube — Seder Crew and Watch Me are by far better parodies musically. As I mentioned, Six13 can do some dang good dance music.

Now, I do have my favorites which may become yours as well. Even though Gam Ki Elech sounds like a track belonging on an earlier album, it is glorious to listen to. The spareness of sounds completely works for the Hebrew portion of the song. When the track transitions to the English version of Psalm 23, it's truly as if the heavens open up and rain down blessings on all of the listeners. Coupled with the the light jazz influence in the background, and I sat mouth agape looking at my computer during the first listen. From a completely ridiculous standpoint, Watch Me is absurdity at its most brilliant. I'm too old to Nae-Nae, but I'll be danged if I don't try every time I spin this track. And as I've mentioned in past reviews, Six13 songs that highlight a Middle Eastern sensibility get me every time. Kedushah closes the album in perfect fashion — warm and intimate before becoming electric and epic. To me, it's the most theatrical piece over any of the other tracks on the album — that eleventh-hour song for the lead in the musical of life.

So even though Volume 7: Blessings is a bit of the same old same old, it's still the same Six13, and as Stacy Keach says in the infamous Leslie Uggams video,"It has to be good."

Six13 is nothing if not steeped in tradition. There's the Jewish tradition that permeates its music, of course: Hebrew lyrics draw inspiration (and at times entire passages) from sacred liturgy, and the parodies — a tradition in themselves — use clever lyrics to explain holidays like Shabbat, Passover, and Chanukah. The group also continues the tradition of numbered album titles, this one a reference to the Sheva Brachot ("seven blessings") delivered to the bride and groom at a traditional Jewish wedding.

Indeed, Volume 7: Blessings is a marriage of sorts. On one side we have the tracks sung mostly in Hebrew. Lo Avater is easily the best of these, featuring lovely original lyrics and catchy music by group member Mordy Weinstein and a rap from special guest Nissim Black. The rap is legit, too: I get chills listening to Black spit his intricate rhymes seemingly effortlessly, and his rhythm and timing are virtuosic. Sim Shalom, an original by Mike Boxer based on the Shabbat prayer, is equally catchy, but coming after Lo Avater doesn't do it any favors: the vocals and lyrics don't pack nearly the same punch. It's the kind of song a particularly hip rabbi might introduce to the weekly service to mix things up a bit, and I'd be happy to sing it in my own synagogue. Gam Ki Elech is another highlight, a gorgeous showcase of tight vocal harmony that reminds us that Psalm 23 ("The Lord is my shepherd...") is one tradition that Judaism and Christianity share.

Six13 tends to avoid covers (Mazel tov!), but there are three on this album — which, for some strange reason, are shoved together into a six-minute mega-medley. If Schar Mitzvah had been included as a standalone track, it would have easily garnered a "5" from me, thanks to a bouncy arrangement and another fantastic guest lead vocal from the song's original artist Mordechai Shapiro. Shoved together with two less exciting covers of liturgical texts, the song loses its magic quickly, and the whole ends up being much less than the sum of its parts.

The other half of this marriage is the parodies, for which this group has come to be known in the broader a cappella community. First up is the requisite Hamilton parody, which recasts the story of Chanukah to a medley of songs from Lin-Manuel Miranda's iconic score. The Alexander Hamilton section is the most effective; though the rapping from group members here isn't on par with Black's in Lo Avater, it does show off lyricist Elliot Olshansky's skill with rhythm and rhyme, as well as sly humor:

The five pious and loyal sons of Mattathias stood against bias
Said, you can't deny us, you disagree? Try us!
Our G-d will supply us with strength to win
And then potato latkes we will fry us

I almost wish they had just left it there; "I am not throwing gelt in the pot" (parodying My Shot) just doesn't roll off the tongue in the same way, and without the lyrics in front of me I hear it as "throwing up", which doesn't help matters. Seder Crew, released to YouTube this past March, is an inspired send-up of Ed Sheeran that manages to accurately portray the Passover story and explain the various rituals while also including some great lyrics: rhyming "Maror" (bitter herbs) with "horrors", and "seder" with "Zadie" (grandfather) is particularly inspired.

Of the parodies, my hands-down favorite is Watch Me (Spin / Drey Drey). This track is a prime example of how a successful parody must first be a serious production before it can be funny. The group takes great pains to recreate the hip-hop feel of the original while supplying some great lyrics and internal rhymes of its own ("I light that wick / Lehadlik nay-nay"), and even quoting Hotline Bling and Flicka Da Wrist for good measure. Even the rapping here is better than in A Hamilton Chanukah, though it's got nothing on Lo Avater. The video is equally amazing in its sheer ridiculousness.

Starting Over, also by Boxer, is the odd duck of this release, like the third cousin you didn't know you had but somehow shows up to the wedding anyway. Where the rest of the album is pop and hip-hop, this track is more rooted in '80s power ballads. It's also the only original track in English, an earnest reflection on the process of "rebooting" one's soul at the start of the new year. I love the sentiment, but the lead (Boxer again) doesn't sell it well.

On the whole, this is another solid release from Six13. Here's hoping that tradition continues for many years to come.

Coming in on Volume 7: Blessings, I'm forced to ask one question: where was I for volumes one through six? Many of the fusion-based albums I hear are very closely tied to the languages used and the original music themes. This leads to a bit of auditory separation from the musical intentions of the performance and the expectations of the audience — they aren't able to connect to the music due to a language gap or a misunderstanding of the musical themes. This album doesn't do that. Six13 presents its seventh volume in a way that's fun, enticing, and approachable by all audiences.

One of the types of arrangements I love on this album is the lyrical alterations of popular songs. Consider A Hamilton Chanukah. I never thought I would see a day where Jewish history was presented as a reimagination of a half-rapped biography of Alexander Hamilton. Even better, the rhythmic flow is perfect. My only complaint is due to my long-running dislike of medleys: the transitions are never smooth. This medley is no different but is still enjoyable. There are also songs like Seder Crew and Watch Me (Spin / Drey Drey), which are reimaginations of Ed Sheeran's Shape of You and Silento's Watch Me (Whip / Nae Nae). I'm not going to profess any of these tracks as the next great a cappella creation, but the fusion of a well-performed faithful cover accompanied by the added element of Jewish themes is utterly brilliant.

The other major element of Volume 7: Blessings is the original numbers on this album. Half of the album, including my favorite tracks — Lo Avater and Gam Ki Elech — are written by members of the group. These tracks vary in the style and meaning but are very strong presentations across the board. Lo Avater has an amazing dance groove with an amazing message of rising up and staying strong. Gam Ki Elech is in many ways the exact opposite, using beautifully rich and colorful chords to give thanks. I'm not one to listen to much religious-themed music, but if Six13 is a staple of this style, I may just have to expand the styles of my music library. The group's range as an ensemble while remaining true to themselves as performers with a message is nothing short of impressive.

Overall, my only complaint with this album is that the spread of so many different styles presented among only ten tracks doesn't allow Six13 to fully establish itself stylistically. The lack of cohesion in the album is the anchor preventing it from being as good as it could possibly be. The phrase "a jack of all trades, master of none" comes to mind. I don't know what seems out of character for the group, but this album feels like ten different stories as opposed to ten chapters in a book. I don't have a preference regarding which direction the group should go, nor do I want to influence Six13's hand on that. However, a transition from an annual compilation of favorite tracks to a musically-thematic presentation could go a long way for the overall group identity.

Regardless of a listener's religious beliefs, Volume 7: Blessings is definitely worth a listen. This album has a little bit of everything. The range of emotions on this album spans from laughter-induced happiness to meditative to uplifting. After listening to this release, I know exactly what this music means to Six13 and how it connects to me. Give Volume 7: Blessings a listen and enjoy.