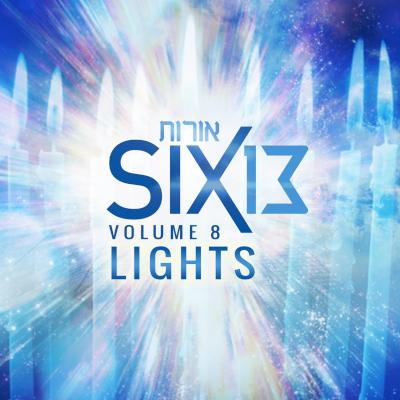 Fifteen years ago I called Six13 "the most accessible, enjoyable and talented Jewish a cappella group I've ever heard". A generation later, Six13 still delivers the goods.

This Jewish a cappella group has pivoted towards a soaring tenor pop since those throaty, rockin' early years. And what was once a mere passing flirtation with Jewish-themed "parodies" has become a torrid love affair with half tucked shirts, mussed hair and smudged lipstick. If titles like A Star Wars Chanukah, Bohemian Chanukah, A Lion King Passover and A Nice Jewish Boy Band Chanukah aren't fair warning that the shmaltz is coming your way, then I don't know what is. But as in all things, execution is the mark of excellence, and Six13 makes good on the promise of these titles. The musicians hit the references and move on when called for and they lay it on thick when that's what listeners are after. In other words, yes you can rock out, a la Jewish Wayne's World to Bohemian Rhapsody. Jewish holiday parody isn't everyone's cup of Manischewitz, but if it's yours, then this (wailing) wall of sound is exactly what the (Jewish) doctor ordered.

Whether it's parody lyrics or completely original songwriting, Volume 8: Lights is a far cry from the cover-centric choices of most a cappella groups, and for that legacy of originality Six13 deserves full credit. Mike Boxer continues as the gifted and guiding producer — writing and arranging the majority of the album and working with the skilled line-up of Eric Dinowitz, Carl Haber, Lior Melnick, Craig Resmovits, Nathaniel Ribner, Josh Sauer, Jacob Spadaro and Mordy Weinstein, many of whom contribute both vocals and music. Add the noteworthy mixing talents of Ed Boyer and Alex Green, and Mastering by Dave Sperandio, and it's easy to see how Six13 keeps the candles lit.

Criticisms are few and offered lightly: the lead voices could be a hair louder and dryer in the mix. The dynamics feel unrelentingly compressed; when combined with the super-tight tuning, it can squeeze the humanity out just a bit. Some "give" somewhere would have been welcome. And finally, some listeners may find it a little jarring to go from goofy spoofs to heartfelt religious texts. (Though in truth, the first few complaints do much to homogenize the tracks, hence largely alleviating the last. So maybe the album is actually flawless ... hmmm...)

Volume 8: Lights is yet another winner for this veteran group, offering up some of Six13's best soloing and energy yet. Staring down two decades of artistry, Six13 remains at the top of a truly niche game.

If you'll allow me a moment of personal reflection, I'm finding it hard to believe that we're at Volume 8 of Six13 albums and this is the first one that I've reviewed for RARB. I say that as an avid follower of the Jewish a cappella scene, as a former Jewish a cappella singer myself, and perhaps most relevantly for this review, someone who is well-acquainted both with Six13 since the group's debut roughly 15 years ago, and with the group's founder, Mike Boxer, even before that —   since his time at Binghamton with Kaskeset and the Crosbys.

But enough of the memory lane reminiscing. Thanks for tolerating that.

This latest edition of Six13's vocal efforts, as has seemingly become the norm with the last few albums, might best be considered as Volume 8a, for the originals and covers, and 8b, for the holiday-themed parodies.

Though you'll note that the numerical scores don't differ all that much, I suggest this dichotomy because there is a distinct difference in feel and satisfaction when it comes to the two categories of material, and the fact that they are co-mingled as they are does not necessarily do the group a service insofar as listening to the album straight through as presented. Then again, does anyone actually do that anymore besides us reviewers?  I wonder.

In any event, the parodies are more easily summarized because, for the most part, they adhere to a consistent, tried-and-true formula. With rare exceptions — the wonderful vocal jazz arrangement fashioned by Boxer for the Cantina theme from Star Wars, most notably — these are extremely straightforward, faithful arrangements of the material being parodied. There are few, if any, surprises and little in the way of musical invention or imagination. The focus of this material is entirely on the new lyrics, mostly borrowed directly from religious texts, cultural terminology, and/or songs that are well-known to those who are familiar with and/or observe the associated holidays, even if not strictly liturgical. The extent and success of the lyrical adaptation varies quite a bit from song to song — Bohemian Chanukah and A Nice Jewish Boy Band Chanukah tackle the same holiday, but the former is far more fulfilling than the latter — but it's also worth noting that in every case (I believe), these parody/medleys were conceived as music videos that are released in advance of the related holiday. Seen in that context, one might understand why the musical element is perhaps simplified — it's about the lyrics, the editing, and the humorous costumes and antics that the guys play out on screen. And having seen the videos, I can confirm they are indeed lots of silly fun and tend to be very popular — in the Jewish community especially — each time one is released. Nevertheless, as a purely aural experience, divorced from wacky visuals, this material is capably-executed, if also maybe a bit heavy on the cheese.

The originals (and one medley of covers) are a more diverse lot stylistically so they're not as easily assessed en masse. The best work is the CARA-winning Adon Olam (Best Folk/World song 2020), with several terrific, virtuosic solos and a wonderfully infectious Yemenite feel and rhythm. Also, Mi Shebeirach, a setting of the prayer recited weekly in many synagogues for the well-being of the armed forces of the State of Israel to the deeply moving tune originally used for El Eretz Tzvi; this was the theme song of the 1977 Israeli Film Mivtza Yonatan (known in English as Operation Thunderbolt) about the 1976 rescue mission in Entebbe. The latter features the well-known synagogue cantor, Chaim Dovid Berson, in a solo performance that is nothing short of magnificent.

Also worthy of note are two original pieces that are clearly very heartfelt: Jacob Spadaro's White Light, which wanders a bit thematically in the last third (and has a bit of a Clocks feel to the arrangement at times), but features his fabulous soaring tenor in a personal journey of searching and hoping, and Boxer's closer Ahavat Chinam, which once again features a solo from Spadaro (as well as Boxer) and an encouraging, wistful prayer of love purely for love's sake.

With that said, perhaps the one common characteristic to the non-parodies is the simplicity in arrangement approach and a lack of development and invention in second and third verses and bridges that would elevate the material from perfectly lovely to truly captivating. Rhythmic hooks are generally established at the outset and are only varied slightly, if at all, as the songs progress and repeat. Soaring power chords abound, where more rhythmic backgrounds would at times provide more texture and depth and build. Nuanced dynamics — other than a solid mezzo-forte and above — are almost non-existent. There is a professional polish and a sheen to everything, thanks to a terrific production team, but a little more musical sophistication and substance would be most welcome, as these guys have style to spare.

White Light might be the best song of 2020. There. I've finished this review. Nothing else really left to say because I've said most of it all before.

No seriously, Six13 is widely known for Chanukah parodies of famous pop songs, movie soundtracks and musicals. There are plenty (almost too many) here on Volume 8: Lights. They are fantastic taken each on its own, but with four included on this album, it gets to be a bit much.

This is year fifteen for listening and loving the music from the men of Six13, so I thought I'd do my own version of a #tbt and look back at my #rarb reviews to see what I've said about the seven(!) albums I've been able to critique:

Six13 (2005 self-titled debut): Most of their songs are traditional lyrics, Friday services or Shabbat morning prayers, set to a mix of contemporary pop, rock and hip-hop music in an innovative blend of reverence and conviction.

Naturally, this is still true, though this is more of a Chanukah/holiday album lyrically.

There's a track called A Nice Jewish Boy Band Chanukah. Like they are living their authentic selves. Though some of them should probably stop calling themselves boys by now.

Zmanim (2011): One would think that after six years of reviewing Six13 albums that I would get over my reluctance and apprehension at describing them as a party band. And yet that trepidation remains, and the fact that they do record some of the most danceable music in the pop idiom makes it all the more difficult. But such is the case with the fourth album in their discography, Zmanim. Many of the tracks are simple groove machines that can make the staunchest prude shake his or her moneymaker with abandon (albeit not wild abandon, but abandon nonetheless).

The opening track Lakol Zman definitely fits this bill, whereas Eliyahu Hanava pulls its introductory bassline from Michael Jackson's Smooth Criminal. Annie, are you okay with dancing to this? And Baruch Hashem might as well be playing in a night club in Ibiza.

You can see by my track scores that the original non-parody medleys are my favorites this time around. All of them are engaging and moving. The production throughout is stellar. Some of the music is overwhelmingly breathtaking. I've never heard the guys sing so freely and with such joy and passion. To call out Spadaro as a vocalist, his melismas in his upper register (specifically on Ahavat Chinam) call to mind all of the great years of uplifting anthems on early American Idol. His palpable energy sparks me to life.

Six13 has the dubious distinction of tying my longest continuously reviewed group during my RARB tenure. Basix is technically first at seven because I didn't review that group's debut album, The Grass. And we didn't review Six13's Volume 6: Thirteen. Keep making beautiful music fellows, and I'll keep listening and loving it.