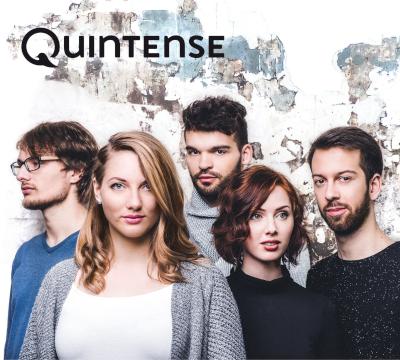 German quintet Quintense is many things: upbeat, fun, and delightfully in sync with one another as the singers travel from style to style. They can just as easily bring a wink and whisper as a deep intensity or power belt. Many of their choices are both catchy and clever. Their biggest issue? Cohesive identity.

After about fifteen listens, this reviewer labeled them a jazz group with a leaning towards contemporary, though that may not be what everyone hears. That definition works well for All About That Bass, My Heart With You, Nacht, and My Favorite Things, but it also makes moments like the dubstep breakdown on Break Free feel awkward despite the worthy execution. It just doesn't fit who these singers seem to be at their heart.

It's a recurrent question in a world where outsiders often hear the instrumentation choice itself as determinative of style, while insiders mark wide chasms between the aca-genres, each with its own distinct history and rules. Of course, whether those rules should be followed or broken is always up for grabs, but listeners nonetheless crave a home base against which to compare a group's variances. And that base must be self-evident from the music, not stated.

The identity question goes beyond musicality and into production choices as well. It's well-handled per song, but not unexpectedly, exhibits some struggle to remain consistent between songs.

This review compares the group Quintense to the world of a cappella, as is our charge at RARB. But there's another comparison to be made. These five student singers from Leipzig have barely had three years to define themselves and in the context of college-age singers they are doing great! They show many signs of knowing what they want to become. Far more signs, in fact, than many other college groups. If this group stays together, it will be a fun one to watch grow as the vocalists pinpoint their sound and become a force to be reckoned with. But even now, there is much to enjoy on Quintense!

There's probably no better descriptor for Quintense than "imaginative". That's because German-based vocal group Quintense has such a knack for beautifully connecting sound, mind, and emotions. I know that this sounds like quite the feat, but the band's newest EP accomplishes just that.

For starters, the group exemplifies vocal wizardry through its detailed and often fun arranging abilities. With the exception of a single track, all the arrangements are done in-house.

Quintense kicks-off with a jazzy and playful take on All About That Bass. This track is a standout, as much of the group's personality shines through with the high-spirited, yet simple nuances that come through in between phrases. The song jumps around in your headphones from ear-to-ear, which fits the style wonderfully. And the soloist fuses sultry with power in the absolute best way.

The fullness of the bass helps to keep Expensive exciting and engaging. In a song full of quick vocal hits, clever editing and production, the foundation remains intact to keep the party from getting too out-of-hand. Expensive boasts multiple buildups that are impressive, and the featured rap breakdown section adds a refreshing and hip element that's attention-grabbing.

My Heart With You is poignant with its dark and heavy tone, complete with emotion that's both raw and heartbreaking. Quintense is a master of pacing with this track — each phrase engulfs the listener, leaving one stunned and breathless. Each chorus is powerful, accomplished in what seems like effortless fashion.

Prepare to be surprised by My Favorite Things, which highlights the EP's most meticulous layering. While the previous tracks are incredibly enjoyable, it is this singular track that showcases the group's most cohesive singing. Each vocal line gets its moment to shine without overshadowing the other. And the cherry on top is the bridge: the listener is treated to the smoothest, most ethereal and fluid moments found anywhere on the project. Everything about this song is incredibly seamless.

Break Free is ambitious with its quick percussive hits, animated harmonies, and rocking lead performance. This track feels the most modern, due in part to the production which includes some distorted bass among other tricks. The track ends up coming across more as a well-produced live performance.

While the EP is phenomenal, it does not go without its criticism. At times, some tracks feel a bit sparse and could use additional layering. There are also moments when percussion hits end abruptly, when they could instead taper off slowly. These are elements that don't quite diminish tracks, but if corrected, could have taken them over the top.

That being said, Quintense is a powerhouse EP that will easily thrill listeners, spurring multiple listens.

One of the first questions that I try to answer when reviewing a new album is a broad but fairly important question: how does this group see itself from a musical standpoint? Whether it's a collegiate group that is putting out that classic "yearbook album" as we call it, or it's a post-collegiate group that keys on a particular style of music or arrangement, I want to see that the group has an idea of its identity. This acknowledgement of who you are allows those that are listening to connect with you and the music that you are putting out. In listening to Quintense, the group clearly has the talent to make it big in the a cappella scene, but the group's identity and direction still need to be flushed out.

Let's start with the tracks that are the highlights of this EP. This cover of The Rescues' My Heart With You is absolutely beautiful from start to finish. You can feel the emotion on each and every word, and the use of the group's vocal dynamics is very good throughout the song — it's just absolutely devastating in the best of ways. My only criticism is the tenor line sticks out a bit in the octave jump in the chorus on the line "Should our fire turn to dark". Granted, it's not an easy jump for anyone, but I wonder if flipping into head voice there would help with the overall blend in the moment. As a big The Sound of Music fan, I love the jazz interpretation of My Favorite Things; it works really well here in the middle of the EP. The solo is passed between each member seamlessly, the overall blend is simply sublime, and there's just so much great ear candy happening throughout the entirety of the track. From the scat solo in the middle to the various dissonant chords, a new "favorite thing" is there to be discovered with every listen of the track. This is easily my favorite track on the record, and one that I will continue to listen to moving forward.

The group also takes a stab at more modern pop music, and it's here that I start to lose the idea of what Quintense is trying to become. The arrangement of Tori Kelly's Expensive does not provide the emotional punch of the original that is needed for the song, and I think it simply comes down to not having enough voices in the group. Entering the final chorus, I was expecting a wall of sound supporting the solo that simply never arrived. And throughout the arrangement, the background just sounds thin. A similar statement can be made about Ariana Grande's Break Free, but I believe that has more to do with the blend/mix of the track over anything else. In the chrouses, I find myself really straining to hear the middle voices over the bass and beatbox, causing the choruses to sound thinner than I think was intended. I do really enjoy the breakdown and the energy going into the final chorus, but ending on the '"Break Free ... Yeah!'" is a little cheesy and takes away from the strong ending.

Moving forward, if Quintense is going to continue showcasing modern pop songs, the group will need to figure out a way to thicken up its arrangements so that the background vocals sound more full. If the group can do this, and continue the success that it's found with tracks like My Favorite Things, then these singers will be on their way to the top of the German charts in no time.