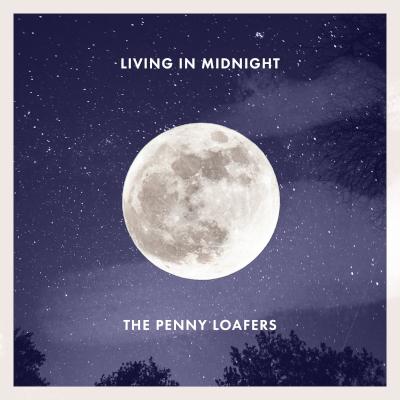 Though it's been over two years since 2015's After the Rain, an album which I felt was a highlight for the Penny Loafers, I maintained reasonably high expectations for 2017's Living in Midnight. Much like After the Rain, Living in Midnight follows a similar sonic path, with the Penny Loafers selecting a roster of reflective, sultry moody numbers. The similarities between the two projects, unfortunately, end here. While Living in Midnight is enjoyable, with a nice blended group sound and aesthetic, I feel this particular venture lacks some of the knockout "5"s necessary to command the listener's attention time after time.

Musically, everything on Living in Midnight sounds pleasing to the ear. The blend of the supporting vocals is really well executed and produced. The bass on Lighthouse is especially well-done. I think what makes me hesitate to place Living in Midnight amongst the "4s" in comparison to its predecessor is that it seems to be missing the climactic moments that push the songs over the edge. The intro song, Midnight, for example, is a nice sounding arrangement, but the dynamics and delivery here don't do quite enough to help the lyrics sound less like notes on a score and more like a performance or interpretation.

The closer, Creeks, is the strongest song on the album. The delivery of pauses and breaks in between phrases is a good example of singing that draws in the listener and commands attention, particularly during the sequence between 2:09 to 2:45.

What the Penny Loafers have going for them is an interesting ear and great taste for selecting songs that complement each other in the context of an album, as opposed to pinching lists straight off the Top 40 charts. With some tightening on the execution and performance side of things, I see no reason why the next outing wouldn't return to true form. My personal recommendations from this album include Lighthouse, Unsteady, and Creeks (Live).

The latest release from the Penny Loafers, Living in Midnight, showcases both moments of strength and weakness from the very beginning. On the one hand, the album is full of strong soloists and beautiful pop ballads that make me sit back in awe of their talent. However, when the group moves away from the slow ballads and tackles something that is more upbeat, the finished product simply does not match the quality of the slower numbers.

The album starts off really strong with the first two tracks in Midnight and Waiting, both arranged by Penny Loafers alumnus Sean Naylor. The former is a very solid track, starting with a sultry and smooth solo from Jillian Karande, and the background supports Karande really well with a strong balance of vocal harmonies and percussive syllables mixed together to drive the track forward. Shifting to Waiting, the track is just gorgeous from the very start. Michael McCurdy delivers a beautiful and simply heartbreaking vocal that may have you on the verge of tears. The only complaint on this one is there are a couple of moments (notably the first verse) where I would like the background vocals to be a tad softer in the mix as they briefly overpower McCurdy. That said, McCurdy's solo alone makes Waiting my favorite track on the album, with the gorgeous background vocals just the icing on the cake.

As we move into the rest of Living in Midnight, some issues arise that were not prevalent at the start. I thought that Mercy was going have the same feel as the previous two tracks, as the arrangement is slowed down in tempo and feel from the original. After the first chorus, the tempo picks up to replicate the original, which is a good arrangement decision that adds some depth and complexity to the track. Soloist Ben Rosenberg does a great job with the solo and navigating tempo change, but the rest of the group does not seem to follow Rosenberg's lead when it comes to energy. With most of the group singing on a "doh" or "oh" vowel, there is not that forward movement that keeps the track driving. Rather, each vowel is sung with no sense of energy or passion behind it, making the second chorus in particular sound flat in parts. The same problem presents itself in Hearts Ain't Gonna Lie, where there is a big disconnect between the energy and passion from Julia Sokoloff and the background vocals. Sokoloff does her best to carry the energy level for everyone, but it affects the solo line when it sounds like she's pushing and straining in certain parts, especially in the choruses. Moving forward, the Penny Loafers need to work on adding more energy into arrangements that have an upbeat tempo. The "oh" vowel has a tendency to just sit there if one is not actively thinking about pushing it forward, so perhaps the group focuses more closely on the vowels and rhythms in its arrangements, making sure to provide the support that the soloist and percussion will need.

To finish, the Penny Loafers include a live version of Creeks. I am always hesitant when I see live tracks on albums, as there is limited production work if the recording is not the best quality, or if there are errors when the group performed it live, such as missed entrances or tuning issues. This shows itself on Creeks — the song is simply much too loud to capture the meaning, to the point where I adjust the volume on my speakers to focus on the recording. There are also moments where the vocals are simply out of tune, and the chords are not locking in like they should. No amount of production work can fix that from a live setting.

Overall, there are good to great moments on this record that I'll listen to for a while. However, there are also a number of mistakes and curious arrangement choices that prevent Living in Midnight from living up to the album that it could be.

When we last heard from the Penny Loafers on After the Rain, I wrote about the group having a deep talent pool and an arranging corps that was only limited by the group's lack of musical direction. With this new presentation from the UPenn crew, Living in Midnight feels very similar in nature.

First, let's look at the album highlights. Much of the solo work on Living in Midnight is fantastic. Overall, the track listings are set up to be arrangement-centric — the soloist is a part of the tapestry of the songs. For example, in the track Unsteady, Michael Paolini gives a very sincere falsetto voicing that directly juxtaposes the powerful belting of the X Ambassadors original. While the soloist remains the focal point by the sheer nature of the performance, the soloist is nestled within many colorful chords rather than being a strong frontman — the lead cannot exist without the arrangement, and vice versa. It's in this way that the ability of the soloists can act as a magnification of the group. Soloists are playing into their strengths and working with the group to give a strong cohesive sound. It's incredibly effective and very impressive.

However, I have many concerns about this cohesive sound. Consider Creeks (Live). Live performances are a very scary thing in recorded a cappella due to no audio safety nets. There is limited tuning to correct pitches and limited mixing to perfectly balance the volumes of the individual parts. The recording is the group in its purest form, and this leads to what is lacking with this album. This track has two dynamics: mezzo-forte and silence. It almost sounds like every member is simply trying to remember the notes. Therefore, much of the other important aspects of the performance — such as tone quality, tuning, and phrasing, are severely lacking. The group takes Bon Iver's very nuanced arrangement, accented by cluster chords and strong dynamic shifts, and makes it into an amorphous conglomeration of notes.

With a track that seems very clearly intended to be a bonus track, it poses the question: which version of the Penny Loafers is real? The "din" sounds from the upper voices in the opening measures of Midnight have that same immature quality that appears later. Hearts Ain't Gonna Lie has the same lack of dynamic range. But the group has proven it can sound incredibly moving and cohesive when it wants to. So until the decision is made, I fear the Penny Loafers may sit in musical purgatory while waiting.