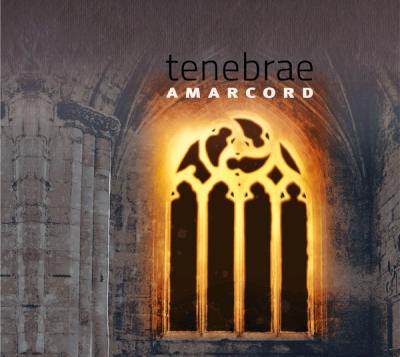 The shadows of amarcord's tenebrae hold a wealth of dissonances. Music from the 14th century to the 21st comes together in a wonder of classical singing. This is amarcord at its best.

Machaut's Kyrie is perhaps the eeriest of the many fantastical compositions sung here, and it is also my favorite. Its alien harmonies seem to spring directly from the distant past, a time capsule from an era when people heard music very differently than they do now. In the liner notes, tenor Robert Pohlers says: "Too much of the music is inexpressible. You have to listen to it." That ethos is most embodied by this track.

It is immediately followed by Sidney Boquiren's Gloria, the newest work in the program. It sounds like a pipe organ incarnate. The opening chords and drones remind me of works by William Mathias, while taking on a distinct flavor of their own. The piece sits perfectly on amarcord's voices – the liner notes reveal it was written expressly for them in 2001 – yet also sounds like it would scale to a larger ensemble, even a symphonic choir. (Note: as previously disclosed, Boquiren and I were friendly acquaintances at Duke in the mid-1990s). The mass cycle then reverts to the 15th century with Ockeghem's Credo. I don't hear a clear musical throughline for the three pieces, but I enjoy each of them in their own right.

Most of the music on tenebrae requires the intimate approach of a small ensemble. The selections from the Moosburger Graduale, a compendium from 1360 I wasn't familar with, serve as guideposts amid the longer works. Ivan Moody's ApokathÃ­losis is a particular standout. Another piece written expressly for the group, it is a reworking of a liturgy from the Orthodox Church. Its musical heritage is clear, even as the composition moves out to explore its own spaces.

The combination of orthodox hymns and modern harmonies invokes John Tavener, and sure enough he appears a few tracks down with The Lamb from 1976. This composition stands a little apart from the program, with lyrics from the poet William Blake instead of the mass ordinary, and its well-known motifs will be immediately familiar to many of today's choral singers.

There are no weak spots on the program. Some of the numbers flow into each other more than others. As a whole, the nearly 80 minutes of music does a good job of capturing what bass Holger Krause described as "consoling music ... very appropriate for finding a balance, a cleansing, perhaps inner peace." There is dissonance here, too — one of the works is by Gesualdo, choral music's original problematic fave — and that spans the human condition as well as anything, I guess.

This release concludes with its title track, composed for the ensemble in 1997 by Marcus Ludwig. The piece tenebrae is a fitting finish to the album, offering beautiful music that ends without closure, inviting the listener to circle back for more.

The group amarcord has long been synonymous with top flight classical a cappella. On tenebrae, amarcord continues this tradition with a generous helping of 21 tracks. The sacred nature of the works forms a type of mass, albeit not of one composer or time period. It's a lovely 25th anniversary!

Fair warning: though all tracks are beautifully sung, this is one of the gentlest collections amarcord has released in some time. It isn't until track six, the dramatic and densely harmonized Gloria, that the listener's attention is truly commanded by the ensemble. Prior to that, the listener leans back and gently imagines these lovely voices, not today, but in a time long ago.

The pure tones of amarcord have never been purer. But where this reviewer heaped praise on the singers for the carefully crafted phrasing on ARMARIUM, this release doesn't quite evoke the same superlative.

And that reveals a dialectic at work. A struggle exists between the accurate reproduction of historical music and the tastes and expectations of the present moment. Can we reprogram ourselves to truly hear as our ancestors did? Perhaps some of us can. Of course, we don't have any thousand year-olds around to ask, so we must make our best, educated guesses as to how the music was meant to sound. Bold dynamics and phrasing are often associated with the Romantic Period (and later), but the modern desire to hear that intensity, to seek every nuance, is inexorable and dare I say universal. The group delivers on its dramatic works, but one can't help but want a little more variation from some of the more gentle and even-paced pieces. Is the desire misplaced in the context of some of the pre-Romantic works? Perhaps. Or perhaps original audiences would have sought no such thing. But would it be a common feeling in listeners today? Likely.

We can only be ourselves in the end. And for classical a cappella lovers, amarcord is always a must. This release is less for the masses and more for the actual masses, but it's still a shining example of what makes amarcord such a stellar ensemble.

First of all, a track list for an album like this does little good unless the composers are listed. So here's the track list again with composers. And I'll also include known dates as an added bonus:

As you can gather, this is a lengthy album (80 minutes), full of a lot of medieval and early Renaissance music, with five modern pieces thrown in for seasoning. The modern pieces all have somewhat of an early style, so it is not a jarring experience moving from ancient to modern and back.

This album continues what we have come to expect from amarcord, with the same lovely blend, spot-on intonation with no hint of autotuning, and soaring high tenor. While outstanding in its own right, however, the album is by its very nature not as accessible as those other recent offerings. It is not "play and forget" background music —  tenebrae demands concentration. Often that concentration is rewarded, as some tracks I was initially "meh" about became favorites after repeated listens. Sometimes it is not, as a few tracks refused to grow on me regardless.

I will mention two highlights. The first is Otche nash, which is The Lord's Prayer in Russian. Gorgeous in its simplicity, it's one of the shorter pieces on the album and has an elegant melody and harmonies. It's probably the most listenable song on the album, in fact I've probably played it twenty times. I even asked my own choir director if we could sing it in the near future.

The other highlight is O Crux splendidior, one of the more ancient songs. I honestly don't know what amarcord has done here, as the piece comes from the Liber Usualis, a 1,900-page book of Gregorian chants which, to my understanding, includes only monophonic chants (only the melody is given and no other parts or chords). However, some uncredited arranger (I'm guessing modern) has added in some polyphony. The piece opens with two singers singing a D3 pedal tone for the entire piece — at least, I assume there are two singers because there's never a break for the entire 4:48, but their voices are essentially indistinguishable. Another singer, or perhaps two, begins the chant melody. Later, a high tenor enters with long sustained notes while the original chant melody continues. Suddenly, just as you think you have a handle on things, another background part appears in the middle; the middle and high background parts often continue with sustained notes but at times move more quickly. The pedal tone, high tenor, and middle part combine to surround the chant with harmony. Mesmerizing. Then the parts drop out, leaving the pedal tone by itself. And the bass drops down a full octave to D2 while someone keeps the D3 pedal tone going. What?! From here to the end, it's three-part polyphony again, but the three parts alternate between being the chant, the middle, and the high tenor, and then the chant, the high tenor, and the low bass. Continued mesmerization. Whoever arranged this, be he/she ancient or modern, is a genius.

Even if you don't agree with me about the genius of this particular piece, odds are some other moments on tenebrae will sing to you like that song does to me. Highly recommended.