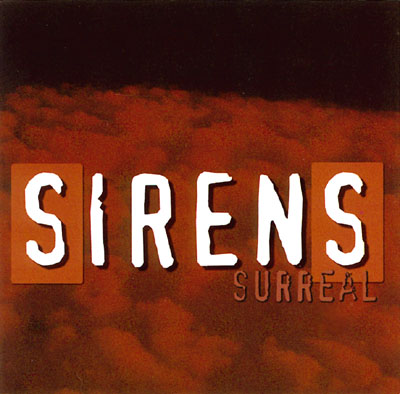 Heartbreaker, the last song on Surreal, the new CD by the USC Sirens, is the only track done by a guest arranger from outside of the group. Gabe Rutman of Off the Beat, spiralmouth, and Gabriel Mann Situation fame arranged it. The best thing that one can say about Surreal is that Heartbreaker blends in seamlessly with the rest of the album. The Sirens' arrangements are right on par with the one done by the hired gun. The opening track, Madonna's Ray of Light, sets the stage for the album with a full-bodied arrangement that is lovingly sprinkled with quotes from Beautiful Stranger.

Although Ray of Light is a strong indicator of the quality of arranging on Surreal, don't think that Surreal is predictable. The Sirens follow up with Sweet Little Angel Eyes, a bouncy old school a cappella number that gives Surreal variety all on its own. This adorable song even features a tap dance solo! (The group actually starts fumbling with the rhythm when the taps come in, but it's hard to fault anything this cute.)

Conventional wisdom says that the biggest challenge singing in women's a cappella is getting around the lack of any bass voices. Listening to Surreal suggests otherwise. There aren't any shockingly low-end alto voices that leap out at you, but the group still has a full sound (the fact that they have some very confident singers in their ranks no doubt contributes to that sound). The real challenge of women's a cappella is arranging for such a large number of sopranos. The only problem on this album (aside from a mechanical performance of Tell Him) is that some of the arrangements have too many soprano voices on the same part. A soprano or two singing above a melody line can be a subtle thing. But when too many voices band together they tend to jump to the foreground of the song and the group suddenly sounds high and thin when it used to sound rich. It's surprising how dramatically the group can jump from sounding so strong to so weak depending on how effectively they use their sopranos.

Conventional wisdom used to say that women couldn't do vocal percussion, that their voices just aren't deep enough for all of those kick-drum sounds. This, as I hope you all know, is a total crock. (In fact, the only real problem with women doing vocal percussion is when in an effort to compensate for this perceived shortcoming they overcompensate and vocalize loud, overbearing fake-bass sounds.) Anybody who still thinks that vocal percussion is just for the boys should listen to the work by Jenny Levy on Surreal. Her warm tones, keen rhythms, and wonderfully earthy bass drums will set the record straight. Jenny Levy is the one of the stars of Surreal. So is Guang Ming Easlon who does most of the arrangements, turns in a nice solo on Special, and provides a fitting descant section on Dreams. Rachel Marotta delivers a commanding solo on High and Dry. The way her surefooted alto voice effortlessly rockets up to the high notes on the chorus is stunning. Shannon Bachmann, whose solo on Ray of Light starts the party right, later returns for another strong performance on Take My Breath Away.

Surreal is more than the sum of its parts. Just as a Dali painting is more than an agglomeration of ambling giraffes and melting clocks, so is this album more than a collection of trebling young women and heart-melting solos. Although some of the tracks are substantially weaker than others, the overall effect is outstanding. Taken altogether, this is probably the best album by an all-female college group I have ever heard.

The production is slick and supportive, the arrangements are typically if not universally interesting, and above all the energy is both well-channeled for each type of track and off the charts. Only rarely do the ladies slip over into the self-indulgent over-singing so awfully endemic in collegiate a cappella. Instead they hit most of the music square on the head; it's a fine line between interpretation and emotionalism, and these singers walk it with aplomb.

Some especially good points — percussion unusually kick-ass for an all-female group (kudos in particular to Jenny Levy); judiciously complex use of backing voices, mostly polyphonic and mimicking instruments, the rare homophony a well-harmonized interlude; good levels throughout. Some disappointing points — a woefully out of place Sweet Little Angel Eyes, and a strangely off-the-mark Girls Just Wanna Have Fun, far too classical for its own good.

This is a great album — great voices, good arrangements, good production. Surreal is a delight.

This album is just fine, in my opinion. But, I'm not actually sure that this exact album couldn't have been released three to five years ago. The only difference here is that it probably cost them a lot less to release this album today than it would have a few years ago. Recording equipment and facilities have become increasingly cheaper and more accessible to college groups with relatively little cash. Unfortunately, college a cappella does not seem to have evolved quite as much. There is really nothing new going on here. You've got a set of twelve cover tunes recorded in a high-quality, non-commercial studio, featuring almost no innovation in any way.

There is some very good female vocal percussion (I'm impressed) and a couple of really good leads. All of the tracks are finely sung with little to no pitch or rhythm issues. But what it lacks is anything interesting. The group as a whole tends to sound a little wimpy, a common problem with all-female groups. They are all very nice singers, and they all can sing their favorite pop tunes.

Basically, there is nothing bad about this album, but there is really nothing that great either. I would consider this a good "yearbook CD", an album used as a record of the people that sang in the Sirens in the 1999-2000 school year. You would probably own a copy of this album if you: 1) have seen the group in concert and wanted a memento, 2) are a friend, 3) are a family member, or 4) a RARB reviewer asked to listen to it. If you are not on this list, I would not recommend picking up a copy of this CD.

If you had talked to me a year ago, I would have told you that all-female groups were far inferior to all-male and mixed groups, and I would have had plenty of good reasons for it, too. Listening to groups such as the USC Sirens and Brandeis' Up The Octave is slowly changing my mind.

Whether it is the sound production, or just the group, I was quite surprised at the range that these women have. There is a nice, rich "bass" line in each song that is so often missing with all-female groups. It provides the foundation on which the rest of the house can be built. Without it, the house crumbles.

There is also great tuning and blend here. The vowel matching in parts not only helps keep everyone on pitch, but it also ensures that no one person sticks out. I was disappointed in some of the syllable choices (including the hated /zhoo-ma/), but on the whole the arrangements were put together in a way that helped this issue, too.

While we're on arrangements, I was skeptical when I first received this album and saw the track list. Tell Him, Girls Just Wanna Have Fun, and Heartbreaker are three songs that can be SO bad when done wrong. These were not the greatest arrangements on the album, but they were all done well enough to not make my ears bleed. In fact, I quite enjoyed them. On the whole, all of the arrangements were tastefully done (besides the afore mentioned syllable choices). Kudos to all the arrangers here.

Not only is this a great example of an all-female album, but a collegiate album too. Any fan of collegiate a cappella should add this album to their collection.

Let's review some a cappella conventional wisdom. It takes several years for a newborn college group to mature past the larval stage. Female groups have trouble recruiting the best voices on campuses with competing co-ed groups. Rock and pop covers always sound thin with only altos to anchor the bass line. Decent vocal percussionists must possess a Y chromosome.

Somebody forgot to tell the USC Sirens about all of this. They recorded a rhythmically rich, full-sounding pop album starring a bevy of well-cast divas just two years after their first rehearsal. I didn't think it was possible to pull together a lineup of voices like these when some of your founding members have yet to graduate. Groups, don't try this at home. You're not going to sound this good.

The arrangements are so active and textured that occasional imperfections in tuning and blend won't detract much for most listeners. Ray of Light is one of the best Madonna covers out there, and credit goes equally to the terrific arrangement and the uncanny impersonation by Shannon Bachmann. Every soloist is worth a listen, but Shannon and Melanie Nyema deserve every minute of their multiple appearances. Three snaps for Jenny Levy, whose assertive beats put to rest the stereotype of wimpy vocal percussion from female groups.

The production is a huge part of why this album is special. Many songs (like Take My Breath Away) have the enveloping sense of mood that only comes with perfect balancing and painstaking cleaning of the tracks. The use of effects on the best songs is nothing short of masterful. They're everywhere, and yet never take over the forefront of the sound.

On the next album, I hope the Sirens are a little more careful with their repertoire choices and tuning. Numbers like Tell Him and What Can I Do are well done, but they're dull compared to the rest of the set, and end up serving as filler between the blockbusters. A little more focus from the sopranos will solve almost every tuning problem.

Surreal is a must-buy for treble pop groups. It is possible to get a multidimensional pop sound — in the studio, anyway — without testosterone, and the Sirens will show you how it's done.

PS: Female collegiate groups hoping to recreate the Surreal sound should note that the album was produced, recorded, mixed, and mastered by someone who is neither female nor collegiate. He's better known as a member of spiralmouth and former director of Off the Beat with a knack for turning everything he touches into CARA gold. He's described himself as an "invisible" advisor to the Sirens, but he is definitely audible. Surreal has many strengths no producer can coax out of a group, most notably those stunning soloists. But it's also the best-produced and best-mixed female CD I've ever heard, and to put it mildly, those qualities do a lot to improve an album.