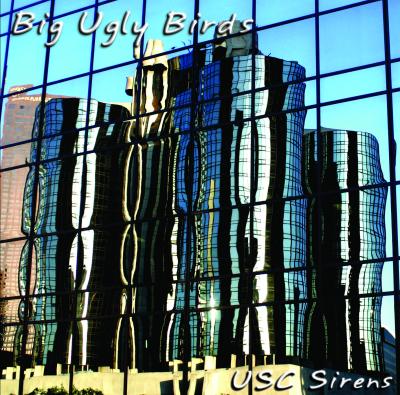 Big Ugly Birds is, as its name suggests, compelling but not always appealing. The Sirens present a big, studio-propelled sound that blasts through driving but unremarkable songs. Little-girl soloists fly on top, soaring on currents of Gwen Stefani, Jonatha Brooke and Kelly Clarkson.

When I first listened to this album, I didn't fall in love with the songs and I didn't really dig the arrangements, but I was prepared to call this an "excellent" album because of its heft and professionalism. The tuning is always good or better, the lead vocals are always representative and the whole disc pulses with energy. My enthusiasm waned over time — none of these songs or interpretations really grabbed me — but it was the solos that pushed me over the edge from "excellent" to "good". The solo Sirens sound like adolescent women who are mostly too old for dress-up but not quite ready for a sultry Vegas run, with an overlay of good-girl Broadway accomplishment. It's a skilled sound, an intentional sound, but not the sound for me.

The percussion also bears mentioning. It's credited as vocal, but it is placed, effected and hammered to where it sounds like a low-end trap set. It wasn't convincing as a vocal performance, and many of the songs (particularly Sunday Morning) also didn't convince me they could have gone far without it. The good side of all this studio polishing is that you truly don't notice the absence of men's voices. The Sirens really do have everything they need. And by the sounds of it, they have enough of it for a live show too. In persion, I bet the Sirens lose some of the detailing but bring even more of the energy to delight their audiences.

Overall, this is a strong album and a great example of the range available to a dedicated and well-resourced a cappella group. I commend the Sirens for their talent and commitment, and I look forward to hearing what comes next.

The all-female USC Sirens' latest album, the inappropriately named Big Ugly Birds (just take a look at the photos in the liner notes) is a great album. Full of energy and high production values, the album is a pleasure to listen to.

This album stands as a testament to the benefits of establishing a long-term relationship with a talented producer. Gabe Mann, who produced this album and has collaborated with the Sirens on several previous projects, seems to slip into this group's sound like an old glove, clearly mixing the album to bring the strengths to the forefront. And conversely, the Sirens tackle the whole album with a singular sound and tonal vision from beginning to end. The main reason this album stands out is the production; it just sounds seamless. The only drawback is that with heavy use of octavization there is an occasional thinness in the mix with no sound between the altos and the bass.

Which isn't to say that the production is the only great thing about this album. These girls can obviously sing as well. With each listen I become more impressed at how unbelievably crisp, clean and unified the backing parts are while never sounding petulant, uninterested, or stylistically inappropriate. After the first half, the repertoire tends toward the bland; I would love to see the next effort be populated with edgier tunes such as Zombie. If I've Fallen In Love is any indication, I think the group is underplaying its R&B and neo-soul abilities.

With all these excellent aspects to the album, the sub-par soloists are a stark disappointment. Without exception the solo performances are average at best. In many cases, soloists try too hard to sound like the original. In others, range issues seem to be a problem; tone is often too nasal or strident. In each case it seems as though the soloist doesn't really have a mastery of the material.

Overall, this is a fine album, and with the exception of solo performance, a stellar album. I'd like to see the Sirens get in the listener's face a little more, but even as is they manage to deliver.

As far as album titles go, Big Ugly Birds is about as stupid as Ding! Fries are Done, Your Mom, and Take a Big Whiff!, and one might presume that this disc's vocals are similarly bland and unimpressive. But no doubt you know this is a Sirens album, and your fears of mediocrity are alleviated. This follow-up to 2004's Tied to the Mast pays pop-rock-R&B homage to such chick-rockers Jonatha Brooke, Toby Lightman, and Joss Stone (along with a collegiate requisite Dave Matthews song). While Big Ugly Birds is an overall great production, all of the songs have the same Sirens' grace affecting arrangement and execution, and therefore lose the singular spark of that "something special" from the original artist. Still, for the most part, the Sirens don't disappoint.

There's a lot of good stuff going on here. Crumbs kicks the album off on a high note with Cathryn Matsuda doing a nearly flawless lead, sensual and emotive as composer Brooke herself. The piece is rather evocative of Tied to the Mast's Glory Box, but that's not to the current song's disadvantage. It's a risky opening to this disc; however, the women pull it off with their edgy, sassy energy and proper application of a cappella knowledge. Crumbs' driving percussion line and synthed voices that run dissonant to the melody open to wide vowel sounds in the chorus. In this song, the Sirens have perfected the use of traditional a cappella syllables like a staccato "ba", sixteenth note "na na na"s, and a legato "oooh" without sounding too old school.

But used elsewhere, old school feels a little too sparse and rigid. Sunday Morning's looped percussion is rigid and perfectly square, taking too much attention away from the sparse background vocals. Only at the bridge does anything vocally interesting happen when the backup adds some color beyond their "whoa"s and "jenna"s. Stay or Leave is too mediocre for a group like this, even with a noble effort on solo by Elia Monte-Brown. Very few groups translate Dave Matthews' rolling guitar plucking into vocals successfully; I'm afraid the Sirens' version isn't one of those achievements. There's too much weight, too much femininity in the "din din"s of the accompaniment. It feels almost like a parody of itself.

And though I really wanted to like it, Devils and Angels didn't do anything for me, especially after first having heard this song on the Sil'hooettes' Tangled. The two just don't even compare. Most notably, the Sirens' arrangement is not quite as energetic, and soloist Lauren Labinger doesn't have the same control over her voice as the Sils' Olivia Bloom does. It's a fun, upbeat number, and provides relief from the slow pieces that precede it, but lacks the sharp, biting tone of the original and the Sils' version and proved to be a disappointment.

Yet the Sirens exit with an impressive finish. Absolutely brilliant on Let Go, Hildie Murray brings the right mix of sweet, airy tone and character of voice to the lead vocals. Where the soprano fails on Stay or Leave, in Let Go it is used aptly and sparingly. Based on the popularity of the "Garden State" soundtrack, I imagine this will be the first of many Let Gos on my reviewing slate, and one that future versions will have to live up to.

In writing this review, I tried my best to limit any kind of comparison to the Sils' Tangled, especially since the Sirens have such a high street cred. However, I couldn't help but feel that this album, even at its best, didn't fare nearly as well as the UVA group's overall effort (though you may remember there were a few duds on Tangled as well). While I awarded both the same overall score, you too may find in the next go-round that the UVA Sil'hooettes are slowly creeping ahead of the Sirens as one of the top collegiate female groups.

There are 3 ways to purchase this or other Sirens CDs:

1. Contact an individual Siren, or come to our shows (we sell them afterwards).

3. Buy any of our CDs online by visiting A-cappella.com.