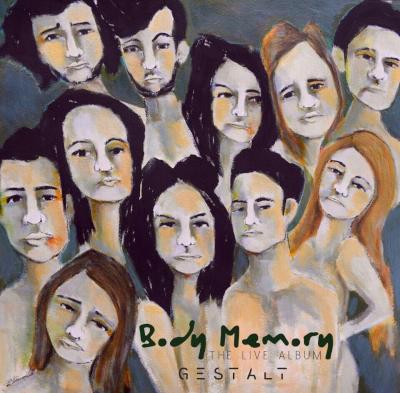 In life, Gestalt is such a polarizing group. There is a slew of uniqueness phrases, trite epithets and don't give a damn finger snap memes that can accompany that statement. But truthfully, you are either all in or all out when it comes to the performances of these Floridians. I fell in love with the group at a semifinal in Athens, GA a few years ago where I told these musicians that they were the future of collegiate a cappella. I stick by that statement. Their recordings don't quell this reality at all. In fact, I think the recordings compel you to take a stand even more than the live performances. You have to invest your whole body and soul into appreciating the type of music that Gestalt is putting out into the world.

And sometimes that commitment is truly worth it and will take you on a sonic experience that you shouldn't let slip by you. The original tracks aren't for everyone to enjoy, and to then green it up in the Gestalt way can make them more alienating, or more captivating, depending on your side of the divide.

I'm trying to imagine what it was like to be at the various venues and events where Gestalt recorded its latest release Body Memory: The live album. It had to be exhilarating. We get a hint of the crowd's reaction on the transition between the English and French versions of This Is My Hand (Ceci Est Ma Main), where it appears they go bats- crazy for about ten seconds. And I was around for the tracks recorded live at the 2018 National A Cappella Convention (tracks 1, 2, 8), but was running around doing who knows what so I wasn't "in the moment". The strongest or most accessible tracks were performed at SoJam XV (tracks 3-5, 7). The aforementioned This Is My Hand (track 6) was recorded at the Faux Paz' 25th anniversary concert. These tracks sound like one long concert as the quality of performance and recording is stellar across the board.

The fact that it is a live album is both a boon and a curse. Any major issues, like the balance on a couple of the tracks, stems from the fact that it's live as the amount of bleed between mics can make it impossible to do the level of nuance that studio recordings provide. And if you've heard Gestalt before, you know this group has a strong propensity for wailing as soloists and in the background as presented on Arisen My Senses and Pray to God especially. And the occasional tuning issue comes from the adrenaline of competing and performing. So yeah, that's some extra work to do. The only baffling misstep is ending the album with Feel as it is the weakest track on the release in terms of tuning and storytelling.

BUT EVERYTHING IS RIGHT WITH THE WORLD BECAUSE EMMA ROBINSON SINGS. Just period. That's a fact. The covers of both versions of My Brightest Diamond's song are genius and my favorite thing I think I've listened to all year. The song is great. The French is great. The arrangement is great. Emma is great.

Body Memory is a bit of a niche album. The general populace is not going to get it. But a fan of art will, and that's where I hope you as a listener join the fray.

When we last heard from Gestalt, I was enamoured with the group's sound, calling it "a fusion of power and technique", but the overall impact of the release was somewhat tarnished due to the album not being fully cohesive. When I received Body Memory, I was hoping it picked up where Gestalt left off. What we are presented with is unique both in its subject material and delivery, but I'm not sure if either of those were wise decisions by this group from the University of Florida. While the subject matter of this album is brilliant and adheres to the group's identity, Gestalt was so often focused on presentation that it often failed to deliver its music effectively.

As an a cappella educator, one of the major lessons I have to teach is effective use of microphones. In a live performance, a microphone is merely a method of amplification and nothing more. Therefore, everything that defines good musicianship should not change when microphones are added. One of the first things that strikes me about this album is the unwillingness of the group to listen to each other. Consider the track Pray to God. The song starts with multiple members in unison. The minor discrepancies in pitch feel like the members are fighting with each other to determine who is in tune. The vocal percussion comes in loud and somewhat muffled. Even worse, the rhythm at the beginning sounds too complex for the percussionist, resulting in minor tongue ties that cause a slightly dragging tempo. As more voices enter, they refuse to immediately work together. It takes about 45 seconds for the group to actually begin delivering a cohesive sound, and it's not until nearly the 1:30 mark that any member offers a dynamic that isn't trying to outdo the others. Somewhere among all the chaos, there are theoretically soloists, but they aren't readily noticeable as the focal point of the number. Every member spends most of the song attempting to prove they are the best performer, but very few convince as talented musicians, and that difference in mentality drags down what could be a very good performance to mediocre at best.

Further, I feel the locations of these recordings also hinder the overall impact of Body Memory. It's a weird statement, but there is some reality to this argument as these tracks were recorded at three different venues. Tracks 1, 2, and 8 were recorded at The National A Cappella Convention (NACC) in Memphis, Tennessee. Tracks 3, 4, 5, and 7 were recorded at SoJam in Durham, North Carolina. And track 6 was recorded at the University of Maryland at a collegiate collaboration concert for Faux Paz's 25th anniversary. This is a great logical move as it's somewhat assumed that the performance at a competition is the group at its peak. However, the arrangements for This Is My Hand and Ceci Est Ma Main are designed to bleed together. Hand ends on a pulsing chord over the lyrics "this is", and Ma Main picks up with the same pulsing chords and the lyrics slowly shift to French. It's a brilliant move. However, due to the recordings being at two different venues, there is a countoff between the two tracks. For two seconds, all of the momentum of the group is completely halted for no good reason because the tracks were recorded entirely independently. There is also a weird break that happens between the first two tracks. The sound of the first track flows entirely into the next, but the change between the numbers is jarring. It's almost like there was another song that existed between the two, but was omitted from this album. From a listener's perspective, these two transitions raise questions.

However, once we get past many of the confusions and missteps, there are still some great moments here. The sound Gestalt produced is absolutely unique. It's dark and complex. This album features songs that span pop, electronic, indie, and folk music, and yet these feel stylistically cohesive. The group sound uses a brilliant counterpoint style filled with rich dark cluster chords that are stunning when executed properly. However, with the constraints of the recording method, I'm now curious what the actual limit for Gestalt is. The talent is here, but if these singers are unable to sound completely unified in a live setting, will a recording studio give the group an opportunity to sit down and give the flawless presentation they are capable of, or will it simply mask the problems? It's a question that the next release by Gestalt may have to answer.

Gestalt is like the cool kid at school that no other student would dare to sit with. The group sings intricate arrangements with impeccable precision that not a lot of a cappella groups could pull off. The singers are an all-star cast at both solo work and backing vocals — they're that cool. They know their stuff, they perform it really well, and they even show that they can sing their repertoire live. But for such a vocally talented group, this live album is such a bummer because it is an a cappella audiophile's pet peeve. Remember back in the '80s when your favorite rock band had a great studio release and then released a live version with a screaming audience in the background? For Body Memory, this is it: we only get the live version.

From a musicality standpoint, Gestalt proves that there are facets of a cappella music that are yet to be uncovered. I'm talking about the avant-garde music that seems to be going around the a cappella scene and I can't wait to hear more of it. I once listened to an entire album of Björk's called Medúlla and this live performance compilation by Gestalt leans toward that path. The musicians who worked to put this together must have genius juices running in their blood stream. Too bad the listening experience is not perfect due to the issues of a live album.

THE BODY kicks off the album with a plethora of ambient sounds which may be difficult to perform if the singers fail to hear the other singers' cues. That one-minute track must have required hours of rehearsal. But the ending key change/resolution doesn't make sense when the second track, Arisen My Senses, shifts the mood to a different space. The next track, O Sun, O Medusa feels like the previous two tracks — just another intro to an imaginary main event. I feel like I have consumed one too many hors d'oeuvres before the main dish at this point, and I can't believe that I'm quite enjoying it. However, the start of another song resulting from a chord resolution at the end gets cut and it feels like torture not knowing what's next — I need closure!

Starting with the fourth track, the rest of the songs feel much more resolved and arc-driven. It's difficult to choose a specific favorite but if I really have to, I would choose the French track Ceci Est Ma Main.

Gestalt's repertoire on this album is a brainchild of some of the greatest a cappella arrangers to date. Believe it or not, Rob Dietz, Elliott von Wendt, and Matt Goldstein's arrangements connect more as a cohesive Gestalt style than their individual geniuses.

There's nothing more to say but rather to reiterate that these songs would have sounded much better as a studio recording than a live recording sans visual. If you enjoy live albums, this is for you. This is creativity at its finest and it's worth a listen.