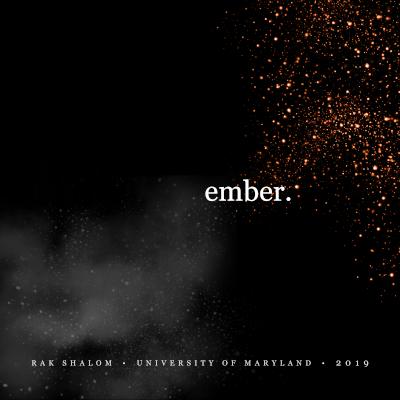 For an album that Rak Shalom would seemingly like us to experience as both smoldering and fiery, it's disappointing to report that Ember rarely brought me above a low simmer.

To the group's credit, these singers have seemingly never met a power ballad they couldn't power-chord into submission. And since such songs arguably require a bit less nuance to render faithfully, the catchy simplicity of Kama Od Efshar and the basic, repeating and building A-B-A-B structure of Ribono do just fine in these hands. There isn't anything terribly interesting going on musically, but if you know the material, you get about what you might expect, and if you don't, you still get an inoffensive, catchy tune presented passionately.

Perhaps more to the group's credit, it does even a bit better with the mashups — something which is unusual for me to say, as I find that a cappella mashups are far too often based on a commonality of chord progressions and a "because we can" mentality, rather than giving much thought to any more conceptual/emotional reasons why the songs should be combined. In truth, I don't even love the individual executions of all of the songs mashed up here by Rak Shalom, but in each of the three instances, there is both a musical and intellectual logic that makes the pairing interesting, and the synthesis of the two songs is handled capably.

With that said, the musical issues that have plagued this group before are in abundant evidence again here, with a particularly frustrating tendency toward vertical, plodding arrangements that too often ignore the specific rhythm, groove and feel called for a particular song (or moment within a song) in favor of chordal fullness and busy-ness. So we get the signature horn lick from the opening Lalechet Ad Hasof, but instead of serving as the rhythmic underpinning of the song, it's smoothed over and rendered virtually meaningless by the drone of pad chords that overwhelm it. In a similar vein, we get something resembling the digitally-manufactured techno beat of Past Lives, but nothing else of meaning is done with the background voices to support and delineate the groove and feel that is needed for that tune. Sometimes it's not even a rhythmic issue so much as a stylistic choice: for example, is the group going for a mellower, smooth-jazz version of I Want You Back? It's tough to tell, as this version has neither the bop of the original nor the inventiveness of a "new" take, and the result instead is thoroughly milquetoast. Ditto for Cosmic Love, which is given a way-too-plaintive and mellow performance here, not helped by more of those big block chords that take the edge off the song's most memorable percussive moments.

It should also be noted that powerhouse solo voices are in very short supply in this incarnation of the group — most troublingly, there is a pervasive pinched, nasality of tone, especially in the upper registers of both the male and female soloists — and it's a particularly pointed deficiency for an album where the repertoire shades towards material originally performed by true powerhouse vocalists. I can't know for sure, but this reality definitely left me wondering if it also explained why several solos, in their most climactic moments, seemed to be mixed (or perhaps hidden) almost "behind" the background voices by expert mixers Ed Boyer and Alex Green. Either way, the group might be lauded for its ambition, but its personnel just isn't currently at the skill level of the material they are choosing to cover here.

Of course, for their devotees, much of the above may well not matter. As collegiate Jewish a cappella groups go, Rak Shalom is among the better ones — no argument there. And as Rak Shalom itself noted in submitting the album to RARB, Ember has received "overwhelming positive feedback" from its fan base. So maybe these singers don't need to change a thing. But the group's liner notes also mention that, per the album's name, the musicians hope you will "rem-ember" them. For that fire to burn eternal, Rak Shalom still has some work to do.

There is something inherently special about a multilingual a cappella project, which University of Maryland's Rak Shalom delivers in its latest album release, Ember. While some of the flaws that plagued the group in its last album remain prevalent, make no mistake: like the phoenix, with Ember, Rak Shalom is on the rise.

My enduring criticisms from High Resolution are anemic solo interpretation, dynamic monotone, and stagnant arranging. While musicality is up, there is still a sense of ownership, personality, and taking a true "lead" missing in the majority of solos. This is not buoyed by the vast majority of arranging, which tends often toward triadic open vowels without a great deal of rhythmic or tonal interest. My kingdom for a voiced consonant and/or a seventh chord! There are great "aha!" moments in I Want You Back (the last chord, especially!), verses of  Death of a Bachelor, and Yalda Ktana, but typically these moments are so fleeting or executed so poorly, they almost feel jarring and out of place because advanced chord writing is an exception rather than the norm.

That said, there are tangible moments of brilliance that could be a sign of fantastic things to come. Avi Eisenstein and Ryan Sevel knock the arrangement out of the park with Fire / Centuries, creating a seamless mash-up with an introduction nothing short of intoxicating. Featuring an exploration of the voice with devices like sliding off pitches and a calculated textural build, this track alone is worth the wait for the dynamics the album sorely needed. Directly following, the energy the group captures in the power ballad Kama Od Efshar, from the uplifting, sparking honesty of soloists Noah Broth and Rachel Robin all the way to the driving percussive line and all-around execution, is stellar. Speaking of Robin, the excellent personality contrast she displays in Believer, especially the pre-chorus, needs to be the new normal for the group in terms of expressivity. Additionally, the vocal prowess and flexibility of Sara Heckelman in Lalechet Ad Hasof is something to behold.

Specifically, if Rak Shalom can fill in those moments of thin, exposed obligatory arranging with genuinely innovative chord and feel choices led by solo voices who lead with personality, they will not be far from excellence. Whether you're an avid Rak Shalom listener or a curious potential new fan, check out Ember.

When last I reviewed Rak Shalom, I questioned the value added by using multiple languages in each track. Within the subgenre of fusion a cappella, there is a strong desire to meld both eastern and western styles. The common result is what feels similar to a four-chord vamp that is unable to effectively capture the mood of either song in the mashup. With Ember, the University of Maryland group has instead opted to separate languages for all but one track. It is a welcome change that really allows the group to showcase both languages.

Starting at the top of the album, Lalechet Ad Hasof is a very solid opening statement. Roni Dalumi penned a strong arrangement that incorporates both fast and slow-moving passages in a way that is interesting to the listener without oversaturating the sound. Over the top of all the backings, Sara Heckelman is absolutely singing her head off for the solo. The only issue I have with this piece is that the group dynamics are very monochromatic. With little difference between soft and loud dynamics, the group could do even more to bring down the volume while keeping the energy. The bridge offers some respite from the onslaught of unrelenting energy, but the group fails to capitalize on it. The result is still good, but just a little more dynamic contrast will bring it to the next level.

As an example of what is possible for Rak Shalom, look no further than Fire / Centuries. This is the first piece I noticed a truly soft dynamic. When the group finally explodes forward, the impact is immediate and attention-grabbing. Arrangers Avi Eisenstein and Ryan Sevel really pulled out all the stops here, taking from both original pieces as well as adding their own thoughts to bridge the gaps. This piece works incredibly well as a mashup, where both songs add to the other, rather than simply being a second set of chords to contend with. The explosion of both in the bridge is a great culmination of everything put together that is pleasing to the ear while still being stylistically interesting.

If there's anything to really make this album better, it's that I just want more. Ember sits in a comfortable range for performing. There are large steps the group could take just by extending beyond this range of comfort. With something as simple as increasing the dynamic range, Rak Shalom would suddenly be able to make those big moments even more impactful or allow the soloist to shine just a little bit brighter. There are so many great things about this album. It's a solid example of a "no problems here" release. A little extra is all it needs for this work to go from good to excellent.