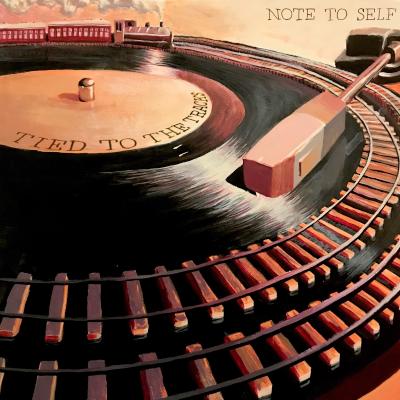 Tied to the Tracks sticks to its strengths, showing Note to Self as a group that can deliver. This EP offers a tight set of mid-tempo pop with strong chord-led arrangements and solid vocal percussion that keep the set list moving.

This Is Gospel is the best of the bunch. Caitlin Begley's solo is a compelling listen, and the rest of the group takes its cue from her energy to deliver a strong overall performance.

I was charmed by Michael Boyle's lead on I Will Follow You Into the Dark, a track that also benefits from a very nice arrangement by Stone Geise. The song has an easy energy to it that makes it fun to listen to, especially after the more aggressive feel of the opening cut.

Matthew Baldwin's layered vocal drumming is a strong presence throughout the album. His work is complemented by Geise's work on the varied rhythms on If I Lose Myself. The percussion here shows an attention to detail that keeps the beat sounding fresh, and not just an anchoring loop. Geise provides the arrangement on this track also, effectively shifting textures so the song doesn't get too repetitive. There's not a lot of tune here, so the most interesting part about it is the climactic switch from full pop barrage to unison and back. A series of smaller transitions keep the rest of the track from getting boring.

Note to Self's web site says the group makes a particular effort to be of service, performing for the broader community as well as on campus. The music presented here makes the case that group members take their duties seriously. These five tracks make the world a little brighter.

Note to Self is not a group I was familiar with prior to hearing its debut EP; according to its web site, this Binghamton University co-ed group has a focus on civic engagement and volunteer opportunities. That's certainly a unique mission, and it's pretty cool that this group of singers is dedicated to doing good things in the world in addition to having fun making music together.

The group's extracurricular activities aren't captured in this recording, though, and there's not a lot to set this group's studio sound apart from other co-ed collegiate groups. The recording in general is crisp and clear, the group has energy, and an EP is an achievable and manageable length for a first recording.

One thing that could have elevated Tied to the Tracks is a greater focus on dynamics. Dangerously jumps to a top volume with its first chorus, less than forty seconds into the track, leaving subsequent choruses (especially the final one) without any room to grow; more of an ebb and flow could have driven the story of the song more compellingly. Other songs similarly ramp up too quickly, making repeated verses and choruses feel a bit repetitive; the medley Weathered Youth meanders a bit, and I Will Follow You Into the Dark feels a bit too slow (although the melody tweaks in the final verse are a lovely surprise).

Even with those issues, Tied to the Tracks is a solid first step for this group. This is a group of highly motivated individuals — with a focus on service, these are students whose extracurricular activity has its own extracurricular activity(!). As such, I wouldn't be surprised if these singers come back swinging with a more focused and more dynamic outing after their next trip to the recording studio. There's promise here, and I look forward to hearing the group deliver on it.

Note to Self wrote on its web site that Tied to the Tracks is "a blend of emotion and aural sophistication, and we hope that it showcases our dynamism, variety, and depth of talent". Well, based on those three hopes ... check, check, and check. Note to Self has done a wonderful job with this debut EP, giving the listener a lot to smile and groove to.

While all of the tracks on the album exhibit these hopes that the group had in various ways, let's dive into one of the tracks in particular. Death Cab for Cutie's I Will Follow You Into the Dark is, for all intents and purposes, a pretty simple song as it's just the vocals from Ben Gibbard and a fairly repetitive guitar line for the group to work with. Therefore, the decisions that arranger Stone Geise had to make to spruce up the song were very important, and I think he did a wonderful job. Slowing the tempo down slightly in the beginning and arranging the background vocal on a soft "ooh" vowel gives the piece a much more somber tone, which fits the message of the song very well. But, Geise doesn't keep the mood there for the whole song. As the second verse comes around, the tone changes to something a bit more optimistic and brighter with an increased dynamic level and the change to the "ahh" vowel in the background vocals, leading to a climax at the final chorus. The vocals that Geise arranged for this piece gives the song a more emotional story that the original didn't quite have, and the entire group tells the story very well — from the basses to the passionate solo delivered by Michael Boyle.

The opening track, Charlie Puth's Dangerously, provides great energy at the start of the EP. Jillian Morley delivers a powerful solo, and her voice blends beautifully with the harmonies in the chorus. I also really like the vocal pauses in the background vocals that arranger Rebecca Colao incorporated into the second verse, as it gives that verse a little bit more punch and suspense. If I had to nitpick the arrangement, it would be some of the background vowel/consonant choices. In the chorus, the eighth note ascending "ooh"s (such as after "I love you dangerously" and "more than the air that I breathe") are beautifully sung, but I would have preferred it on the "ee" vowel that Puth sings in his original. Not only does it make sense from a vowel perspective, as the words that he sings right before that line all end/are held on an "ee" vowel (dangerously, breathe, me), but I also think that the "ee" vowel cuts through the chorus better and gives the section a bit more of an edge and energy that the song calls for. The "ooh" vowel is almost too "pretty" for that particular section. The other track that stands out for me is the final track on the album, which is a mashup of Jack Garratt's Weathered and Daughter's Youth. I'm not going to lie — it took me a couple of listens before I realized these were actually two different songs. That's how well co-arrangers Geise and Liam Coen wove the two songs together. And just like they mentioned as one of their hopes, their attention to dynamics in this piece is apparent — great swells in the bridge amongst the background vocals, leading to the ultimate height of the song being reached on that final chorus.

So, if you haven't checked out Note to Self yet, be sure to take a listen to Tied to the Tracks as soon as you can.

Tied to the Tracks streams on Spotify.