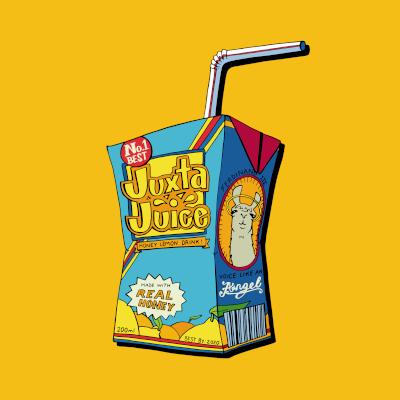 So the guys of Juxtaposition from Virginia Tech didn't call their newest album "Real Deal" as I had hoped last year in my review of their EP Faking It, but they deliver a real deal album with their latest recording Juxta Juice. I like the album a lot, only finding fault in a couple of categories that are entirely reflective of my tastes and not the quality of the music. It is a really good album to have in your collection.

I've spoken often of the "juxtasound" and let's just say that it has evolved in a new direction in a short amount of time. The guys are heavily influenced by R&B and jazz music this go round — think of a combination Cadence/Duwende sound. Oh look, they end the album with Cadence alum Dylan Bell's I Wish arrangement. There is a silky swagger that they are putting forward now. The overall musicianship is like no other Juxtaposition album I've heard in the past 20ish years. The crispness of the background vocals in the opening track Particular Taste made me take a grand pause. A grand pause, because it was both out of the blue and absolutely mesmerizing. At one point it seems like there are four competing lyrical lines going on in the song, and the interplay is a crowning achievement. I mean it could have been the masterful production work by James Gammon, but I'm thinking that the raw track had to be pretty spot on to get that level of intricacy.

But the sound is also the major issue that I'm having with fully embracing the album. Everything is bright and buzzy with a lot of air in the upper voices. That stylistic choice is very effective in the bass, as the thumping propels each track in a novel yet foundational way. But after a while, it's annoying in the uppers because it is so artificial sounding and I figured that it just wasn't my particular taste to be used on an entire album.

I'm at conflict with the other "fault" that I'm having with the album but is in conjunction with my previous statement: I expect collegiate groups to have a lot more variety in musical styles than a professional group that is rooted in a particular genre. Is that fair? I don't know, but for the most part this album sounds like one long 30-minute track. Yahoo for consistency but yawn for the static-ness. The buzzy airy quality just adds to the muddiness in an ironic sense. Try should be a highlight of the album with its richness and earnest quality, but it's buried under a sameness of sound that makes it difficult to appreciate fully. It's like trying to listen to three Mayer Hawthorne albums in a row.

The soloists, though, are the true freaking highlights of this album. Baller is appropriate yet derivative, but I am not sure how to heap the platitudes across a whole swath of performers who are all sitting deep in the pocket of grooviness than by saying it like that. Standouts for me are Andrew Edgar, Henry Mason, and James Gilchrist. Edgar is magnificent without being overbearing on Particular Taste and Mason shines as part of the fantastic duet on Still in Love. Gilchrist just made me forget about all my problems for three minutes on Vices.

No witty bon mots to end this review. Juxtaposition has delivered a great new album with strong growth in musicianship.

Juxta's recipe to squeeze the juice: stay in a tight R&B realm; have leads who see "flourish" as a mere suggestion; and put confident beatboxers on prominent display. If these individual components excite you, Juxta Juice will go down smooth.

Without a strong set set of drummers, an atmospheric R&B tracklist from start to finish just won't be convincing. In what's atypical for a collegiate group, Juxtaposition uses four percussionists, all of whom "play" their instruments with musicality and expression. In addition to being impressive, it's just good fun. Kudos to the production team for keeping these guys human but polished on their patterns.

The other anchor on these songs is of course the leads, and the Juxtaposition roster of soloists is deep with technical precision. Lots of riffs, lots of register shifts, splashes of falsetto, huge song ranges, all child's play here. Particular standouts include Dijuan Gilbert, who has so much talent and pure presence on This City that he's created a legit, "Excuse me, I've arrived" moment for the group, and Henry Mason out front for I Wish. Listen, there's a million and a half different spins on Stevie's classic, but there's only one Henry Mason wailing like Stevie stepped inside his soul and took control.

The two lower-scoring tracks here, Karma and Try, went down a tick because of the backgrounds. Queue up the start of Karma; the backs are sitting heavily on their notes, without much forward drive for this intro and throughout both of these tunes. Even if you've got a supporting part, you certainly can't phone it in. When you do, suddenly you have a spotlight you didn't intend. And if your part isn't too inspired in the first place, be the one who suggests a change.

Juxtaposition has a core group sound, and Juxta Juice is a good representation of this group's talents.

When last I wrote about Juxtaposition in my review of Faking It, I noted that there are flashes of brilliance, but the album at times felt very much like college students working just hard enough to pass, but not to excel. Juxta Juice is a return to the level of excellence that the men of Virginia Tech have been known for. There are so many different ways to describe this album, and they're all similar to your favorite juice: it's crisp, clean, smooth, sweet, and free of pulp.

The first few tracks show this very quickly. Particular Taste is a great presentation of the Shawn Mendes original. Andrew Edgar's solo is incredibly strong while remaining playful, especially in the upper registers. This City is a great ballad headlined by Dijuan Gilbert, who does a great job of conveying a sense of longing throughout the number. However, for all the great little moments that exist in these first few songs, there is little that goes above and beyond. There are no flashes of brilliant arranging to give more to the song's story past the soloist's lyrics. There are few moments of strongly varying dynamics to give the song direction. These songs are solid, but there is so much more that the group could do to go above and beyond.

The middle of the album is where the group really begins to shine. I'm in love with Vices. I can't help but move as I listen to this track. Bryson Baumgartel's arrangement is filled with smooth and colorful chords throughout the track while offering just enough flashy moments to keep the listener engaged. James Gilchrist's voice is flawless in the vocals and gives a phenomenal balance of dreamlike falsetto and control during vocal runs. Three tracks later, I'm so Tired has the same feel of dance-inspiring R&B grooves. Baumgartel's arranging is again on display with some really well-executed chords in the background and excellent choices between sustained and rhythmic patterns. Nathan Rusli is given an amazing foundation to crush this solo, and he does so. I'm honestly impressed with the raw solo talents across the group in this album.

By the end of the album, the group's sound has been put on such a high pedestal that the final track feels a bit thin by comparison. I Wish is a classic that I have seen so many groups do. However, I still was thrown for a loop by the old spiritual Dem Bones thrown in the middle of the second verse. This comical jazzy funk gives me pause, as it's just so different from the R&B vibe that has been created. Even worse, it's the last song of the album, and so I'm left with a bit of an odd taste in my mouth. It's well-performed, but it's the equivalent of blowing a raspberry at the listener for becoming accustomed to the sound of the group.

Juxta Juice highlights that there are so many different facets to the a cappella world. There are groups that are high energy, there are groups that are dark and edgy. However, this album is the peaceful kind of album you want to listen to while watching the world go by. My only gripe is that it could add a little more to give direction to the songs. There is an abundance of strong soloists within the group. However, little additions in the backgrounds could take some of the focus off the soloists to allow them to shine even more. This album is a reminder of why Juxtaposition is a well-known group in the collegiate a cappella world, and I can't wait to hear what this group puts out next.