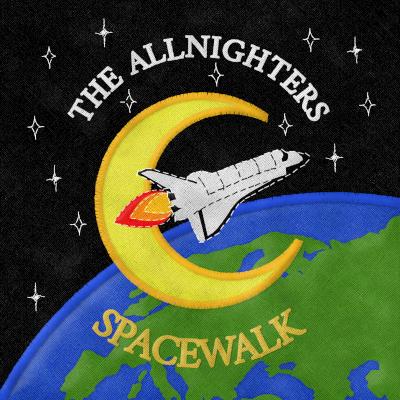 There's no substitute for earnest and captivating conviction, which is an element that the AllNighters exhibit in excess on SPACEWALK. And this is not just something you find only on the tracks in which the volume is kicked up to a 10, but it's also displayed during the group's more intimate selections. Pair this authenticity with eight uniquely crafted tracks, and you're in for an exciting journey through music.

While most of the tracks featured on SPACEWALK fall into the alternative or pop realm, they all have the distinction of being an AllNighters' cover. So, nothing is off-limits in terms of what is ultimately delivered.

This translates into an extra level of oomph or the way the notes are attacked on Silvertongue. The soulful inflections or staggering amount of tenderness infused into Bring It On Home to Me. Or the bewitching way the group can present a story through song on The Only Thing.

The AllNighters consistently find ways to fashion a song into their liking and then ensure that it is presented with maximum appeal.

The group's best moments arrive when they take on the more popular tracks on SPACEWALK, causing them to dig deep to separate themselves from the original. For instance, the AllNighters' rendition of Circus, which just happens to be a cover of a cover, is simply masterful. Jazz, pop, and soul all collide into one in this complex arrangement of quick rhythms, immaculate chords, and twist after twist. Just listening to the multiple breakdowns and incredible scatting gives me goosebumps.

Next, the group takes on the King of Pop in its cover of Man in the Mirror, which is no easy feat. Yet, the AllNighters pull it off with an arrangement that starts off laid back before finding its momentum halfway through, culminating in some of the album's best harmonies and one of the most riveting solos featured.

And the good times continue to roll as the project closes with Lionel Richie's All Night Long. The layering just sounds and feels like wonderful poetry that captures you and seeps down into your core. The collective effort by the group in delivering such a cohesive performance is astounding. While it sounds great, the non-singing aspects, such as the vocal and body percussion, are truly mesmerizing!

The shortcomings of SPACEWALK, while minor, can't go unacknowledged. A few of the early tracks could use a bit more fine-tuning in terms of production when you compare them to the later tracks, whether it be vocals or percussion. The singing just feels cleaner as the listener progresses through the release. And as much as I appreciate the project's overall energy, I still feel as if the AllNighters are capable of giving the listener more.

These minor critiques should in no way take away from how creative and aurally pleasing SPACEWALK is as a whole. You simply cannot deny the vocal magic the AllNighters are capable of bringing.

When last I wrote about the AllNighters, I commented that the group had some very bright and shining moments but felt very restrained for most of the album Night Shift. As I listened to SPACEWALK, I hoped to see the group pick up where it left off. Unfortunately, this isn't the case. While this album has some great song selections and stylistic arranging choices, much of this release is hindered by the group's inability to fully embrace the music and fully deliver the energy of the pieces.

Silvertongue is a very interesting opening to this album. On the surface, I want to love this song. The piece starts off with the feel of a sleazy smoke-filled back room. Lucas Polack has a great tone for this piece. However, once the track gets going, the track just starts feeling misplaced. Eventually, the sound is consistently trying to both fill the musical space with as many rhythmic patterns as possible while trying to utilize empty space to keep that sleazy feeling. Those concepts are entirely contradictory, which is why I have such concern. This piece needs to be slowed in tempo to allow the group to sit back on the beat and let the group establish a style for the piece. Otherwise, the group is singing a different energy than the soloist, and it leaves a bad taste in my mouth.

Once we start approaching the middle of the album, there are some great moments. Bring It On Home to Me is a fresh face on a modern classic. Vivek Gopalakrishnan does a tremendous job capturing the crooning vibe of Sam Cooke. Small changes are made between the original and this cover, but the sound is so smooth and I love it. The Night We Met is a different emotion, but it's captured beautifully. I have to give credit to arrangers Lucas Polack and Vivek Gopalakrishnan for these two numbers. These are the purest arrangements of this album. There are complex and colorful chords present when the backgrounds are the focal point and simple backing to allow the soloists to tell their stories. These two pieces are strong; they could do even more to emote and let the arrangers explore their own styles, but they set the foundation for the storytelling ability of the group.

When we get near the end of the album, we start looking at the group trying to show off. Circus, which is based off the version from the Swedish group Dirty Loops, is the high-octane barn burner I have been waiting for from this album. There are some great chords and one absolutely jaw-dropping scat solo in the middle of the piece. However, for all the skill that is here, the background feels restrained and not willing to fully deliver the energy this piece calls for. The even more ambitious piece is an a cappella interpretation of Jacob Collier's cover of All Night Long. I have to give arranger Tim Jones credit for even daring to attempt to pen this arrangement. There are some unapologetically complex rhythms and some great colorful chords. However, I have one major complaint. For lyrics that claim to be about partying all night long, this recording never seems to capture that level of exuberance. For all the great moments this song has, it doesn't give the sense of finality this album needs. The group made a valiant effort on these two pieces, but didn't accomplish what it needed to. These two songs could have highlighted the group's technical skill, but instead they show a group that sounds good, but doesn't have a good sense of what it is able to simply perform versus what it could excel at performing.

If there's a thought regarding this album, it's this: who are the AllNighters? There are hints at a group with unrelenting energy that might require taking a sedative before trying anything that needs to sound laid back. On the other hand, there are some very sincere and touching emotional moments. However, I'm seeing and hearing tracks from a group that is trying very hard to establish a high-level jazz presence in its sound. I can't help but want to watch the group succeed at any of these styles. Until they pick one, though, the AllNighters might be stuck middling in all three.

The AllNighters' puzzling creative decisions in their latest album, SPACEWALK, puts on display the importance of arranging and appropriate group sound to successful a cappella adaptation. Even with Liquid 5th's polished production, artistic gambles and misses mean that the AllNighters' vocal and creative talents are not always properly showcased.

Perhaps the most obvious example is the group's Latin jazz fusion interpretation of Britney Spears' Circus that sounds as if a tenor Gloria Estefan fronted the Swingle Singers, complete with a bebop scat solo. Arranger Vivek Gopalakrishnan makes good use of the background vocals in dense, syncopated chords that allow the rhythmic parts to shine (although the vp and bass don't always lock into place). Nonetheless, I find myself oscillating with each listen whether I am intrigued or deterred by the track as a whole because I don't understand the expressive value behind covering a pop dance hit like a Latin uptempo standard. As I wrote when reviewing Silvertongue, the lead single from the album, "It has become something of a cliché for a cappella groups to reinterpret a song into a new genre. In its best moments, this choice can have a revelatory effect for the listener, especially when a ho-hum pop song suddenly stands out. But when the opposite occurs ... they flatten a once interesting song."

These arranging misses also occur on reduced scales. Baritone Will McBride's smooth solo is on full display in Man in the Mirror, not only because of his powerful instrument. Arranger Tim Jones omits the original's back-up vocal harmonies in favor of largely boring background lines. Despite McBride's dulcet tones, the track feels empty as a result. Similarly, when listening to the group's cover of Jacob Collier's Grammy-winning arrangement of Lionel Richie's All Night Long, I miss the dense texture—especially in the extremely simplified vp part—and the extensive improvisation section that, as they illustrate in Circus, some members of the group could handle. Though I appreciate the group condensing Collier's long chart down to five minutes, why exclude opportunities to show off your group's talents?

This unevenness extends beyond arrangements to the group's blend. The doo-wop stylings in Bring It On Home to Me hit the blend bullseye: a well-balanced, consistent, bright tone across the ensemble. For most of The Only Thing, the group and soloist Sanjay Kottapalli skillfully combine melancholy with rhythmic vitality. But in other songs, their tenors' falsetto-heavy tone fails to mesh with the rest of the ensemble, a dissonance that results in the baritones overpowering in the sleepy The Night We Met and the tenors sticking out from the lower parts' more appropriate, chesty timbres in All the Pretty Girls.

Even with these critiques, the AllNighters mainly get fundamentals right: they tune well, have strong soloists, and display stylistic flexibility. As the more solid tracks demonstrate, if the group can focus its artistic intentions and maintain a cohesive sound, its creative risks could pay off.