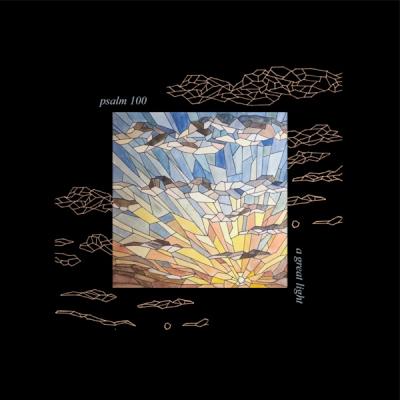 The last four tracks of A Great Light offer enough diversity, passion, and compelling parts to make a good standalone EP for Psalm 100. When taken as a whole, however, A Great Light needs more arrangement editing and rehearsal time to illuminate a path for listeners.

Nearly all of my thoughts for the group's album release Remain apply to A Great Light, starting with the very urgent need for more sophisticated arrangements. In some cases, the arrangements mitigate very clear strengths, such as the bluegrass-infused vibe that charming soloist Liz Yardley brings to Coloring Outside the Lines; abrasive syllables just don't complement her distinct style. Psalm 100 should look at arrangements as group projects in rehearsals; try out different syllables, add new lines, and switch singers to new parts as needed until you've got something irresistible. See yourself as a vocal band: jam, then solidify when you hit on something great. Also, intros and endings are the most exposed places and should be as thoughtful as possible. The heartsoul emotion of Evergreen deserves something more nuanced and instrumental than a generic "wah wah wah dah" ending. Listen to the advanced technique soloist Tori Dunlap offers in her well-supported upper register on this piece. How can you add a bow to her fine work?

Speaking of the backgrounds, they are often too loud and too forward in the mix, in some cases covering up the leads entirely (parts of There Came a Light). While it's absolutely true that the backgrounds need plenty of ownership and presence, the lines can't merge into one, leaving the listener to strain for lyrics and the lead's anchoring voice.

And oh, we want to hear these leads loud and clear, because a few seem to defy what's possible in range and delivery. Lead Molly Cummings for Breathin' has such a sassy loveable spark. And there are such incredible harmonies top to bottom, too — some of these singers should really start their own indie projects together after college. I am floored at the harmonies Olivia Davis creates on Still Rolling Stones.

Lastly, a tighter tracklist would go a long way, especially when the group also has its own "brand". I'm particularly mystified to hear a serviceable but not special rendition of country-pop Speechless on this cut. If Psalm 100 is going to move away from a spiritual tilt, it should come with good reason.

There's a lot of content on A Great Light — chances are high you'll like something. Here's hoping the group raises its arrangement standards for the next release.

If there's one thing I've come to expect from a Psalm 100 album, it's that the group consistently delivers a stirring and cohesive collective sound. With A Great Light, the group's latest album, this trend continues to hold true. The project takes a slight departure from previous albums by including a few more pop-focused tracks, but this only solidifies the idea that Psalm 100 can simply flat out sing!

Some of the best moments on A Great Light are when the singers perform in total harmony with each other, serving up a stunning unified sound. The coordinated effort of singing presented on Rescue is phenomenal as the backing vocals seamlessly match every aspect of the lead's delivery, from diction to dynamics to overall feel. There Came a Light demonstrates how vital it is for every vocalist to be on the same page when it comes to energy. Each member shows up, which strengthens the song's forward momentum.

And if you need further proof of how skilled Psalm 100 is, give the track Relent a listen. The group's ability to smoothly move between chords is hypnotizing.

While nearly everything presented on A Great Light is sublime, there are three particular tracks that will wow you!

The first being Still Rolling Stones, which takes the group's remarkable ability to tap into the spiritual side of any track they're singing and elevate it by a factor of 10. Everything about this track is larger than life, from the pulsating vocal energy, epic and cinematic sound, and the vocal prowess of the soloist and backing group. Psalm 100 pushes itself to the limits creatively and it pays off in dividends.

The second standout is Coloring Outside the Lines. There are some tracks which are simply a joy to listen to and this is easily one of them. The song has that feel-good energy; it's playful and loaded with many minor nuances which culminate into a solid performance. Not to mention, the lightness in the lead's vocals are capable of brightening up the darkest day.

Lastly, the biggest surprise of the album is the group's exceptional cover of Ariana Grande's Breathin'. Nothing else on the album sounds like this track. The arrangement is progressive and explores so much through its vocal experimentations and modern percussion. Furthermore, the group puts forth a powerhouse collection of female vocalists, from the lead to those singing the incredible harmonies.

A Great Light unfortunately has a few moments that are less than excellent. There are tracks that for me, struggle artistically, such as the direction of Evergreen. When you look at the technical aspects of a song like Speechless, the group delivers, but the arrangement could use some polishing. These small moments really stand out when put next to other stellar tracks.

As mentioned, A Great Light continues to build on Psalm 100's impressive resume of stirring music that rouses the soul. You'll find yourself hooked on more than just a few of the tracks offered.

Psalm 100's newest full-length album, A Great Light, is rife with musical moments to salivate over: freshly-arranged sections in songs (like in the middle of Evergreen), the occasional ear-popping chord substitution in songs like Evergreen and Rescue, and a delightfully powerful background vocal part in Still Rolling Stones. And, subjectively, the group's song selection choices are excellent. But, on the heels (pun intended) of a release that starkly divided our reviewers, the UNC Chapel Hill group delivers an album that remains curiously uneven.

There are certainly bright spots, but scattered: Heartburn Song sets a fun, buoyant tone and a sort of faux-live presence that doesn't rely too heavily on studio effects. But the song itself runs out of steam by the end with a near-transcription of the repetitive ending breakdown section without adding anything musically, dynamically, or otherwise interesting. And while Tori Dunlap's solo deftly taps into Gracie Lawrence's soul-pop flair, her counterpart fails to break the mold by remaining exclusively in the lower octave, effectively sapping the song of some of its energy potential. Additionally, the aforementioned Rescue and Still Rolling Stones are stumped in their potential with missed dynamic opportunities, especially where longer notes and phrases are concerned.

The main issue is that Psalm 100 doesn't follow through on these moments in any individual track consistently enough to build momentum. Combined with that, a dearth of dynamics, both macro (within the song) and micro (within individual phrases); solo interpretation that does not take significant ownership of covered songs; and a tendency toward repetitive, transcription-like arrangement choices, all make it difficult for listeners to remain engaged through entire tracks. Evergreen is a perfect example: an ear-catching middle section is bookended by monochromatic passages that fail to transcend their original material in any interpretive fashion. The middle tracks suffer from this, especially, making repeat listenability difficult.

The flashes of brilliance from this group are promising and A Great Light on the whole is quite tuneful, but until it can take consistent steps forward in solo and arrangement interpretation, Psalm 100 is liable to remain in this middle ground of latent potential.

A Great Light streams on Spotify.