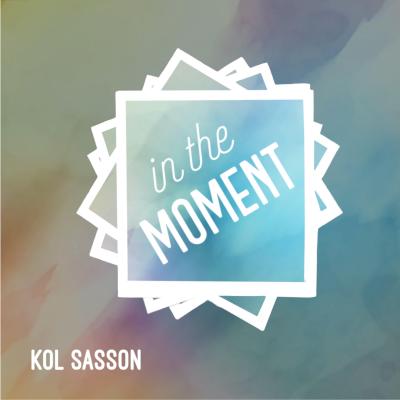 Kol Sasson's newest album, In the Moment, follows the group's usual playbook when it comes to new releases, with roughly half of the tracks being sung in English (primarily pop songs) and the other half in Hebrew. And the variety of songs is quite vast — just among the English tracks, Kol Sasson covers songs from Dolly Parton, Charlie Puth, Troye Sivan, and Sam Smith (just to mention a few). With those being many of my favorite artists, I was quite excited to give this album a listen. But as I listened, the excitement started to melt away, and I was left with a feeling of disappointment. That disappointment didn't necessarily come from the music itself, although there were a few questionable moments that I'll mention, but more from the lack of energy and purpose throughout.

Dolly Parton's Jolene opens In the Moment. It's an absolute classic, written from the point of view of a woman who is begging Jolene not to take her man. There's pain, desperation, and a sense of urgency that needs to be emotionally conveyed from the soloist in order for the piece to truly hit home. But Kol Sasson doesn't come out with anything close to that intense set of emotions — it just sounds like the group is singing notes on the page. There are some nice moments throughout the song, particularly the blending among the three soloists, but overall it just feels emotionally flat. This isn't a great way to start an album in general — you want your first song to hit the listener in a way that makes them excited to listen to the rest of your album. But, especially with Jolene, the emotional connection really needs to be there, and this was a missed opportunity.

The lack of emotive connectivity to the pieces is a trend in the background vocals throughout the album, and I think a large part lies in how those parts are arranged. There's a lot of either sustained whole notes or steady quarter notes across a number of the tracks. So, even on tracks like Brother or Lama Li where you have a lot of emotion coming from the soloist or an intricate vocal percussion performance, it's offset by the vocal backgrounds and cancels out the good things that are happening in those parts.

Dynamic contrast is also an issue across a number of tracks. Taking Youth as an example, the arrangement opens without any vocal percussion. I think the intention may have been to start with a more stripped-down opening to the track, and then gradually build with emotion and intensity as the song goes along and the vp is added. If that was the intention, that plan wasn't executed properly. The background vocals are much too loud in the beginning, giving them nowhere to go once the vp kicks in. And as the background vocals try to grow, they're in competition with both the vp and soloist Sammy Turk Tolub as to who's going to be the loudest, and it takes away from the performance as a whole. Kol Sasson does try to come back down a little bit in the bridge (on the line "what if we both wake up / realize that we messed up"), but then returns to that original dynamic level by the last chorus. I would have started much softer in the beginning (piano or even pianissimo), with gradual growth throughout the verses and choruses leading up to that part in the bridge. The idea to drop in volume was the right idea, but they needed to come down a little bit further to make the contrast in the final chorus that much more obvious. A dynamic arc within the song not only helps tell the story, but it allows the soloist to have a bit more freedom and be the focal point that they should be. I think that Tolub makes some really good and interesting choices with the solo line, but they are a bit overshadowed by the lack of dynamics.

I only highlighted a couple of the pieces, but these were by no means the only times that this happened. And it's quite unfortunate, because it takes away from some of the good things that are happening. For the next release, I really hope that Kol Sasson spends the time to focus on the overall musicality of all of the pieces that it chooses to record. Only then will the group's work be viewed as more than just the standard "yearbook album".

The biggest challenge for In the Moment is the lack of energy and emotion.

Consider just the opening track, Jolene. The lyrics tell the story of a woman pleading to keep her man. However, the energy of this song never has any hint of pleading. Lead vocalists Molly Azrael, Hannah Wandersman, and Allyson Sweiderk are doing their best to keep that sense of urgency, but the backgrounds have to be in sync with the leads. The background for this track is a rhythmic pattern that never seems to drive anywhere. If the lyrics are moving to an emphatic plea, then the backgrounds should be matching the highlights of the argument. The rhythms are constant, and it mutes any impact the soloists could have. The group needs to be in lock step to make this song work, and right now it sounds like they're walking two different directions.

With any mixed language group, this only further complicates things when we have pieces in languages the listener can't understand. It falls on the group to make sure that the emotions go past the lyrics, and now encapsulate everything about the piece. For the vast majority of the album, I can't give good guesses about what these pieces are about. There's nothing displeasing to the ear about any of these tracks, but there is no sense of emotion for any of these tracks, either.

Towards the end of the album, we begin to see tracks that start to better encapsulate the emotions. Mizmor / King is a significant step ahead of every track before it; there is a definitive emotion behind the piece, and it's noticeable in the backgrounds. There is significantly more phrasing in even the sustained notes to keep pushing the phrases. There is also one very distinctive bass note at about the 2:25 mark that is just a cool little extra moment. Wake Me Up / Tamid Chalamti also does an excellent job of again keeping that emotion flowing. The only difference is that this is the only work on the entire album that uses both English and Hebrew in the same song. I have lots of trepidation when it comes to most fusion pieces because often the fusion is just for the sake of fusion. But the arrangement Mariel Berlin-Fischler and Hannah Wandersman penned does a really great job of using both songs together in a meaningful way for each song to tell its story even further.

When it comes to the overall album, the feeling is that I just want significantly more from In the Moment. There needs to be more energy, more emotion, and more effort from the group to sing past just the notes on the page. There are no foul moments from this group, but by the end of the album there is also very little that is memorable. It falls on the group to take the best moments of this release, learn from them, and expand upon them. If Kol Sasson can do that, the next album could really be something.

In the Moment is two steps forward, one step back for Kol Sasson. It is an upgrade in areas that I had critiqued last time, and overall there is definitely improvement, but some of the bite that made the group exciting to me while reviewing Earthquake is subdued this time around.

It feels appropriate to speak on this album compared to Earthquake, and the biggest tradeoff made between the two is acquiring polish in exchange for ambition. There's a baseline of quality here that is significantly higher than on Kol Sasson's previous outing. Many of the rough edges I pointed to last time — inconsistent solo fit, sloppy mashups, songs that drag on beyond their welcome, and empty feelings on a lot of arrangements — are toned down significantly here, even if they are not nonexistent. There aren't really many, if any, soloists that don't fit their songs — the only one I could really mention for this is Lev Chofshi because the tessitura of the song doesn't match the power range of the soloist, but even in this case Hannah Wandersman makes it work quite well. Whereas on Earthquake I had issues with all three mashup songs, this time there is only one — Wake Me Up / Tamid Chalamti — that bugs me in a similar way, and Mizmor / King is one of my favorites on the album for its full sound and great integration of its two covered songs.

Arrangements are probably the biggest upgrade this time around. There are still some with issues — for example, Lev Chofshi's verses feel particularly busy, and More Than Words feels directionless in its delivery — but in general, the micro-level of arrangements is more detail-driven and carries a lot more momentum in the background parts. Mariel Berlin-Fischer and Rachel Slobodien's work on Lama Li, as well as Scott Kaplowitz's work on Dangerously and Mizmor / King, are most representative of this improvement. Also, vocal percussion feels significantly more integrated this time around, providing a full feeling to an arrangement rather than simply being an auxiliary element.

In exchange for this added polish, however, there's some energy that carried Earthquake that is lost here. Arrangements generally feel more full, but Kol Sasson still needs to step up in bringing excitement and intensity to the parts they are singing. And while soloists are more consistent overall — and I want to give a shoutout to Slobodien for the smooth vocal runs on Lama Li — there are no performances this time around that especially blew me away.

One other dampener to In the Moment is the increased homogeneity of song style and soundscape. Dynamics have a significantly smaller range of contrast compared to Earthquake, and it was already a limiting factor on there as well. This isn't a song choice problem, either — it's execution. Lev Chofshi and Brother are examples of tracks that could've added far more intensity. There are moments where the listener may think, "Oh, this is building to something — here it comes!" and then it stays reserved. On the other end of the spectrum, More Than Words could have provided even gentler lows to contrast the surrounding songs. The homogeneity results in an album listening experience that is consistent, but loses its lustre more quickly than it should.

Kol Sasson should definitely be proud of the strides it has made on In the Moment in the name of consistency. Now, the group needs to bring back the excitement and engagement factor that will bring its albums to the next level.

In the Moment streams on Spotify.