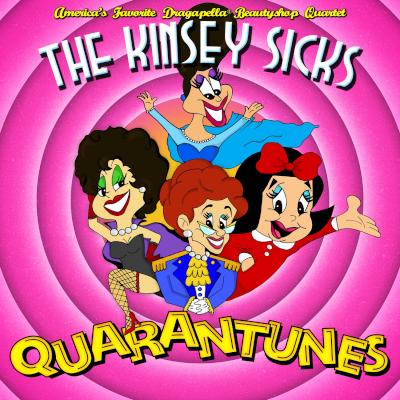 When the going gets tough, the tough play showtunes. Theater uplifts and transforms in all weather, and the new album from The Kinsey Sicks is a gentle raincoat for our times. It would be so much better if we could buy a ticket and go see this show in person. But we can't, so here we are, and cheer up, things could be worse. Musically speaking, at least.

A Bette Midler cover is exactly the right choice for opening Quarantunes. Satire, camp and shaky tuning set the stage for an enjoyable hour of listening. The songs are timely, but not rapidly obsolete. The humor is edgy, but PG-13. As the girls sing, they put the do-re-mi-fa-so in sodomy. That may or may not make you chuckle but it won't send a modern audience into a pearl-clutching fit.

Part of the fun of this album is going in blind and waiting to see where the singers land next. Scalia turns out to be a Leonard Bernstein setting. The Worst Nobel is more predictably set to the tune of a Christmas classic, and Let It Go leaves Disney princesses behind to mock the previous U.S. president's handling of the global pandemic. Even the originals sound familiar. There's a Little Shit (Inside of Everyone) feels like an outtake from Avenue Q, and Privilege had me scraping my brain for which Sondheim tune they were ripping off. Since the group wrote it, I guess the correct answer is all of them. It's a good song, too: the intra-verse dialog is funny on tape and probably delicious if you were to see it live.

These voices are theater voices, not choir voices: expressive, dramatic, and charmingly baritone in a way that only drag queens can really pull off. Generally speaking, the solos are more convincing than the backgrounds. The one exception is the Kinsey Sicks Theme Song Redux, which has some really good barbershop tags in it. The rest of the music is a vehicle for the act, rather than an end in itself.

I enjoy this act and I'm glad The Kinsey Sicks are still making music. I hope their reign continues in whatever comes next.

The Kinsey Sicks are an institution. Dragappella was a life-threatening life choice when this group began in 1993, and horrifyingly, it's not always so safe even in 2021. Their very existence was and is an act of bravery, defiance and self-realization. With hearts of gold, four-part harmony, biting parody lyrics, excessively big wigs and blindingly bright lipstick, they've earned an indelible place in a cappella history. If you have a chance to see them, do NOT pass it up.

That said, political and social commentary, silly camp and "broad" humor are the alpha and omega of the group's ethos. And truly, those terms don't go far enough. This is clever, and groan-inducing, and face-plant inspiring stuff. But it's also generously laden with explicit sexual references, unapologetic progressive politics and kid-unfriendly curses. Most obvious warning ever: do not listen to this with children around. (However, in all fairness, you probably shouldn't listen to a fair amount of contemporary pop or R&B music with children around, either.)

The fact that some of the singing is very good and some isn't, is really beside the point. This is that rare group where RARB's standard rating categories seem laughably misaligned with the group's raison d'être. Quarantunes is top-notch progressive parody; the delivery vehicle is pretty good four-part a cappella without any of the standard bells and whistles of contemporary a cappella recordings. And why would you add that stuff? It'd just muddy the comedy waters. It's the right choice, but listeners raised on the big aca-producers might find this rawness jarring. So be it.

You don't have to be a liberal or a progressive to enjoy the album, in the same way that you don't absolutely have to be a fish to live in the ocean. You will have to see the funny from a left perspective, and beyond that, you can't shy away from humorous but explicit language and imagery, or you won't be able to get through a single song.

Consider titles like There's a Little Shit (Inside of Everyone). If that gets you, how shall we say ... stopped up, then this really isn't for you.

Musically, these are fine musical theatre, cabaret voices. The harmonies are listenable and every song has some quite good moments, especially when it matters most to send the point home; but finding the funny and delivering the message are the only real goals here, and lots of other musical opportunities are just put on autopilot. It's like evaluating the background scenery in a comedy sketch. It's a tree. It's a rock. Whatever. How much attention do phrasing and dynamics really need when audiences get the message and the joke — and are going to be laughing right through it all?

"The most beautiful sound I ever heard ... Scalia ... He'll be proud as you're all de-gaying, but speak soft cause in schools they'll be praying, Scalia, we won't stop oy vey-ing Scalia!"

"Anchor Baby ... They're not like our great colonists who didn't need a visa or face waiting lists, the natives got a brand new God and got genocide with a genesis ..."

Quarantunes is a humorous memento of a deadly serious time. Quarantine and the Trump era are only beginning to give way to hope, and the struggles for equality, justice, safety and common sense are far from over. With a laugh and a wink it's an album that captures the challenges of this time — applicable to all but shown through a LGBTQIA+ lens. Underneath the laughter there's something noble and beautiful and defiant here. After an Off-Broadway show, an extended run in Vegas, two feature films and three concert DVDs, ten albums, and appearances in over 40 US states, Canada, Mexico, Europe, and Australia, Quarantunes continues The Kinsey Sicks legacy.

If you're unfamiliar with The Kinsey Sicks, educate yourself. Notwithstanding the group's self-styling as "America's Favorite Dragapella Beautyshop Quartet", these singers defy neat and tidy categorization, offering their own unique soufflé of satire, political and social activism, and general outrageousness. Though the roots of what they first created back in 1993 can be found in other solo and ensemble acts, I believe it's correct to call them pioneers, and I know for certain that it's safe to call them legends.

What they are not — at least as judged by this current release, Quarantunes — is a group best experienced in an audio-only format, for an extended set of sixteen songs.

Now that may seem harsh and it absolutely gives me no pleasure to write that about a group I admire very much. But having attended the group's hit off-Broadway show DRAGAPELLA! now two decades ago, I know firsthand how much fun The Kinsey Sicks can be in performance. Indeed, the bawdy, raucous atmosphere of their concerts goes a long way to glossing over what isn't always the most technically precise singing or the most complex and ear-grabbing arrangements. It doesn't matter as much — you tend to be more forgiving when you're having such a good time and laughing so hard.

On an album, however, all you really have is the music itself. To be fair, some of the group's signature sass and winkingly sardonic attitude comes across, and there is extraordinary lyrical dexterity to spare, but quite simply and more fundamentally for an audio recording, there are rampant timing issues (even in unison sections), tuning issues abound, the blend is almost non-existent (except for the frequent bold, barbershop-py endings on many songs), and without the visual component, the arrangements are laid bare for (mostly) being disjointed and/or insubstantial. Yes, this album was recorded during the pandemic, with the group scattered across the country, so perhaps one should be more generous and forgiving. But given how much a cappella has been made over the last year, and how good much of it has managed to be despite the challenges, an ensemble like this one can and should be able to do better.

The volume of material on Quarantunes is another aspect that can't be ignored. While few of the songs are longer than a couple of minutes, the group's "schtick" becomes quite repetitive if you attempt to digest all of this in one sitting. Some of these songs have been released as YouTube videos, and periodically releasing in that format — in a similar vein to Randy Rainbow (whose work probably owes The Kinsey Sicks more than a small debt of gratitude) — seems like a perfect way to introduce each of these songs and give it proper attention on its own. Consumed in a single meal, however, the tastes and the textures begin to blend together and some of the jokes get a little stale or overdone. Also, while the majority of the repertoire is covers, the melodic aspect of the original songs is almost always made profoundly subservient to the density of the lyrics. Perhaps as a consequence, though those songs often have a great deal to say, they don't always say it in a way that is musically compelling to hear.

All of which leads me back to the opening. Lest there be any question, I was and will remain a big fan of The Kinsey Sicks and I encourage you to seek them out if/when you have an opportunity to attend a live performance of one of their shows. As for this album, if you're a fan of parody in general, crafty wordplay, and topical, socio-political (and sometimes dark) humor, you may yet enjoy it despite my criticisms. Strictly as a cappella, on the spectrum of recorded a cappella being created today — which for better or worse is what RARB is charged with evaluating — if you skip this release, you won't really be missing anything.