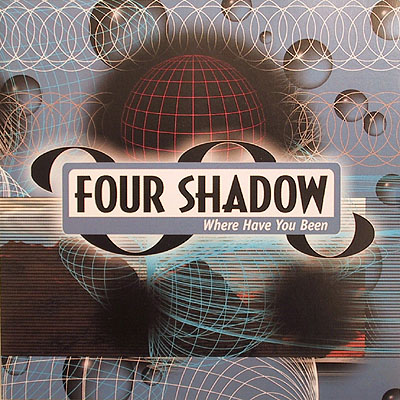 Four Shadow's newest album, Where Have You Been, is ironically titled, considering they last put out a recording over three years ago. So where have these guys been? Well, for one, three of the current line-up are new since the last recording. The major difference between this foursome (plus guest vocals) and the last foursome is that the group is decidedly less Minnesotan, though they are based out of Minneapolis-St. Paul. With fewer hypothermia-addled brains in the mix, the resulting recording is a well-rounded production, with a couple of out-of-place tracks and many outstanding tracks, including a couple of great originals.

First off, the last time we reviewed Four Shadow, I mentioned issues with blend and lyrics (of original tracks). Well, blend is certainly not a problem here. With three years since the last album, there's obviously been time to find a great mix in the recording studio. As for the writing, of the five original tracks, I had problems with two: Little Mouse and George, the latter being an ode to he of Curious fame. Little Mouse had a nice sound, but the subject just didn't keep me close. Its placement between two strong pop covers didn't help it either. Meanwhile, George, set in a rap arrangement, just had no match between subject and execution.

On the other hand, World to Me and If are two diametrically opposite songs, one of true love pledged, the other of true love repulsed. Both are performed with the requisite feeling. World is earnest, while If is funny and should be considered for a future comedy CARA if possible.

So, recommendation time. Thumbs up? Thumbs down? Well, consider it three-quarters up. Where Have You Been is a more desirable recording than the last, but it hasn't quite reached that level of matching their live show. This is a good album, and deserves a listen, though.

One last thought...the ten tracks total less than half an hour. I know I often proclaim my dissatisfaction with groups that lay 25 tracks and take up two hours out of my life in one sitting (exaggeration, just follow the logic). This goes to the other end of the argument. This may actually be the first recording that is too SHORT, maybe by about eight to ten minutes. I don't know if they just ran out of material, but while I applaud them for their restraint on vocal gymnastics, I wish there was a little more to listen to.

After a long hiatus, three years to be exact, Four Shadow has re-entered the a cappella world with a brand new lineup, and thankfully, their latest recording, Where Have You Been.

From beginning to end, this album is phenomenal (and I don't use that word often to describe an entire album). A perfect mix of originals, covers, and funny songs, all performed with brilliance and virtuosity. These guys have their (expletive here) together.

The mix is what brought me into this project. The parts just seem to sit in the pocket of the song. All of the parts are brought forward and spread out across the span of the stereo, making for a very enjoyable listening experience. I'm very impressed with the bass management on the album, which gives a solid bottom to every song. Finally, the studio effects are very tactful and appropriate. A great example of this is the "vinyl crackle" at the beginning of Born At The Right Time.

The soloists are solid — not stand-out killer soloists, but very competent soloists, who give a stylistic feel to every track. The vocal percussion is energetic and driving. The VP doesn't rock out with innovative or creative passes, but gives each track the solid support that it needs.

Each individual track has a place on this album, adding a certain personality to the album that, if removed, would leave the album with a large hole to fill. The standout originals are Wendy and World to Me. Jon McLemore does an outstanding job as writer of both of these tracks, giving them some obvious musical expertise. As for the covers, Ants Marching and Born At the Right Time stand alone above the others.

Cover to cover, this is the best album that I've reviewed since joining RARB in March 2000. The CARA nominating committee should take notice of this project and give it the attention it deserves. Precisely tuned and rhythmic vocals, fun originals, and astute arrangements of cover songs. If you're looking for a fresh new sound in a cappella music, you must buy this album.

As a general rule, and unlike some of my RARB colleagues, I tend not to seek out background information on the groups whose albums we review, preferring instead to appraise the music without any supplementary details. There are occasional exceptions though, and Four Shadow's Where Have You Been would be one of them.

You see, right off the bat, I was confused. The group is called "Four Shadow", but there are consistently five voices heard on most of the tracks. OK, so I check out the credits in the liner notes, and two gentlemen are credited with "additional vocals" (I believe they are former members of the group). That doesn't really solve my problem, since I'm figuring that these guys were around just for the studio gig. So, discarding my hard and fast rule, I check out the website. Turns out, they were founded as a four-guy group but are now five. Besides the fact that "Five Shadow" is not a play on words, I guess the name was (kinda) taken. Still, I'm left a little unsettled.

Why waste your time with this nonsense? Well, because this album is damn good. The music, a mixture of originals and covers with some periodic comic relief, is tastefully chosen, well-arranged and thoughtfully ordered on the album. The guys have a polished, professional sound which, at its best, approaches the harmonic crispness of Rockapella or The Blenders. The vocal percussion is dizzyingly punchy, and while it does fall just short of the nuanced, varied VP coming from, say, The House Jacks, it's as good as just about anyone else.

So again, why waste your time with the numbers discussion? Well, because listening to the album, I couldn't help but wonder how these guys would sound in concert, performing arrangements conceived for five or more voices. True, we're the Recorded A Cappella Review Board, but I like to think that a listener's enjoyment of an album might some day lead to buying a ticket for a concert. And on that note, am I the only one who would be mildly distracted if I went to a Four Shadow concert, knowing nothing about them, and five guys showed up on stage?!

As for the CD — if you only buy a couple of pop a cappella CDs, buy the usual suspects. But if you're broadening your horizons, here's the proof that there are other groups out there who can do it just as well. Well, almost.

The men of Four Shadow are fun, silly and innovative. Where Have You Been features five original songs, ranging from the "boy band" style of World To Me to the comical hoedown If. Four Shadow has a produced sound, yet retains an a cappella feel, which I think is a positive thing. There are only a few parts where a cappella newbies would ask if instruments other than voice were used.

I liked the originals way more than the covers, but the covers were also good. In One Week there was a bit of stumbling over the words, which is understandable. I still think it is the best a cappella version of this song that I have heard. Fields of Joy used a guitar effect that was quite nice. But the originals are still my favorites.

If is cheesy and funny, and I totally identify with the point these guys are trying to make. Ever had one of those people who just really liked you and no matter what you did, they would NOT leave you alone? You will love this song. George is a funny rap about what else — a monkey! They incorporate some musical phrases from that "Funky funky bidibidibop" song. (Total mind blank, what IS that song called?) [Editor: It's called Cantaloop (Flip Fantasia), from Us3's Blue Note records release, Hand On the Torch.]

The arrangements are all solid, but I would hope for a little more variety in the future. Four Shadow has a great vocal percussionist, who took full advantage of the studio for some very nice percussion tracks.

The tracks were nicely layered for a full sound, but I wonder how this group performs live. There are only four men listed as members. Subtracting percussion, bass, and soloist, that leaves one for other things. I was sad to note that one of their main song writers and soloists, Jon McLemore, is no longer in the group. Let's just hope that this album is a new beginning and not the beginning of the end. But buy this album just in case!

On this album, Four Shadow comes across as either A: an extremely talented, over-achieving collegiate group or B: a schizophrenic pro group just shy of the big time. Some tracks (Wendy, Fields of Joy) are tight, catchy, strong examples of the "vocal band" rock style. Others (Little Mouse, If, George) are completely silly tunes that would make Da Vinci's Notebook proud. Still others (One Week, Ants Marching) are standard collegiate covers, done with a Minnesotan accent (I think). While there's nothing inherently wrong with variety, it is taken too far on this album; the changes in style are too jarring to allow the listener to really settle in.

From a production standpoint, the voices are fairly well-balanced, and the vocal sound is well-served, with the exception of the percussion, which I can only describe as "conspicuously vocal". Joe Michael's VP sounds are solid and tight, but something in the mix makes the snares sound like spitting (which of course they are, but still...). Also, the percussion was competent and intelligent, but somehow seemed to lack any kind of signature style, contributing to the lack of cohesion on the album.

On to the good: these men are talented singers and clever writers. Their good-natured sense of humor and their infectious energy, pervade the album. Their harmonies and blend are beautiful; the consistent tuning is the single greatest strength of the album.

Overall: The men of Four Shadow haven't quite found themselves yet. They don't seem to buy into their own bad-ass-ness enough to go the vocal band route, and they're too talented as singers to resign themselves to the humor rack. Personally, I think their wit and humor would be an excellent distinguishing mark on a vocal band sound. However, that's not my call; it is up to the group to pick a direction and focus for themselves. If they do, they have the potential to reach the upper echelons of a cappella.

Where Have You Been is available online from Primarily A Cappella and Mainely A Cappella, or see the Four Shadow web site.