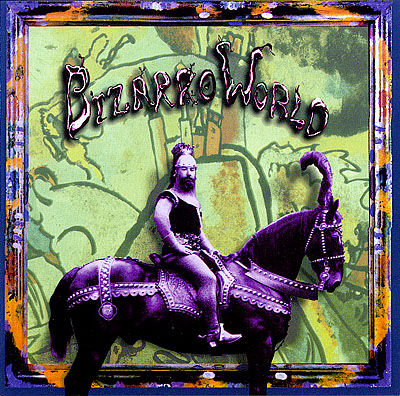 This album is only all right. While there are no major mistakes, no consistent tuning problems or the like, there are also no moments of sheer excitement. Nowhere does the album really sing. It is a fine enough disc from a group which in all likelihood is more than fine enough in person, but that's as far as it goes.

That said, some tracks are more successful than others. All I Need ... has a nice, gentle groove; With or Without You is smooth; The Sweetest Thing is appropriately bouncy. By the same token, some tracks don't quite get the job done. Lady in Red is plagued by inconsistent pronunciation (is that Chris DeBurgh or not?), Tainted Love is annoying no matter who does it, and Help! needs some.

What could the group do for a more impressive follow-up? Aim for a sound rooted in less classical vowels, and given life with a more deliberate use of energy. We all know that guy groups are crazy fun on stage; the same effect can be achieved in the studio with more attention to matching vowels, intonation, and timing across the parts.

A good effort, but overall not extraordinary.

The Virginia Gentlemen may be pleased to learn that I find their latest album, Bizarro World, aptly named, but I suspect they won't be happy when they find out why.

Perhaps the most bizarre elements of this album are two choices made by either the group's producer (if the album was not self-produced) or sound engineer. I would single out these individuals by name, but no such credits are offered in the liner notes (which, incidentally, would certainly tick me off if I were one of those people). In any case, for some inexplicable reason, the soloist on virtually every track has been mixed so far into the background that the lead is almost swallowed by the rest of the group, or, in the case of Lover Lay Down, is at times almost inaudible. Furthermore, the vocal percussion — perhaps because, while not bad, it is a bit more labored than some of the smoother v.p. heard nowadays — is most often mixed behind the background, thereby hampering Chris Doermann's (on most songs) efforts to provide a solid backbeat.

Unfortunately, the bizarre nature of this album doesn't stop there. The repertoire choices are over the map — from Blue Suede to Ben Folds Five to the Beatles to Bruce Hornsby. I realize that much of college a cappella is about singing what you want to sing, but it's difficult even for the pros to sing everything well. I say, know your strengths and stick with them. For the Gentlemen, I can't quite pinpoint what that strength is just yet. At 17 voices strong, they can definitely create a wonderfully rich sound and have some solid soloists to match. However, some greater sophistication in their arrangements — which shade towards the power chord "ooh" "ah" variety and don't develop or vary dramatically during the course of a given tune — would help sustain this listener's ear through songs which, as is, became slightly boring after one round of verse-chorus. And, returning to the issue of repertoire, why do we need yet another version of With or Without You and Mercy Street? They do a capable job with both, but either one can be heard, in mixed or all-male varieties, to better effect elsewhere.

I feel like I'm slamming the guys, and they're really not bad at all. For me, though, they just feel a few years behind the curve of top-notch collegiate a cappella. When I was in college, a lot of what these guys do would've wowed 'em. But with groups like Stanford's Fleet Street Singers, Tufts' Beelzebubs, Penn Six-5000 and others always pushing the envelope, the bar has been raised and with it, my expectations.

The Virginia Gentlemen know what they're doing. Every track on Bizarro World is marked by strong, clear voices, fantastic blend, and solid covers of familiar repertoire. From production to tuning to solos, everything is good. Now comes the hard part. Now they face the challenge of making it great.

Virtually everything I'd like to see the Gentlemen improve for the next album is a matter of fine-tuning. Every score I gave was a notch lower than I wanted to give, because some fixable flaw distracted me. Sometimes it was the block (All I Need Is a Miracle) or soloist (Lover Lay Down) audibly running out of breath. Sometimes it was a level of squareness inappropriate to the song (Tainted Love). Often, it was an apparent lack of perfectionism in the studio. Several soloists strain or go out of tune on notes that they nail elsewhere in the same song. I know it's expensive, but singers this talented deserve as many takes as they need to get it just right.

stylistically, the Gentlemen are fairly traditional. That's a wise choice when it comes to arrangements and production, because this group sounds gorgeous on simple held chords (although they also shine on more complex, late-'90s-style arrangements like Everything, complete with the CD's best solo). Traditionalism is no friend to the Gentlemen when it comes to repertoire, though. While three of these thirteen songs are a cappella firsts for me, six of them (by my count) could stand to be retired from the collegiate circuit altogether. On the other hand, the Gentlemen do a good job with each one, so purchasers with unjaded ears probably won't mind.