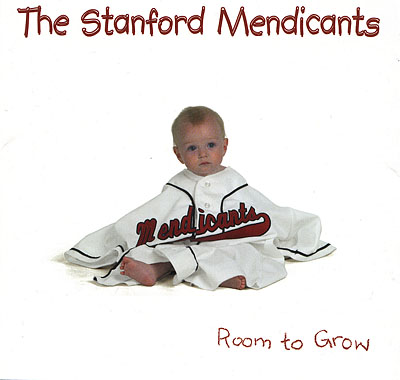 In a lot of ways the Stanford Mendicants haven't changed since their last album (Besides What You See). They still apply a contemporary sound to the oldies. They still over-produce the songs in the studio, giving them a glossy and metallic sound that is at odds with the vintage song selections. But on Room to Grow, this all works much better than it did on Besides What You See.

One of the reasons is that they've toned down the aforementioned studio effects. They seem to be using an auto-tune type of effect. They never used this effect as much as, for example, Cher did on Believe, but in the past it still added an inhuman tone to their music. On Room to Grow that's still true, but to a much lesser extent. It was hard to get into their smooth production of At the Hop from their last album. It just sounded fake. But this time they deliver a believable I'm a Believer. Happy Together is a bit slick, but it can still be fun.

The Mendicants have chosen a better batch of songs on Room to Grow. They've cut down on more intricate and contemporary numbers (no Seal covers here). They've stuck to the basics and the oldies. Sukiyaki and Gone Too Soon aside, the next most current ones are Jessie's Girl and Gimme Three Steps, songs that would have been the throwback numbers on other collegiate albums. The oldies selection this time around makes for an album that's much more cheerful and accessible than Besides What You See.

While Room to Grow is a marked improvement for the Mendicants, they're still falling into some of the same traps. The auto-tuning effect on Higher and Higher is extremely blatant and sucks the joy out of the song. On two of the songs — Take Me Home, Country Roads and April Come She Will — they downplay effects and focus on old fashioned choral singing, but they still sound divorced from the songs because they don't use any soloists. The songs are beautiful, but they sound like backing tracks waiting for a clear-voiced soloist to lay down his part. Is You Is, Or Is You Ain't My Baby is pure enough, but too lifeless to work. But on the whole, the Mendicants have still put together an enjoyable album that holds up well under repeated listenings. If you liked their last album and won't be put off by a significantly less contemporary track list, then you will absolutely enjoy Room to Grow.

One small note: Brian Kucer (who delivers a great solo on I'm a Believer) does very cute baby noises that aren't "really annoying" (as one of the other Mendicants claims). Even if they do sound a bit like Howie Mandel's performance as Gizmo in Gremlins.

Don't think of The Mendicants as a modern collegiate group striving to be hip. They are actually a very cool glee club.

The Mendicants have embraced the philosophy that it is truly hip to be square. The back-ups are rounded and open. Each syllable has been meticulously rehearsed. The blend is good. The percussion is solid, but not quite driving. Song choices are predominantly old rock and roll classics. And a little cheese here and there is nothing to be ashamed of, right?

The production is strong enough that the old school style arranging and singing on Room To Grow holds its own against the more modern stylings of the contemporary collegiate a cappella "flava". The Mendicants' sound is a smooth mix with a rich low end: the full glee club spectrum. White bread with punch.

Some leads are stronger than others (the ones on the songs that earned 4s), but mostly that's a matter of taste. For consistency, though, this CD is a ten. The tracks are remarkably uniform. If you like the first track, you'll probably like the whole thing.

Sure, the mellow style itself has been done to death already, and the quaint approach to rock doesn't really do it for me, but I can imagine a middle-America crowd that could fall in love with these offensive-to-no-one cuties from the coast. Pleasant leads and boyish charm: grandmas and schoolgirls beware!

Maybe I should just tell the powers-that-be at RARB that all I want to review are a cappella CDs from Stanford University. I mean hey, I've had the chance to review Talisman and Mixed Company; I already had two tapes (yes, tapes) from The Fleet Street Singers; and now, to add to the list of winners, there's Room To Grow from the Stanford Mendicants.

Now the guys in the group probably aren't going to like me for this, but the best way I can describe the Mendicants is as a mini-glee club. No, no, they're not a white tie and tails, straw hat and cane throwback to yesteryear, but their style of arrangements, their choice of repertoire, indeed their actual performance of the music, makes me think that this group is somewhat torn between a spirit that loves so-called "modern" a cappella and a soul rooted in legit, ensemble singing.

The result? A compromise. They sing both. The effect? Neither style gets the best effort this group has to offer.

Take the more "pop"-oriented selections: Happy Together, I'm a Believer and My Girl, among others, are competently rendered and show off the group's ability to create a layered, rich sound, with interesting, poly-syllabic backgrounds. Unfortunately, the arrangements of all three songs do not move beyond their initial impression. After one verse and chorus, you've essentially heard the whole song, which tends to make the first minute fun, and the last two or three a tad boring (Jessie's Girl being an exception to this rule). To some extent, the fault lies in selection of repertoire, as most of the tracks would fit nicely in the Easy Listening category at Columbia House. These songs may be classics, but they cry out for a fresh approach to make them interesting when done a cappella.

Somewhere in the middle, between the hip and the traditional, are selections like Is You Is Or Is You Ain't and That's Life, both of which leave no question that the Mendicants could devote themselves to vocal jazz and be a helluva group. These guys certainly have a handle on jazzy chords and syncopated rhythms. Sadly for me, once again, their choice of repertoire is troublesome. It's not that no one should ever cover Frank Sinatra or Louis Jordan, but if you do, the arrangement needs to be a new look at an old classic, rather than a slavishly close transcription of a big band chart. Furthermore, the soloists either need to match the original dead-on, or do something with the vocal that makes it their own.

Finally, there are songs like April Come She Will, Where the Southern Roses Grow and Take Me Home, Country Roads, which probably feature some of the best pure singing on the album. I will admit that an album full of mellow ballads, arranged, like these songs, with lush chords, and a more barbershop and/or choral feel, would have difficulty holding my interest as well. But fact is, these songs don't need the "oomph" and power of a rock 'n' roll tune or the genre-specific "feel" of vocal jazz. They just need beautiful, tight, sweet singing — and the Mendicants can definitely deliver that.

To be honest, it was these last few songs, plus a nifty arrangement of Babyface's Gone Too Soon (recorded by Michael Jackson), that confirmed for me that the Mendicants are not just Beelzebubs wannabes. They are gifted, talented singers, who want to try a little bit of everything. So be it. The result may not be the best a more focused effort could yield, but it's most enjoyable just the same.

The Stanford Mendicants
P.O. Box 19070
Stanford, CA 94309
Please include a note stating which album you would like to purchase.
×