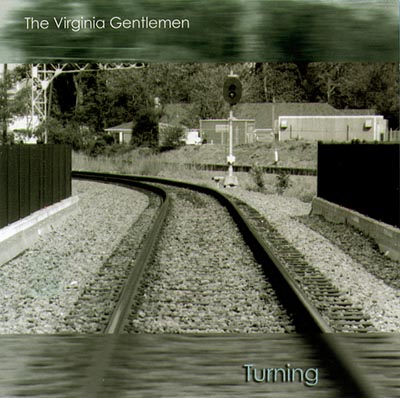 There are a number of elements of The Virginia Gentlemen's latest release, Turning, which are immensely satisfying to me, especially given some of the criticisms I felt compelled to level against them for their last effort, Bizarro World. The mixing and production are miles ahead of their last CD. With a few minor exceptions towards the end of the album, the soloist is right up front, not mixed into oblivion, and the percussion is always suitably punchy. The arrangements and repertoire, with a few notable exceptions, feel a bit more hip and sophisticated, and all of their performances have a certain energy and overall "oomph" which was previously lacking.

Mind you, even from Bizarro World, it was clear that these guys could sing. And sing they do. Of particular note is Norman Smith, who lends some soulful ornamentation to the opening track and does the second-best Stevie Wonder tribute I've heard in a while (after Cadence's I Wish) on As. I'm not sure which is Rich and which is Robbie, but they both do a lovely job with the shared solo on Guster's Either Way, and Robbie comes back for an energetic and fun version of Queen's Crazy Little Thing Called Love.

So the guys have upped their general scores to solid 4s and the individual song tracks rank generally higher overall as well. However, they're not yet in that upper echelon of groups that consistently churn out the albums that merit high 4s or even 5s. The problems this time around are perhaps a bit more subtle, or at least less egregious, but they remain areas on which the group needs a bit of work.

Repertoire was a problem on the last album and it continues here. The overall energy of the album compensates somewhat, but there is still a noticeable bias to ballad-y or at least to mellow uptempo numbers. These guys can rock when they want to, but they seem reluctant to do so.

Stylistically, there are a couple of tracks that stick out like sore thumbs. Sure, it's nice to be able to say, and even better to be able to prove, that you can sing anything, but there is a reason why radio stations have programming directors — to maintain some level of consistency of material. Since the jazzy My One and Only Love and the closing All Creatures of Our God and King are not even remotely the best tracks on the album, they seem even more out of place. Me and Julio Down By the Schoolyard might have fit in better if a true percussion track had been incorporated, but the rhythmic background riff doesn't make up for the lack of real percussion, and the soloist doesn't have much of a feel for Paul Simon's lilting delivery.

Also, size matters. The Best of What's Around is solid, but it lost me after around 4 minutes and went on for at least a minute more. Who's Gonna Ride Your Wild Horses clocks in at 5:08, which seems more like 10 minutes, and When I See You Smile is already a boring enough song that cutting a minute or more out its 4:31 wouldn't have killed anyone.

Lastly, MLK — why, why, why? It doesn't show off anyone's arranging skills (four chords or so), it's not a virtuosic solo, it's not an interesting song per se, it's been done plenty already, and the blend is so overprocessed that I'm reluctant to give the group credit for it. OK, I'm off my soapbox.

So on the one hand, based on their previous album, I'd be inclined to tell you to run out and buy this CD. On the other hand, the guys have shown that they truly know how to improve and fix, which suggests that perhaps you should wait for what is likely to be the even better next one.

The Virginia Gentlemen have released a terrific 10-track album. The only trouble is that it has 15 tracks.

I'm more than aware of the non-musical factors that come into play when college groups cut CDs. You want to see your faithful seniors get a solo before they graduate. You have such amazing memories of that one concert when the crowd went nuts. Even the basses get choked up when you sing that one hymn, and you want to keep a record of it forever.

I get the feeling that The Gentlemen know that the trouble tracks aren't up to the same standard. That's why they're hidden at the end. The last third of Turning is great for Gentlemen alumni to treasure in their old age. Luckily, the first two-thirds are great for everyone to enjoy right now.

Other than a couple of moments when the block is hanging on to a jazz chord by the skin of their teeth (My One and Only Love), The Gentlemen have rock-solid fundamentals. This is one group that has not abandoned the under-appreciated art of the "oo". MLK raises the bar on ooing, and I'm a connoisseur. The creamy blend on another oo-heavy track, Either Way, is a reminder of why single-sex groups never go out of style. The group bounces with fun on She Don't Use Jelly and Crazy Little Thing without ever losing its center, and shows lovely dynamic control on the slow songs. The soloists are mostly very good, with skillful turns by Eric Buechner, Chris Doermann, Ben Thompson, and Norman Smith. Best of all, The Gentlemen have found a real superstar in Rich Arnold, who has the kind of limitless, free tenor that just makes me drool.

Throughout the album, I heard a few fixable problems. Fairly frequently, I could hear the soloist (She Don't Use Jelly) or the block (All Creatures) running out of breath and croaking to a halt. This isn't a talent problem, just a technique problem, but it's definitely time for some lessons in diaphragmatic breathing down in Charlottesville. (Too bad Rich didn't communicate more of his wisdom before graduating.) Norman occasionally gets carried away on his riffs and lands on notes I think he doesn't really mean. And while it was a great idea to have women guest-star as backup singers on As, they don't grab the song by the throat and shake it the way they should. No matter how high the notes are, when you're singing soul you need to shout it like you mean it; no offense, but these ladies sing like sopranos.

The weak tracks hurt the Repeat Listenability score of an album that would have gotten a 4 or 5 if I hadn't had to hit "skip" so much at the end. Next time, I hope this group cuts some more of the fat. You can always burn a CD for the group members with the cuts that didn't make it. Your grandkids will be just as impressed.

Much of Turning could be equated to musical Nyquil: a cappella that puts you gently to sleep. You probably know what I'm talking about...the amazing tendency of collegiate groups to turn upbeat, funky numbers into mellow, melancholy tracks or even ballads. This can be a pleasant thing (the lush chords and rich solos on MLK and Who's Gonna Ride Your Wild Horses) or like the geometry class/staff meeting that never ends (an uninspired Best of What's Around). Much of the problem comes from a simple production and arranging style; block chords carry the day, made warmer and rounder by the reverb-drenched mix. While this works for The Gentlemen in contrast to the technical wizardry a lot of groups throw at you nowadays, it also blends track after track together. This is further compounded by soloists who are fairly capable across the board, but often indistinguishable in waves of identical tenor II/baritone sound.

Yet just as you start drifting off to la-la land, The Gentlemen unleash a few aggressively interesting tracks. Anyone who can make Superman, one of the most overplayed songs of fall 2001, new and enjoyable deserves huge applause in my book. (Shout-out to the arranger: I'm a huge fan of the "Up up away, fly away from me" hook in the block.) Likewise, great chords and a wistful take on 1979 disproved my assumption that Smashing Pumpkins could never work a cappella. Tracks like these manage to make up for the painful inclusion of Me and Julio, which I would erase from musical history if I could. There's nothing like a bad song covered badly.

On the minus side, tuning issues rear their ugly heads periodically, particularly in the top men's falsettos. I would have expected a slightly closer eye to detail from a group that's been around this long and put out so many albums. An otherwise nice take on Stevie Wonder's As was totally wrecked by horrendous tuning and tone on the top backup vocals, which I was surprised to see were done by guest female vocalists. It was ironic that the people who were brought in from outside the group were the ones who ended up derailing the track. And this has got to be the third or fourth time I've heard a group attempt Either Way, and it NEVER works either onstage or on disc. Men's groups, take notice.

This album is the equivalent of the guy next door. It's really nice. Not gorgeous, not particularly amazing on any front, but solid. Depending on what you're looking for, it may be the one to take home.

CDs can be ordered online through the group's web site.