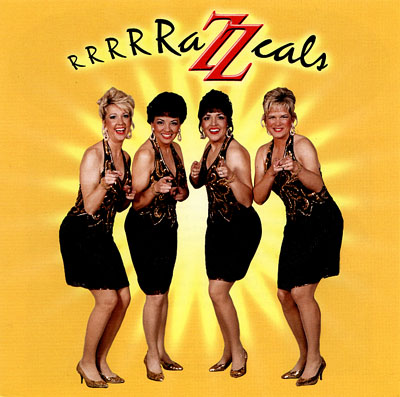 It's quite refreshing to be writing a review for a female barbershop group! The Razzcals perform with energy, sass, and enthusiasm on RRRRRazzcals, an eclectic record by this quartet from Northern California. This 12-song album features a good mix of more traditional barbershop tunes, like I Wish I Had My Old Pal Back Again, with departures from the barbershop genre, like a rendition of the jazz song Mood Indigo, and a rousing medley of surf-rock hits by the Beach Boys.

My favorite tracks are the beautifully sung, Embraceable You (never thought I'd like a barbershop version of a jazz song!) and the very gleeful Hey Daddy. Both songs presented with emotion, clarity, and class.

I have to say that these ladies perform much better on the more traditionally "barbershop" pieces like Oh You Beautiful Doll and The Charleston March. Their attempts to arrange more contemporary tunes into the barbershop style (e.g. Dancing in the Streets/It's Raining Men) fall flat because their delivery never quite crosses the line between the two styles and instead straddles the fence, creating a very strange vibe. Also, some minor intonation and blend problems appear throughout the CD, which wouldn't bother me so much if the arrangements weren't so bare, leaving those kinds of small mistakes blatantly obvious. Additionally, the production quality is not as clear as I'd like, nor are the soloists particularly powerful. This is most evident, again, in the non-traditional/contemporary pieces, where a more solid chest voice would have added some luster to the tunes.

Still, this is a fun album for the casual barbershop aficionado — I have a feeling that more serious fans of barbershoppers might have a couple bones to pick with the aforementioned issues. In any case, though barbershop is still not exactly my favorite cup of tea, I did enjoy this album and took it for a couple spins in the old "jukebox".

I think The Razzcals have put together a good album of traditional and some non-traditional barbershop tunes. Whether or not you'll enjoy this album is dependent on a couple of factors. First, I think this is an album that only a barbershop fan would enjoy. I'm not saying this because I don't care for barbershop. On the contrary, I've been known to enjoy a good barbershop album or two (see my review of The Boston Common). But as far as barbershop albums go, I don't think this album would appeal to those who do not already enjoy the genre.

I'm not sure if it's the Sweet Adelines sound in general or just this group, but to me, there is something about their sound that is very grating. It was difficult for me to listen to this album for very long. I didn't get the smooth, homogeneous sound that I hear in groups like Acoustix and The Boston Common.

As for innovation and creativity, I hear very little of it on this album. This is my point of view based on my little knowledge of the barbershop world. The songs performed on this album are not all traditional barbershop tunes, but from what I can see, it doesn't look like the non-traditional tunes are arranged by or even for this group. If the group is performing arrangements that they didn't write, of songs that they didn't write, then I really have a hard time finding the innovation or creativity here. I hear very little emotion in the album as well. I'm not sure if this is just a genre issue or an issue with this album, as barbershop seems to be more about the technicality of the singing and less about the emotional aspects.

The Razzcal's performance is very good. It's not perfect, but very good. Their rhythm is wonderful. They are very much together at all times, rhythmically. I did hear some moments where the tuning was less than perfect. The sound production was very good, leaving few ideas in my head as far as improvements.

The Razzcals is a California Sweet Adelines quartet that formed in 1995. They have won numerous championships and titles. In October, 2000, they earned the title of "2001 4th place SAI Medalist Quartet". The group's 2000 CD RRRRRazzcals features a number of classic barbershop songs as well as songs from the realms of jazz, top-40, and West Coast "beach" music.

Therein lies the problem with this CD. World-renowned business consultant Tom Peters has advised business leaders to "stick to their knitting", meaning "do what you do best — don't stray". That philosophy would appear to apply to musicians also. If you read the Razzcals' credentials and accomplishments on their web page, you realize that the members are well versed in the barbershop quartet idiom. On the CD, as the type of song moves further away from barbershop, the Razzcals find fewer and fewer opportunities to demonstrate their capabilities. By the time you listen to the last cut on the CD (a Beach Boys medley), you realize that song selection is indeed very important.

The same comment can be made about the first half of Dancing in the Streets/It's Raining Men. Dancing is not a vehicle designed for four-part barbershop a cappella. Having said that, the last half of It's Raining Men gives the track a small opportunity to survive, but just barely.

Beyond the music styles causing problems, I am not totally comfortable with the quartet's tuning on the CD. I'll be the first to admit that my brain struggles to think in the vocal range of a Sweet Ad tenor (a.k.a. high soprano), but I find that the tenor is too often not locking into the chord with the other three parts. When all four sing as their record says they can, these ladies push out some awesome sounds. But too many times they don't lock, and I keep feeling like it is the tenor that causes the problem.

In the area of production, several of the songs seem to suddenly start. There are none of the sounds associated with vocalists preparing to sing. Listeners need to hear a minute amount of the sound preceding the first singing sound to fully understand what they are hearing. In the worst case, the first consonant is missing on Oh, You Beautiful Doll. Dancing/Raining also is clipped. Whoever prepared the final master cut the songs too tightly.

There are some very good cuts on the CD. I really like The Bandstand in Central Park. It is a very good barbershop-style arrangement by Nancy Bergman. This gives them the opportunity to use their skills and musical devices to produce the best piece on the CD. Very nice.

In the realm of jazz tunes, the Razzcals have two shining songs: Gershwin's Embraceable You and Fats Waller's Keeping Out of Mischief. The soloists on both songs sincerely express the sentiments of the lyrics. The backup singers support the soloists and assist in leading the listener where the tune's emotions want to go.

If you are a Sweet Adelines fan, you will probably want to add this CD to your collection. These ladies are very good. Their rise from a seventh place ranking to a fourth place makes you believe their focus on barbershop will lead them to the top.