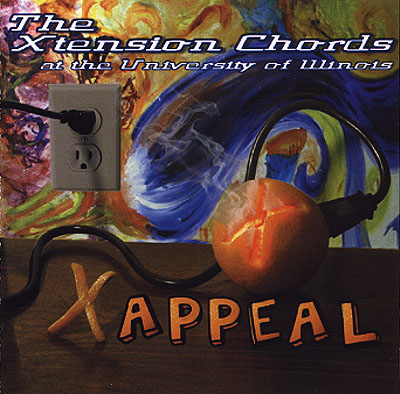 Those who make it to the end of this latest XChords album have quite a treat in store. And making it to the back half of the disk is no great chore, what with the solid and sometimes splendid collection of usual suspects assembled here on our behalf.

Chris Quidlat starts the parade with a knock-out solo performance on Duran Duran's Ordinary World. His handiwork marks the best of the non-parody material, which is generally respectable but rarely mind-blowing.

In keeping with my somewhat saturated tastes, my interest peaked at the brilliant and startling Keep Your Crummy State, a rewritten power-rock anthem that may be the first place in pop culture to successfully substitute the word "Illinois" for the phrase "Rock and Roll". The arrangement is simple, effective and nailed. The vocal guitar solos scream in unabashed glam-rock glory. Steve Nash's solo rocks under any circumstances, but especially when given such great lines as "We don't need no pointless scenery/Right here in the middle of corn and soy country.".

Really, it's brilliant. And it's just one of the end-of-the-set attractions. Viagra Falls breaks new ground as one of the first truly funny mock commercials to make its way onto a collegiate disk without being assassinated by sub-par execution. The Beastie Boys riff on the hidden track is also technically superb, allowing its shock value to come forth in a most satisfying manner.

In the more mainstream section of the disc, one of the better tracks was surprisingly the XChords' interpretation of the Virginia Gentlemen's much-covered arrangement of Billy Pilgrim's Insomniac. Also a success was the blend of Britney and blaxploitation in the group's Shaft-laced Baby One More Time. The rest of the album is more standard, more straightforward and only occasionally memorable. Nice production touches on Starship's We Built This City caught my ear, as did a pretty solo on Fly to Heaven, but most of it is standard and unspectacular radio fare.

Far from onerous, especially when such treasures lie in wait.

The Xtension Chords from the University of Illinois have released XAppeal, a fifteen-track album that goes from spectacular to average, and everywhere in between.

XAppeal comes right out the gate swinging. A Little Respect, an Erasure cover, is fantastic. Precise rhythms and energy, coupled with a distinctly keen soloist, make this the most enjoyable track on the album.

After such a positive opening, I am disappointed to see the Xtension Chords fall flat on their face with Inside Out. Aside from the soloist, this track is extremely obnoxious and unpleasant, a quick fast forward for this reviewer. When you imitate a guitar sound in the future, please take the time to study the instrument so that you eliminate the sloppy notes and amateur feel. It's not enough to just make a bunch of sounds and then distort them with software to develop a guitar sound; you need to stylistically perform the part. Oh, and don't put it so far out in the mix that it covers everything else in the song. Enough complaining; onward we go.

Fly From Heaven brings back the sanctity of college a cappella with another solid effort. The soloist isn't going to win a singing competition anytime soon, but he earns his keep and supplies a perfect voice for the song. He sings with a very honest and inspired sound. Two thumbs up!

Just when you thought it was over, the Insomniac train heads back into the station on this album. The Xtension Chords follow every other all-male college group and perform the Virginia Gentlemen's arrangement of this Billy Pilgrim song. They actually change a few accents and parts, making their version different and very enjoyable. As I listened, I couldn't help thinking about how every all-male group performs this very arrangement because no group will dare to write another. It falls under the arranging principles that if you can't do it better, don't do it at all. I did some research and discovered that a Gentleman named Craig Fennell wrote the arrangement. I think CASA should give Craig Fennell a CARA for Best All-Male Arrangement Ever. This arrangement has stood the test of time, and the Xtension Chords do it proud with an inspirational performance.

The Xtension Chords fall into a lull in the middle of the album with a lot of average songs. We Built This City doesn't have the soloist or arrangement to fall above the average, and As Long As You Love Me is as square and mellow as they come.

Just when I begin to think that the soloists on this album aren't all that spectacular, along comes Chris Quidlat. Ordinary World is the only live track on the album, but Chris makes it one of the most memorable. He has a passionate voice, highlighted by his professional tone and vibrato. I only wish that he had sung more of the tracks on this album.

The album attempts to end on a funny note with Viagra Falls. Unfortunately, after two times through, this track isn't that funny anymore. The hidden track was a short excerpt of the Beastie Boys' Paul Revere. It was okay, but kind of out of place in this project. Too bad it wasn't hidden a little better.

XAppeal is an album by one of the top all-male groups in the nation. They don't hold up the level of quality in every track on this album, but even the bad tracks are better than some of the other college albums out there.

As the liner notes/introduction/year-in-review of XAppeal explain, the Xtension Chords set themselves a firm goal of self-improvement for the year in which they made this disc. Not having heard the group before, I can't say how successful they were in this endeavor, but it would seem to me that they polished themselves up to a certain level, and now need to, as Emeril Lagasse would say, kick it up a notch.

The XChords produce a pretty rich sound — well-tuned with a good amount of energy. They could certainly stand to develop their falsetto better and utilize it more often, which is one of the things that can make an all guy's group sound so neat, but their sound, on the whole, is quite solid.

Their good sound and energy just aren't utilized to their fullest, mostly because the arrangements don't push the limits of textures and layers that could be produced. The simplicity of the arrangements likely works well for live performances, where the group's energy, enthusiasm, and antics can take a more leading role, but on CD, I find myself thinking how much better they could be if they really tried hard to take things to the next musical level. A couple of the arrangements work really well for them. Most notably, Baby One More Time is a great arrangement that really uses these great voices to create an atmosphere and play around in it. As many issues as I have with Britney, the XChords pull this song off extremely well, with strong soloists who stand on their own instead of trying to laugh at the camp value inherent in the song.

And when the soloists nail things, it makes the song. Inside Out has a real powerhouse soloist in Art Cacayuran. Without him the song is mainly block chords and a ridiculous amount of distortion, but his strength and energy make the song a winner. Russ Todd also puts in a very passionate version of Insomniac, and I've already mentioned the soloists on Baby One More Time.

Every time I listen to this disc, I begin thinking it's better than I remembered it, and end thinking it's much weaker than when it started. Did I tire of their strengths? Did their weaknesses begin to grate on me? No, the first half of the disc is just much stronger than the second half. As the CD progresses, things just get progressively more boring. Some songs get old quick, One Week gets old even quicker, and then they finish with a live track with tuning problems, a hack which may amuse fans from their school but loses me, and a Viagra joke. But when I start the disc over, I'm pleased again for the first six tracks.

XChords, you've done a good job and turned out a pretty good yearbook CD. Now it's time to take a lesson from Emeril. Bam!