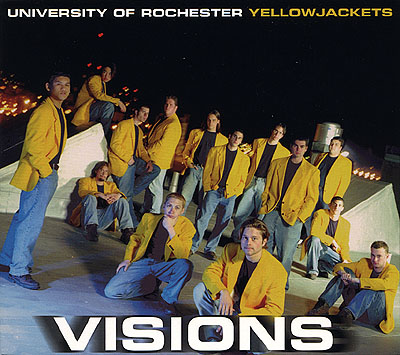 I've listened to the 'Jackets (as those of us in the know call them) for a few years now. The two previous albums were both quite good, models, if not of innovation, then at least of smooth close harmony and balanced sound. Visions is a slightly more sophomoric effort than I would have expected from the third album I've heard. Although most of the blend remains, the group offers even less groove and convincing interpretation of their typically diverse assortment of covers.

A principal sticking point on this disc is the assignment of soloists. Understand, the 'Jackets sing smoothly, lovingly, and tenderly, and therefore, they tend not to rock. As a result, some harder-driving songs suffer. This was the case on the previous albums, and remains the case here: Back in the U.S.S.R. and Higher aren't as focused as they could be, in part because the backing harmonies are just too nice to support a lead who does not so much lead as sing nicely himself.

So, a little less convincing than the first couple of times around. At the same time, still just as well blended as before. Visions is a fine album, just looking less to a fantastic future than at a cappella a few years ago: delightful, but not quite down with the times.

I had the great pleasure of reviewing Common Time, The Yellowjackets' last album, and unfortunately Visions does not live up to its predecessor. I recall being very surprised at the quality of Common Time in terms of its production, singing, and overall style. The biggest setback The Yellowjackets seem to have encountered in the time that's passed between this album and the last is that a number of great soloists are no longer with the group. As a result, many of the songs on Visions are well performed in terms of the background harmonies and production, but lack a powerful soloist to tie up the loose ends. Actually, listening to some of the soloists gave me a cramp, I was cringing so hard. On that note, thumbs up to Rob Gellman on Back in the USSR, Jordan Pique on Imagine That, and Matt LaSalle on Jackie Wilson Said for performing admirably.

Additionally, the arrangements on Visions are a bit more gleeclub-y/doowop-y than I recall their previous style being. While that arrangement style works on some tunes (Chrissy Reid, Imagine That), it doesn't on others (Mess, Back in the U.S.S.R.), making me wish that they had tweaked their arrangements towards the different types of covers they were performing. The harmonies in many cases are top heavy and of special note is the very loose arrangement of Mess. What I mean by loose is that the chords are structured very widely, so that The Yellowjackets are singing chords of octaves or more. The end result of this harmonic choice is that the melody kind of hangs loosely within this wide net of notes, leading to a very messy feel. Is it a mistake? Or is it genius? Who knows?

In any case, there are some great things about this album — the energy is great, the singing in tune (gotta love that), and production very clean and clear. The vocal percussion is also great, never sticking out too much, but always adding a steady groove. If only the soloists didn't suck! Oops, did I just say that? What I mean is that the soloists on Vision are definitely capable singers, but lack the confidence, practice, and, well, skill that their predecessors had, and that makes all the difference.

If Visions were the only Yellowjackets album I'd ever heard, I'd write a straightforward and encouraging review. These are the strengths, I'd say, and here's what they need to work on, and the next album should be better.

Trouble is, this isn't the only Yellowjackets album I've ever heard. Their last CD, Common Time, was a remarkably clean and confident piece of work with a few distinct and fixable flaws. Visions was recorded the following season, and I was eager to see whether the new lineup made progress in overcoming those flaws. I'm sad to say that The Yellowjackets apparently had a tough year. The flaws are still there, and new, more serious ones have appeared.

The Yellowjackets' old troubles, namely lack of spirit in block performances and under-mixing of the bass and ornamental lines, now compete with the surprising problem of underwhelming solo work. Issues with range, sustain, and confidence hold The Yellowjackets back. Many soloists just don't have the vibe for this rock and pop repertoire. Personnel shifts clearly had a lot to do with the arrival of this problem; the heavyweight champ of Common Time doesn't appear on Visions.

The Yellowjackets' tuning and blend are still well above the college average, but the stunning perfection of their block is gone with the wind. Was it the directorial shift? Lack of time in the studio? Who knows?

There are a few tracks which don't fit this mold. Soloists Jason Rotoli and Rob Gellman, together with adrenaline-fueled blocks, rock out on Mess and Back in the U.S.S.R., respectively. Some of the arrangements branch out a bit more, too; I enjoyed the well-placed quote in Imagine That and the goofy background lyrics in Say It Ain't So. Speaking of backing lyrics, do these guys have really tolerant parents, or are they hoping their moms won't notice the Jackie Wilson Said block singing about "smokin' doobie-doo"?

College groups, by definition, are re-invented every year. The Yellowjackets have a fantastic tradition to keep them going, and I have no doubt that they'll get through this rough patch stronger than before. In the meantime, I recommend that audiences pick up one of their earlier recordings.

CDs are available from Amazon, or by sending $15 per CD to:

University of Rochester Yellowjackets
207 Todd Union
Rochester, NY 14627
If ordering directly from The Yellowjackets, be sure to mention which album you would like.
×