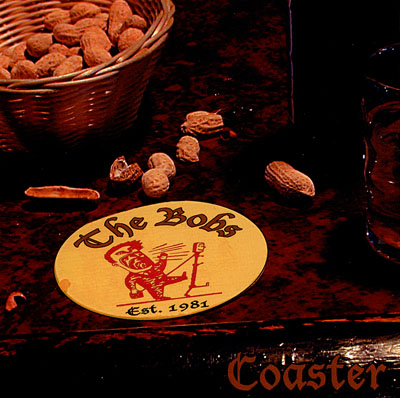 The Bobs are a cappella legends, known for more than 15 years of quirky, edgy and insightful music. Bottomless bass on one end and hyper-nasality on the other, The Bobs have a sound which is distinctly their own. Coaster, their latest, packs in a full 18 songs for the Bobs junkie in you.

Bring to Boil follows the inner thoughts of a potential genius as she eats her lunch. Check these lines:

From deep within the caverns of my being
Digestive enzymes yearn to be complete
They rally for a meaningful encounter
In short: I feel the sudden urge to eat

She Made Me Name You Earl is an ode to the power and mystery of women:

Yes. Muff. MUFF! And you must hear the absolutely tasteful way in which it's sung. Kudos.

And last on the list of favorites is Bach to Bach, a duet lyricizing a melody of the baroque master which must be heard to be believed.

If these quotes aren't enough to get you buying, then I gotta try harder, because this is a CD worth having.

A cappella pioneers The Bobs are often categorized as a comedy group. They're definitely funny, but don't buy Coaster expecting the slapstick a cappella humor most of us are used to. ("Look, the fat guy's singing Britney Spears!") The Bobs are more reminiscent of They Might Be Giants than of Jim Carrey. If you want, you can simply enjoy these songs for their quirky silliness. But if you take a second look at the poetry, you'll find poignant characters, social commentary, and a wry look at a cappella culture.

My favorite Bobs tracks are those that can be appreciated on both levels. It ain't Wagner, but The Turtle Cycle, a mini-opera chronicling the lives and loves of vivarium-dwelling reptiles, mixes absurdity with sensitivity to a pet's perspective. She Made Me Name You Earl is both a goofy ballad sung by a man to his favorite body part and an astute snapshot of heterosexual misunderstanding. This probably says more about my taste in music than it says about The Bobs, but a group could release a CD with ten tracks of squealing brakes, and if track eleven were She Made Me Name You Earl, I'd feel I got my money's worth. This is equally true of Hidden Bonus Track, my new RARB-reviewer theme song.

The Bobs have stuck to a recognizable, genuine vocal style throughout their twenty-year history, innovating through creative concepts rather than through instrumental imitation and nonstop studio effects. Listeners used to hyper-produced vocal bands or busy 16-voice collegiate arrangements may find the sound old-fashioned. I say, if it ain't broke, don't fix it.

Musically, The Bobs cover a lot of ground with just four voices and the occasional guest instrument. Through their homages, The Bobs display intimate knowledge of genres ranging from barbershop to classical to rap. The songwriting is not always the equal of the clever lyrics; I gave 4s to some tracks that didn't do much for me harmonically. But overall, these four compose as well as they sing.

While we're on that topic, they sing well. Although the solos are closer to solid than spectacular, the tuning and blend are so consistent that I barely remembered to listen for flaws. No big deal — there aren't any.

The Bobs were cool a cappella before a cappella was cool, and judging from Coaster, they have no plans to stop being cool any time in the near future. Any collection worth its salt needs a Bobs CD, and you won't go wrong by choosing Coaster.

The Bobs' greatest strength and their greatest weakness have always been the same thing: their audacity. No subject has ever been too taboo, and no lyric has ever been too unconventional. Occasionally, of course, such liberties go too far, and a song comes out which, one way or another, misses its mark. Fortunately, The Bobs have managed to get wiser over the years without losing their indomitable playfulness. Coaster maintains The Bobs' hilarious no-holds-barred writing, and does so with remarkable consistency and listenability.

This is the first Bobs album featuring Amy Bob Engelhardt, who is a welcome addition to their legendary chemistry. She is featured on the poetically mundane Bring to Boil and in Bach to Bach, a brilliantly conceived duet which, unfortunately, is hard to understand without the liner notes. Coaster also features the return of the collaborative songwriting team of (former Bob) Gunnar Madsen and a cappella guru Richard Bob Greene on The Druid Song, a cheeky yet reflective poke at the old Zen question about falling trees.

The production quality of this album is excellent, and from time to time reveals a little of the spiralmouth influence of Asylum studios, where it was mixed. The best example of the latest stretch of The Bobs' sound is Drive Time Blues. This funky tribute to commuter radio features Richard Bob on the bass lead, and is incredibly smooth, full, and rich. The vocal percussion is much fuller and more intricately layered than anything they've done in the past. So while The Bobs still can rely on straight-ahead four-tracked harmonic numbers like Barber Lips, they now have a new weapon in their already-formidable arsenal: that elusive mainstream contemporary quasi-vocal-band thing.

But when you listen to Coaster, you won't be struck by the production quality, or the identities of the major players. You'll be too busy smiling and listening for the next subtle joke or pun to drop out of your speakers. From overstuffed mall security guards through repressed genital-naming lovers to the conspicuously socially conscious, no one is safe from The Bobs' satire. The lyrics, as always, are refreshingly direct, piercingly and unforgivingly honest, and usually hilarious. I must admit to not quite getting the Turtle Cycle of songs, but the madrigal arrangement of Light My Fire was worth the wait. A handful of other solid numbers (of varying length) and one instrumental rock song (gasp!) are capped off by a rousing gospel tribute to the a cappella faithful, A Cappella Choir in the Sky. Throughout, the trademark bright-toned blended harmony is as perfect as ever, and the soloists are all convincing, sincere, and usually well suited to their songs.

So, yeah. If you've never heard The Bobs, your a cappella experience is incomplete; start here. It's hardly mainstream, and if you're the type that hears your music rather than listening to it, you may just not get it, since The Bobs' genius lies so heavily in their lyrics. But The Bobs are doing what they do, better and better: taking off the gloves and getting in a few good-natured potshots at the real world. Definitely worth a listen.