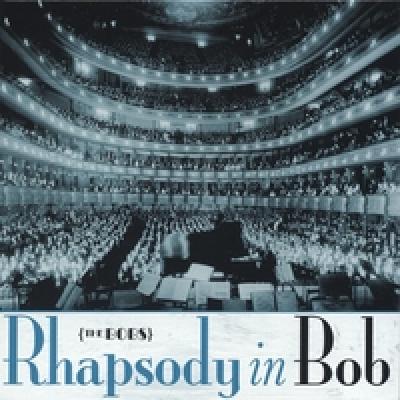 There are so many fabulous things to say about the Bobs, I don't even know where to start. A few years back, I actually sketched out an essay called "How I Stopped Worrying and Learned to Love the Bobs" but I never finished it because I couldn't figure out who would read it.

Seriously, the Bobs are stupendously good. Anyone in the a cappella ghetto who doesn't love the Bobs should be locked in a room with them until they do. With the recordings, that is — the Bobs are probably in the union and deserve better treatment. Who else does so much with so few voices, so little artificial interference? Who else spans so many genres so well, while always sounding like themselves? Who else is so crackpot funny on so many levels? And who else makes such damn fine music without ever losing sight of the essential a cappella silliness: Look ma, no instruments! Huh?

The Bobs, of course. It took me a few years to fall in love, but these days each encounter brings new bliss. I haven't caught up with the live show since the early days of the Amy Bob regime. But Rhapsody in Bob shows that the ex-KiCKSHAW, ex-Monkey Puzzle new Bob fits in fine. Dan Schumacher has the versatility for the Gunnar-Joe slot, with more solo energy but less percussion finesse than his immediate predecessor. Meanwhile Amy has grown into the trademark Bobs blend, Matthew remains the consummate singing straight man, and Richard Greene is his glorious self. The current group are all professionals, contriving a show that should sell without betraying their far-left-field roots.

Rhapsody in Bob is predictably fabulous, and by that I mean fab and predictable in equal parts. Dinner Bell is an apt opener, showing the group's clean, new, digitally recorded sound — and their recognition of the considerable demographic overlap between The Bobs and They Might Be Giants. Adding to the lure of the familiar, this album is all covers and has all the bases covered: a rehash of an earlier favorite (White Room) some pop-culture lyric rewrites (Freefallin, now a vampire breakup song) and a new gimmick (a piano). The new White Room gives you an idea of the latest trends, since the Bobs dusted off their old reliable arrangement with only a few tweaks. This year's version has much better production values. It's a little less discofabulous. And the solo rocks harder, while the old-school vocal percussion fills don't explode with the same energy (I went back to "Cover the Songs" to remind myself just how satisfyingly explosive it was).

A few words on the piano — it was a good call. For one thing, the Bobs found a good piano player in Bob Malone. For another, the piano frees them to do something new with vocalese Gershwin, instead of following sheepishly in the footsteps of the landmark David Wright arrangement for the quartet Ambiance. The Bobs arrangement sounds good, plays it fairly straight and still finds room for a few tweaks. I really like it, and I hope it gives their tour a new business life.

After all this time, it shouldn't surprise anyone that the Bobs remain a cappella's best of breed. Buy the album already and support one of our industry's longest-running success stories.

Passing 20 years, the Bobs are just as intelligent, silly, edgy and innovative as ever. Rhapsody in Bob is the latest in this great tradition and it does not disappoint.

The albums' title is named after it's longest track, a Bob-ized version of Gershwin's classic, Rhapsody in Blue. Now all you purists, try your best not to freak out that the piano originally imagined by Gershwin remains in full force on this recording. Palpitations should be eased by the Bobs' creative harmonizations, and of course their unique scat syllables. It's a delightfully impressionistic track, as if the Bobs were all taking a shower together, shampooing, soaping and humming along in perfect harmony while the talented pianist (which in my personal mental imagery is poised on the toilet, but wearing a tuxedo) plays a full concert grand. Clearly it's a big bathroom.

One thing Rhapsody in Blue shares with the six other all-a cappella tracks comprising the rest of the disc is that it's a cover that's made its way through the Bobs' filter. While Rhapsody is a balance between disparate forces, the remaining tracks seem a natural fit to the Bobs' style, They Might Be Giants' surreal Dinner Bell being the most perfect of these.

A little bit Spike Jones, a little Dr. Demento, this quartet is a hyper-nasal, hyper-active trio of a top and a singularly bottomless bottom. The Bobs are ever endearingly quirky, and though they usher in new members and bid fond adieu to others, their signature sound remains as distinctive and refreshing as ever, probably due in part to the influence of original members Richard Bob Greene and Matthew Bob Stull. Rhapsody in Bob is sure to sate a legion of fans' appetite for what only the Bobs can cook up.

The exterior of the Bobs' latest album depicts a concert hall packed with an audience in black-tie garb. Inside you get a picture of one member of the foursome chasing the others with a chainsaw. Chanticleer this isn't — but most of you probably already know that.

The Bobs seem to specialize in cross-eyed, arms flailing, wacky humor, and their no holds barred efforts got even this overly cynical curmudgeon chuckling. But how could I help myself? The track There Ain't Nobody Here But Us Chickens ends with a raucous cluck. I Was A Teenage Brain Surgeon kicks off with space-age "Mars Attacks!"-type effects and has a simulated real-time surgery soundtrack (complete with anguished non-anesthetized moaning) over the bridge. This is chuckle- but not laugh-worthy stuff, not quite reaching the heights of the Bobs compilation album I last reviewed. (The mere title of laundry-sex song "Share a Load" gets me sniggering like a 7th grader in health class ... )

Moreover, the two straightforward music tracks aren't great. A stripped-down version of Tom Petty's Free Fallin' moves pleasantly along, but by the end chorus you're left hoping in vain for them to really break it out. And the piano accompaniment somewhat overshadows the instrumental translation of Rhapsody in Blue — when compared directly with instruments, vocal mimicry can only go so far.

Not quite rhapsodic, but not bad either.